Today the national accounts came out for the December quarter, and things were bad - Australia's GDP shrank by 0.5%.
Obviously this means the Government's December stimulus package failed, and the so to has the $42b stimulus package that hasn't even started yet...
Well if you're Malcolm Turnbull it does:
"Their panicked decisions and old Labor style of spend, spend, spend is damaging the Australian economy, undermining our prospects and costing Australians jobs," he said.
"What troubles us in the Opposition is that this Government inherited a great situation and they have been squandering it in a panic with measures that have had little or no impact on our economy today, but will generate a very heavy economic drag in terms of higher interest rates and higher taxes in the years ahead."
Mr Turnbull says the figures prove that the vast bulk of the cash handouts, distributed in December as part of last year's stimulus package, were saved instead of spent.
It is worth noting at this point that the Liberal Party actually voted in favour of the package that Turnbull is now so roundly criticising as old style Labor.
Personally given the December stimulus package came out in the middle of December, and the "December quarter" covers October, November and December, I have very little belief that something that was in place for 2 weeks out of 12 was going to help all that much. So Turnbull's line that the GDP shrink shows the stimulus failed is bunkum, and also to an extent, is Swan's argument that the stimulus package made things better than they would have been.
It is true, but for the December quarter, it is only true to a small extent - Swan will be on firmer ground saying that about the March quarter. 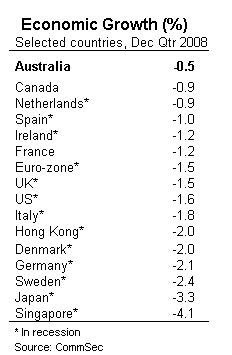 So things are bad. Obviously not too bad compared to some (the US, UK and Japan) but that doesn't really bring about too many smiles.
Most sensible people saw these figures coming. All I can say is it is a good thing the government has done something. Could you imagine if it had adopted a position of "wait and see"?
And what about the RBA keeping interest rates on hold yesterday? Silly or smart? I'm going with smart. Interest rates had been cut by 3% in the December quarter, and another 1% since then. At some point these big drops start having a diminishing rate of return. Ask yourself how many people do you think are holding out for another cut in interest rates before buying a house? Obviously the number is less now than it was when the cash rate was 7.25%.
So cutting them now would arguably have a small effect - coming as it would on the back of such big drops; better to hold off a month, see if there is any stability, and then drop them again if building is not picking up at all.
Interest rates drops are a bit like spending the surplus, at some point we will start to pay for it with increased inflation, and the rates will go up again - they won't stay this low forever. No need to drop them unless they have to - cutting them for the sake of cutting them is not in the long term interest of the economy, and now is probably as good a time as any to just have a stop to gather breath. If all that was needed to fix everything was to drop the rates to bugger all, then things would be easy.
Unfortunately they aren't.
And if you love graphs - the ABC website has a great page that shows the GDP growth figure, interests rates, unemployment figures, retail sales, and the current account from around 1990 to now. Very interesting reading. Check it out!
Posted by Greg Jericho at 6:47 PM