Flick of the Week: "Death's at the bottom of everything, Martins. Leave death to the professionals."

This week's Flick of the Week takes us with Trevor Howard from the wonderful romance of Brief Encounter to post WWII Vienna, and the classic noir thriller, The Third Man.

The Third Man, directed by Englishman Carol Reed, (yes, Carol is a man) is a stunning film. Made in 1949, from a screenplay by novelist Graham Greene, it is the greatest example of European film-noir (admittedly there's not a huge field to beat). It is also technically a film-adaptation because Greene wrote the story as a novella first so that he could then adapt a screenplay - as a novelist he felt he couldn't go straight to the screenplay.

The film stars Joseph Cotton as Holly Martins, a writer of cheap western novellas, who comes to Vienna just after the end of WWII to work for his old friend Harry Lime (Orson Welles). He arrives just in time to see Lime's funeral, and to also find out that Lime was wanted by the police for selling diluted penicillin to the local hospitals. Martins starts to have doubts about the story of Lime's death and begins investigating while the English Major Calloway (Trevor Howard) follows him closely. 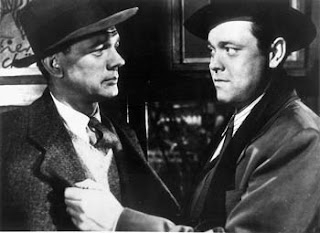 The mood of the film perfectly captures the ruined city of Vienna after the war - there is no beauty here, just buildings that seem like shells, and characters walking past rubble rather than cathedrals. But as brilliant as the photography is (it won an Academy Award for cinematography Robert Krasker), the real maker of the mood is Anton Karas' zither music. It may perhaps be a bit overused throughout, but it has the effect of immediately creating the European feel, as opposed to the standard jazz type score of American film-noir.

The pace of the film also adds to the mood - modern viewers may find it too dawdling, but it is a slow burn - the tension builds right the way through until the final great climax in the Vienna sewers.

The acting by Cotton is prefect - he plays the non-descript guy to spot-on effect. He is the hero of the film, but he is hardly a heroic type - he drinks, seems more happy with the plots of his cheap novellas than with reality, and doesn't look like he would ever get the girl. Against him is Welles, who in perhaps the smallest supporting role in film, absolutely steals the film. How he didn't get the Oscar for this is beyond me. OK, George Sanders was good in All About Eve, but come on!

The classic scene is of course that of Lime and Martins on the ferris wheel, with Lime's cuckoo-clock speech. Below is it in its entirety (excuse the Spanish subtitles).

The film was named as the best British film of all time by the British Film Institute, and oddly, came 57th in the American Film Institute's all time poll of American films. The AFI also gave it 5th place in "mystery films" - only behind, Vertigo, Chinatown, Rear Window and Laura.