Nah, the economy doesn’t need to see a Doctor

You know those annoying guys at work who get a bad cold and yet keep coming to work and end up giving everyone else in the office their cold? They’re they type who say, “Doctors? Pah! Bloody rip-offs, I don’t need to see a Doctor.” And then he gets so ill that he’s forced to go to visit the GP; it turns out he has Bronchitis and gets put on antibiotics – more bloody money wasted. After 2 days he feels better, so no need to keep taking those damn pills, and back to work he goes…. for 2 days before he is back home bedridden and back on more antibiotics after another visit to the doctor.

Well let me introduce you to the Liberal Party of Australia.

Last year the world financial system caught a bloody bad cold. The ALP decided not to wait till the economy flat lined, and introduced a range of stimulus measure – some short term, some mid-term, some long term. 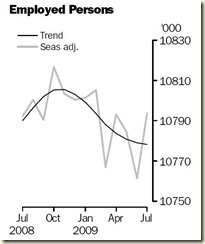 They worked. Retail sales stayed strong, as did housing prices. After a dip in GDP growth, it went back up (no one saw that coming), and unemployment? Well it stayed remarkably firm – not rock solid, and still pretty damn brittle in parts, but a sight better than expected. Today in fact the figures came out at 5.8% – the same as last month. Again well ahead of expectations – and showing an increase in employed persons (due to the increase in part-time work more than offsetting the decrease in full-time labour).

So what was the response of the Liberal Party? Here’s Andrew Southcott:

"Given that we are going to have to pay back the $77 billion that they are spending on stimulating the economy, it's really important that they reassess whether all of this is necessary," he said.

"What this does is really call into question the Government's assumptions about the size of their stimulus package.

Now before I relay his final comment, try and remember what the Liberals have been saying about the Government's stimulus? Yep, that’s right, it’s been a sugar hit – a one off thing that has no long term impact; a “cash splash” (a phrase the Liberal and National Party MPs have used in 92 speeches/questions in the House of Reps this year). Ok, here’s Southcott again:

"The maximum impact of the stimulus payments will not be felt for another 12 months."

Yep a stimulus which was all a sugar hit, is now not going to be felt for 12 months (sounds pretty long time to wait for the sugar to hit, must be that low GI stuff they spruik in the Milo adverts…) and thus the Libs believe Government should wind back the stimulus because errr it stimulated the economy even though it won’t be felt for 12 months…

No one with any nous is suggesting things are all smiles and sunshine for the economy. In fact here’s Malcolm Turnbull on 3 June in Parliament after the positive GDP figures were announced:

So for weeks he [Rudd] goes around the countryside appearing in a hard hat. We do not know whether he is seeking to impersonate Bob the Builder or audition for a part in the Village People—it is hard to say. But, whatever it is, he pops up there in his hard hat. And this process of impersonation is obviously appealing to him because today he decided to impersonate somebody else. He turned up in the press conference for his ‘mission accomplished’ moment. All he needed was a bomber jacket and an aircraft carrier and he would have been impersonating the former President of the United States.

(am I the only one thinking it’s weird that a Liberal Party leader would mock George W Bush, I thought only Mark Latham did that…oh wait he’s the Liberal’s Latham, I keep forgetting that)

So Turnbull thought there was more to be done. What about Joe Hockey? Same day, same line:

However, the weak state of the economy in early 2009 is evident when extracting the external sector, which added 2.2 per cent to GDP in the quarter. Domestic demand fell one per cent. Non-residential construction was down 4.3 per cent. Housing investment fell 5.6 per cent. Equipment investment was down 9.6 per cent. The government say that everything is okay—mission accomplished, they have done it all. Yet the fundamentals behind the headline figures are a major ongoing concern.

So there you have it. Back in June the Libs were criticising the Government for saying the job’s finished, now they telling them that the job is finished and they should stop spending money because the spending of the money is working even though it will only work in 12 months time and thus the Government shouldn’t spend anymore in case the spending of money which was working even though it hasn’t will errr keep working?

I don’t get it either.

All I know, is after spending time trying to keep up with the convoluted and inconsistent logic of the Liberal Party’s economic policies, I need a Bex and a good lie down… I feel like I could be coming down with something.