Tony Abbott Gets it Wrong in so Many Ways

Tony Abbott shoots his mouth off. Let’s be honest about it. He has done this his entire political career. He has especially been doing it since the ALP won the last election, and for the most part it hardly got a mention on the news. Occasionally back last year when he was going over the top with his love for Peter Costello it was a destabilising influence for Brendan Nelson, but really he was just the drunk cousin at the wedding, standing next to the silly uncle of Wilson Tuckey.

The more I look at Tony Abbott and his front bench, the more I believe Rudd won’t go to an election until at least July because they will want to let Abbott and his shadow Ministers hang themselves by their own words.

Take Tony Abbott during his press conference announcing his Shadow Ministry. I was watching it streaming live on the ABC website. He said the following:

“The Government was very vulnerable on economic management. With three interest rate rises in just three months, people think that the good times have gone”.

While watching this, I had a check of the ABC news page. The top story at the very moment he was saying the good time have gone was this one:

Business confidence has reached its highest level since May 2002, causing a leading bank to raise its growth and lower its unemployment forecasts.

This was just the start, however.

Yesterday, Abbott tried to make some mileage out of the leaked draft communiqué from the Copenhagen agreement. Now firstly this was a draft which makes it meaningless because there are a fair few of these things going around, and the important thing is the final communiqué. Saying a draft means something is akin to saying your first bid on a house is the maximum price you’re willing to spend. Next they’ll be saying you have to judge a novel on its first draft… But anyway, politics is politics so someone will always try to take advantage of a leak. Abbott fixed on the fact that draft suggested Australia would be asked to lower its emissions by 25 percent.

Now firstly this 25 percent figure is one that the Liberal Party is also committed to. Abbott confirmed this just last week! Both the ALP and Liberal Party agree that if the major emitters commit, then Australia will at best commit to reducing emissions by 25 percent by 2020. But let’s just forget that, because Abbott is in full scare mode. How did he react to the suggestion of a 25% cut?:

Err right. So Abbott pretty much multiplied the $120b figure (which is complete bollocks at any rate) by three and a bit to get to a figure of $300b to $400b. $400b sounded good so he kept running with it.

Unfortunately the Government came out and said he was a little bit out – only just, you know the odd $250 billion or so… But never mind, Abbott kept running with the $400b figure. Today on Steve Price he said this:

PRICE:
Now someone sent me a little message that there was a slight miscalculation, $250 billion concerning the ETS. What happened there, was that somebody else?

TONY ABBOTT:
No, no, the thing is Mr Rudd reckons that he’s got to whack on a $120 billion tax to reduce our emissions by five per cent. Now he’s talking about possibly reducing them by 15 per cent or 25 per cent. Now I said if it costs $120 billion it might be three or $400 billion to reduce it by 15 or 25 per cent just on a simple extrapolation. Now we’ve got the Government saying, no, it would only be $156 billion, only $156 billion in tax to reduce it by 15 per cent. Now Kevin Rudd has never produced the Treasury modelling and if there is Treasury modelling which says that you can get a 15 per cent reduction for $156 billion let’s see it. Let’s subject it to scrutiny. Let’s find out exactly how much prices are going to have to go up in order to produce this 15 per cent cut in emissions.

The only problem being he was wrong not just on the figure, but also on the fact of the economic modelling not having been released… (gee wrong in two ways in one statement – that’s some good work there! Climate Change economist, Frank Jotzo from ANU, helpfully gave Abbott some pointers on this whole thing:

"There's a very extensive Treasury modelling report that was released at around about the same time as the Government's White Paper. [Mr Abbott's calculations are] clearly wrong - wrong on the Government's, on the Treasury's numbers and wrong also on applying simple logic to it. That betrays a fundamental misunderstanding of what's going on here because the reduction is not from zero, right? The reduction is from what emissions would otherwise have been the case if we didn't do anything about it.”

Here’s a phrase you don’t want associated with you economic statements when you are Leader of the Opposition: “Fundamental misunderstanding”. Ouch.

And to make matters worse, today the unemployment figures came out:

Unemployment went down to 5.7%, economists were “surprised”, and pretty much all came out and made statements about how it had “peaked”. How’s this for some news for the Government:

That is, these are not part-time or casual jobs being created, they are full time. So unemployment falling, employment growing, and Abbott not 3 days ago had pronounced that the “good times were over”. Interesting…

But then Abbott is not known for the accuracy of economic pronouncements. Here’s what he said back in March:

The 0.5 per cent economic contraction in the last quarter of 2008 marks the likely beginning of the Rudd recession. It’s an imported recession but the Rudd Government’s policies will almost certainly make it worse.
… 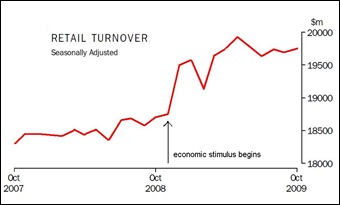 What Mr Rudd calls “decisive action” is nothing of the sort. It’s just spending money that the former government carefully accumulated. The $10 billion pre-Christmas cash splash might have boosted demand but it didn’t stave off an economic contraction and contributed nothing whatsoever to long-term structural improvements in the economy.

Ah the Rudd Recession, yep I remember that. It doesn't get much of run anymore. And about that $10b “cash splash” here’s what it did to demand.

I guess Abbott thinks all that money spent doesn’t create jobs, didn’t boost confidence. Confidence you ask? Let’s have a look at that:

So at November 2007, consumer confidence (on the left) was going down in line with the rest of the world. I wonder what the hell happened in October 2008 to cause it to move in an opposite direction? And what the hell has happened to have it now sky rocketing above the rest of the world? No doubt Abbott would say we’re so confident now because of things done by John Howard 2 years back…

Business confidence? Well as often happens when a change of government happens – especially to a Labor Government, business confidence was declining in November 2007 – in fact Australian businesses were bloody pessimistic.

Look where they are now! Again no doubt businesses are so confident only because of things done in 2006 under John Howard.

So there we are, unemployment peaking well below what anyone thought. And confidence booming. Is that important? Well here’s Joe Hockey (still Shadow Treasurer) back in March:

Pretty much since he made that statement, business confidence has been zooming up.

With such a great track record of economic missteps, I can see Abbott and hockey being a perfect team, and Kevin Rudd, Julia Gillard, Wayne Swan and Lindsay Tanner must be counting the days till parliament resumes.

Napoleon once said "Never interrupt your enemy while he is making a mistake"
Have you noticed how quiet Rudd has been recently?

Many companies all over the world need your opinions on their products. They will send you a simple online survey forms, where you need to fill it out and they pay you money.

The most remarkable thing about this paid survey program is that anyone can make money with it.
It doesn't require any special skills, training, education or previous business experience. You only need access to the Internet and basic typing skills.
It is the perfect home business for stay at home moms, students, home makers, retirees or anyone that is in need of some extra cash.