Flick of the Week: “We should have shotguns for this kind of deal”.

This week’s Flick of the Week takes us with Frank Whaley from his starring role in the Hollywood satire Swimming with Sharks to his bit role in Quentin Tarantino’s Pulp Fiction. 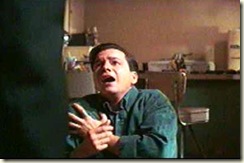 Frank Whaley is one of the best “That Guy” going around. He’s been in small but key roles in Field of Dreams, Born on the Fourth of July, JFK, Hoffa, Pulp Fiction, and Broken Arrow. For whatever reason – and maybe it has to do with the fact he looks a bit like Jon Cryer he never really cracked it for a lead role in any big film or TV show. Nonetheless, a look at his imdb page, and you can see he is rarely out of work.

His role in Pulp Fiction is of the poor “Brett”, a young guy about to meet an untimely end via hit-man Jules (Samuel L Jackson).

But enough trivial chit-chat, let’s get into character (as Jules at one point says): Pulp Fiction is quite possibly the most overrated movie in cinematic history, and if not, then definitely of the 1990s. When it came out it was lauded as though it was a breakthrough in film – mostly because it has a fragmented narrative structure (hardly a revolutionary concept – one would think film critics had never read a novel written after WWII). Even now it remains quite beloved by film fans – imdb has it at Number 5 all time.

The high critical acclaim began almost before the movie was even finished. Tarantino was the early 1990s film golden child, by virtue of his first film, Reservoir Dogs. That film had been a cult hit – one that film lovers saw and made note to watch out for this guy Tarantino – and Pulp Fiction was his next one – it also had a stellar cast, including John Travolta in his “comeback role”, and early word was the script was amazing – apparently even better than Reservoir Dogs. I can proudly claim to have been one of the few in Australia who saw Reservoir Dogs in the cinema. One of the few? Yep - it only made $767,000 in this country – making it only the 86th most popular film that year – more people in this country saw Cop and a Half than did Reservoir Dogs. That film – like Pulp Fiction – involved Tarantino playing around with the linear narrative. But whereas in Reservoir Dogs there was a purpose that actually heightened the tension of the story; in Pulp Fiction it seems to be done pretty much because Tarantino feels like doing it.

The film is divided into 7 ‘chapters’:

If you were to watch the film chronologically it would be  4a, 2, 6, 1, 7, 3, 4b, 5 (cheers to Wikipedia for doing my thinking for me on this!). Would anything be lost were it told in that order? I somehow doubt it; except that it would no longer be “breaking the rules, man!” And I guess that was the whole point. 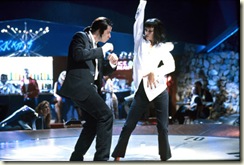 The film, concerning hit men, robbers, fighters and assorted low-lifes, became the Generation X movie. The film that the teenagers who loved Heathers had been waiting for – here was the generation’s Citizen Kane, a movie to stick it up the olds and their nostalgia for the 1970s film – we could do it just as well!

And as befitting the generation, the film is essentially about nothing. Nothing much happens that really stays with you afterwards except for all the chit-chat between the characters. It is certainly good chit-chat, but superfluous chit-chat nonetheless.

There are parts of an interesting film here, but other parts that seem to be there only because no one felt like saying no to Tarantino – the last half of “The Bonnie Situation” is a case in point. 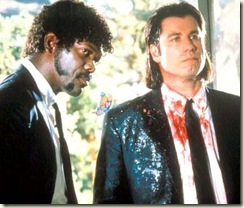 It involves hit-men Jules and Vincent (John Travolta) needing to take cover in the house of Jules’s friend Jimmy (Tarantino) as Vincent has accidentally shot someone in the backseat of their car. The problem with the scene is two-fold – firstly, Tarantino can’t act; and secondly the denouement involves a suave guy called Winton “the Wolf” Wolfe (Harvey Keitel) coming to their rescue. His big solution is to clean up the blood over the car, put the body in the boot and cover the back seat with blankets. After coming up with this amazing solution everyone stands around looking at the result saying how incredible it all is. I remember watching it thinking, huh – they cleaned the car, so what?

Perhaps I am being overly critical – but with this film, I say it could do with some real criticism, rather than the fawning admiration of all its faults – the biggest of which is the bizarre and pretty pointless scene involving Zed and “the gimp”.

There is great stuff here – the scene with Christopher Walken in the flashback part of Prelude to “The Gold Watch” is brilliant, and the opening dialogue between Jules and Vincent over the “what do they call a quarter pounder with cheese in France” is brilliant trivial chit-chat at its Tarantino best, and the Travolta and Uma Thurman storyline (she is the wife of his boss) is engaging. But when I was thinking about the film, I realised I hadn’t seen it in ages – perhaps 5 or 6 years – and I have to say I don’t have any real compulsion to see it any time soon. I don’t even own it on DVD, and when I see it at JB Hi Fi for $15 I think… nah, too much.

In many ways I prefer Tarantino’s next film – Jackie Brown, and definitely Kill Bill Vol I (not a fan of Vol 2 however).

I know I am shouting against the wind here, Pulp Fiction will continue to poll well in film magazines’ “Best film of all-time” polls – a bit like Nirvana’s Nevermind will continue to poll well in “Best album of all-time” polls so long as Gen–Xers keep voting. But while I have no issue with a story being about nothing (hell, I’m a guy who loves Ulysses), if the story is barely there, the characters should be important, and for me the characters here are just as ephemeral as the plot – the soundtrack is deeper than the  characters.

Just like the pulp fiction novel this film aims to replicate, the movie is essentially an enjoyable bit of throwaway trash. This is not meant to disparage it – well done throwaway trash is damn hard to do, and when done well (such as in most of this film) it is glorious fun. But fifth best film of all time? Sorry. I wouldn’t even have it in my Top 50. I wouldn’t even have it in my Top 5 all-time crime films – better are The Godfather I and II, Goodfellas, The Maltese Falcon, The Big Sleep, Chinatown, A bout de souffle  (and that’s without even really thinking).

But let’s not be too harsh: it is in my Top 5 John Travolta films. For what that is worth…. 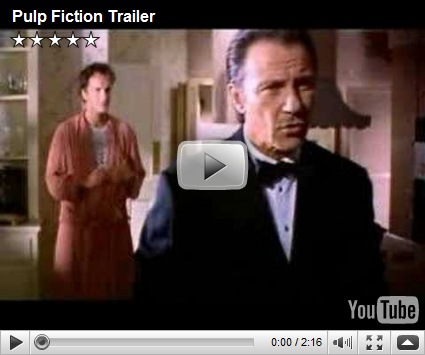 Just came here via today's flick of the week.

Interesting to read this as i guess i was one who had always considered Pulp Fiction to be pretty well up there but now i think about it i'm certainly reconsidering it a bit.

I think i'd still rate it better than you do here, really want to watch it again now, but i think your criticisms are pretty well spot on. Certainly agree that Reservoir Dogs and Jackie Brown seemed to have more of a reason for the non-linear storyline which, yes, was a big reason why i liked Pulp Fiction first time around. I was a lot less experienced with such devices at the time.

When it comes down to it there are two main things i like the most about the movie, and they are two things to like about Tarantino's work in general - one being the "coolness" of all those individual moments, and the second being the great musical choices. Perhaps the title of "pulp fiction" is most apt for such a classic Tarantino film as so much of what he does is based around cool, memorable, and quotable moments that everyone loves and that go onto be sampled as cultural specimens in much the way that so much of his own work is referencing those that came before him. It was even just on the way home tonight that i was using the "we're all gonna be little Fonzies, and what's Fonzie? He's cool. So we're all gonna be cool" bit in a conversation. (Not needing to list every "cool" Pulp Fiction moment, but "mmm-hmmm, that is a tasty burger" is also one i get good use out of)

On the second point, i simply love Tarantino's use of music in that a) he uses existing songs and b) it's basically always music that is part of a scene and not for effect (and how i wish i could remember the terms for those two.) Not that i have a problem with music as an effect but, as an example, think of the use of "stuck in the middle with you" in Reservoir Dogs. Cool and The Gang's Jungle Boogie in the "Royale With Cheese" scene is a sensational choice for mine, a perfect backing to what, as you said, is a great piece of back and forth dialogue. The whole soundtrack is great for mine. From Dusty Springfield; Son of a Preacher Man, and Al Green; Let's Stay Together to something like The Statler Brothers; Flowers On The Wall and to the classic Miserlou by Dick Dale and the Del-Tones, it's all full of win as far as i'm concerned.

Anyway, just felt compelled to add that comment, especially as it's a Gamut post without any comments! HOLY CRAP! :-P