Because his Lips are Moving.

Just quickly because I did do an update on this last night, but if you haven’t seen Tony Abbott’s interview on the 7:30 Report last night, firstly you can disqualify yourself from membership of the political nerd club, and secondly you should do so now 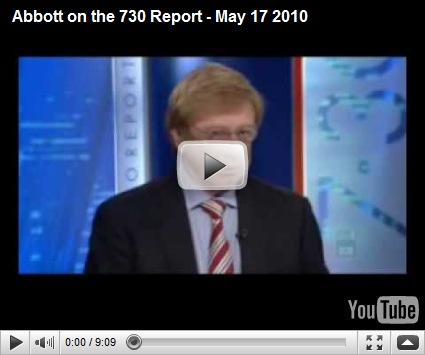 Now, there have been many a column inch written on the interview, the one I agree with most is that by Phillip Coorey, where he writes:

Abbott cultivated his image by cleverly managing to direct the focus away from the many policy positions he has had on climate change, for example, or his broken "no new taxes" pledge, and to concentrate on the government's track record.

Abbott's performance on the 7.30 Report last night makes a mockery of that straight talking claim. By his own admission, Abbott urges people to treat with caution anything he says during the so-called heat of discussion.

The only utterances that can be taken as gospel truth were carefully prepared and scripted remarks such as those made during speeches or policy announcements.

If you believe anything else he says, then you are taking a punt.

Coorey then gives us a nice example of how this now causes us to question everything Abbott has said:

The heat of discussion includes radio interviews, press conferences and, surely the most heated forum of all, the Parliament. These various forums comprise the great bulk of public comment by politicians. Abbott, like the rest, now prefers talkback radio as the medium to get his message across.

Indeed, it was on talkback radio in February that he promised no Coalition policies would be funded by new or increased taxes, a promise he broke a month later when he announced a paid parental leave scheme funded by an increase in company taxes.

If this caveat now applies to talkback radio, does it mean, for instance, that when Abbott told Alan Jones yesterday he did not back Fred Nile's call to ban the burqa, that he was possibly lying and could well change his mind?

Coorey also brings up the attempt by the Liberal Party MPs (and some right wing talkback radio hosts) to spin what he said:

Abbott's boosters were claiming this morning that all the Opposition Leader was saying was that politicians sometimes do not tell the truth and that he should be applauded for this.

The problem of course is that Abbott was not saying anything of the sort, he was specifically saying when the heat is on he’ll make stuff up to win the argument. Here’s his words (note that Kerry is actually giving him a chance to correct himself, but Abbott doesn't see it, and instead hangs himself some more): 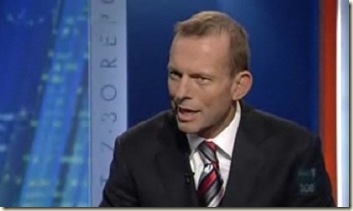 KERRY O'BRIEN: So every time you make a statement, we have to ask you whether it's carefully prepared and scripted or whether it's just something on the fly? No, seriously; this is a very serious question.

TONY ABBOTT: But all of us, Kerry, all of us when we're in the heat of verbal combat, so to speak, will sometimes say things that go a little bit further.

Some are trying to equate this with broken promises – ie Rudd lies about climate change, he lied about child care centres etc. But this is not about breaking promises, this is about not even intending to keep the promise in the first place – and Abbott in this case has specifically admitted that on the promise not to bring in a new tax he didn’t mean it at the time he said it.

We know Rudd meant to introduce an ETS – because he actually did introduce and ETS! You can say he should have done better, and he should call an election on the issue, but that’s a different point. All politicians always will break some promises – things change; things that sound good in opposition don’t look so good when you’re meeting with the folk from the Treasury and Finance Departments and they tell you how much things will cost, and how much money you have to spend. They should be criticised when they break them – and it is up to them to give damn good reasons why they have broken them.

But the one thing every single political journalist and opposition MP is after is proof that when the Government said they would do something, that they had already decided not to do it – ie to catch them in a lie. You know – How does the Minister’s statement to introduce Program X square with this leaked Minute from his Department dated two weeks prior stating that the Program X was to be scrapped?

Catching a Minister/ PM / Opposition leader in a lie is the whole ball game.

But Abbott is saying that that whole thing doesn’t matter because if it isn’t a “carefully prepared and scripted remark” you have to assume it could be a lie or not – it’s up to you – if you’re foolish enough to believe it, then it’s not his fault.

KERRY O'BRIEN: But we are going to hear a lot from you over the next few months leading up to the election and what you are saying ...

TONY ABBOTT: You're not gonna hear any big promises from me.

Really Tony? No big promises from you during an election? None? Nothing? So what are you intending to say during the election campaign – “Vote for me, because I promise nothing”? You see as soon as he does make a promise to do anything, journalists are well within their rights to ask why is he making such a promise given he promised not to do so on the 7:30 Report. They can then follow up by asking whether if the promise he is making is carefully scripted.

Not good, not good at all.

I don’t think this will make too much of a hit in the polls – the polls at the moment are still mostly about the Government, but I think this has pretty well killed the election for him, because it will follow him around like the proverbial bad smell.

But there’s one bright spot from the interview – it also provided the Liberal Party with its election slogan: Vote Liberal – The least bad way of doing it.

Your reading comprehension skills leave something to be desired.

Tone said that he is not honest - if his lips are moving, and he's not reading from a script, then he is lying.

He should hang his head in shame, because he says that he will say whatever it takes, on talkback radio, in parliament, wherever - whether it is true or not - just to win an argument.

As Grog says, what Tone is doing is saying that he lies.

He is not honest.

He has not changed his mind, he knew it was a lie when he said it.

Grog, I guess in Abbott- speak these would have to be unscripted, i.e.untrustworthy, words - any promise would be foolish given his previous admissions, but this one was a doozy. He won't be able to credibly open his mouth on anything in the election campaign

By the way, ~~Just Me in T~~ (if that is your real name), you're doing comment spam wrong. Your name is already a link; you don't need to put another (non-clickable) link in the comment.

In a way it's almost nicer to have a politician who is completely honest about being a liar than one whose every public utterance is algorithmically generated to minimise the risk of saying anything meaningful enough to technically qualify as a lie (i.e. Rudd). But it another way it's not so good to have a politician dumb enough to not only announce this fact in public but insist on it when questioned. Note to Abbott: you're supposed to wait until after the election before you work out which promises are non-core.

Geez he really did put in a shocker, I mean he didn't even give his book 'battlelines' a plug

I mean he didn't even give his book 'battlelines' a plug

I believe him on this. Given his past record, Abbott intends to do nothing but repeat "great big new tax" and be negative and aggressive. Just as Hockey got lumped with actually replying to the Budget (a week late), any promises/policies they might be forced to reveal will come from the shadow ministry - and Abbott can then say, hand on heart, *I* never promised to do that.

If I have to read one more Liberal apologist, Abbott loving comment to the effect of 'how refreshing, he's telling us the truth', I'll vomit. Actually vomit.

Then I'll laugh because said person is an idiot and right down there on the level of Abbott.

So Abbott tosses responsibility for the budget reply to Hockey, who ducks and yells "catch it!" to Robb. Is this a alternative government or a rugby team?

I was with a Lib the day phoney Tony won the leadership in that landslide vote, and his comment was "...forgive them, for thet know not what they do." Surely Malcolm has sat on the "naughty chair" long enough,Wilson, so in the words of that geat Melbourne coach, when his team was down and out at 3/4 time, "Do something!!"
Memo to Kev, "Don't call an early election...with Sloppy Joe as the only alternative (I'm ruling out Kevin Andrews), this lot will start eating themselves as soon as they get together again...next week.