The interest is on things that really matter.

On most days when the Reserve Bank makes a decision on interest rates, it’s a good bet it’ll be headline news. The Australian media (with some good reason) is pretty obsessed with interest rates. A decision to increase rates by the RBA becomes the single easiest decision for any news editor on what story to lead with in the 6pm news or on the front page the next day. Admittedly a decision to leave rates alone is less of a news-worthy item (no news like bad news), but still it would rate. 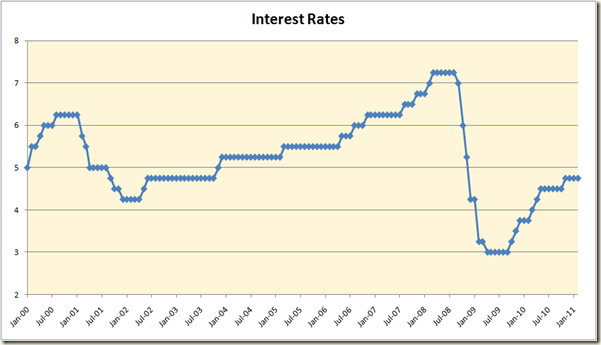 This is of course a wonderful thing for mortgage holders, and it points to a pretty healthy economy – the unemployment rate is at 5 per cent, and yet the RBA is at present not so concerned about inflation that it feels a need to nip it in the bud.

As we can see from below, that is because underlying inflation is right in the area the RBA should be comfortable. Yes it’s above 2 per cent, and we might like to hope that below 2 per cent will become the long term average, but when you look at the last ten years, you see anywhere around 2.5 per cent is pretty good. 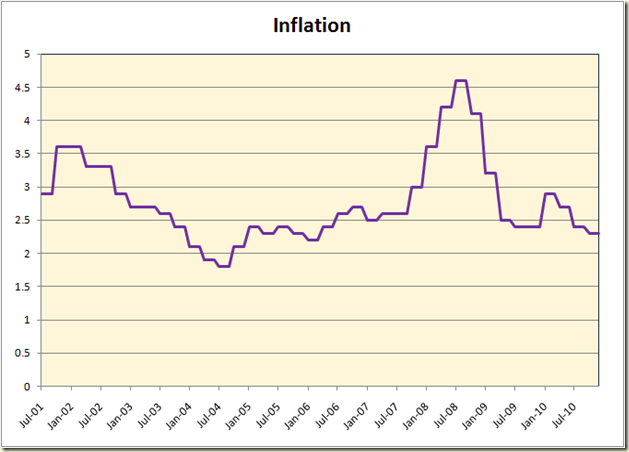 Unemployment, as I said, is ticking along beautifully, and heading back down after the horrors of the GFC were handled nicely by Rudd and Co. 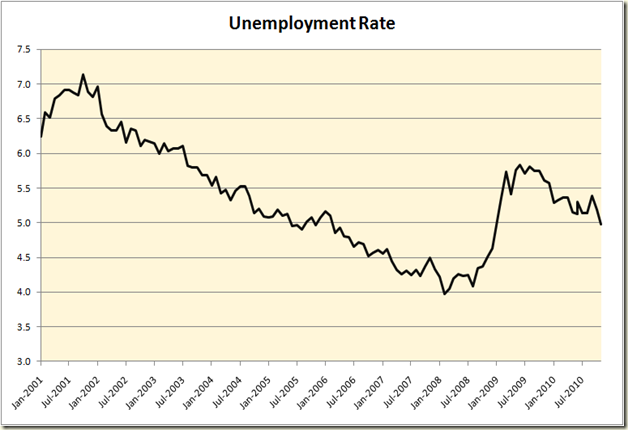 How nicely did they handle it? Let us remind ourselves of our American cousins: 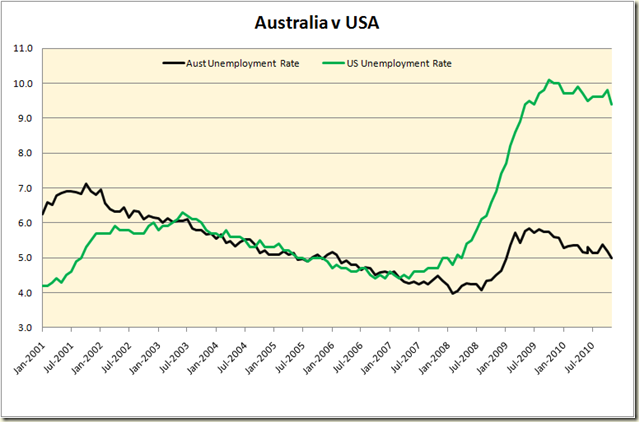 (Cue Andrew Robb with, “If the stimulus worked, why is the unemployment rate in the US at 10 per cent” – my response – “It worked because we’re not at 10 per cent – live with it”)

The RBA statement had this to say:

Employment growth was unusually strong in 2010. Most leading indicators suggest further growth, though most likely at a slower pace. After the significant decline in 2009, growth in wages picked up somewhat last year.  Some further increase is likely over the coming year.

Inflation is consistent with the medium-term objective of monetary policy, having declined significantly from its peak in 2008. Recent data show underlying inflation at around 2¼ per cent in 2010. The CPI rose by about 2¾ per cent, reflecting the once-off effect of the increase in tobacco excise. These moderate outcomes are being assisted by the high level of the exchange rate, the earlier decline in wages growth and strong competition in some key markets, which have worked to offset large rises in utilities prices. The Bank expects that inflation over the year ahead will continue to be consistent with the 2–3 per cent target.

This is all good news that pretty well destroys the arguments of those commentators who were predicting a wages blowout post the introduction of the ALP’ s industrial legislation laws. In fact things are going along very nicely… 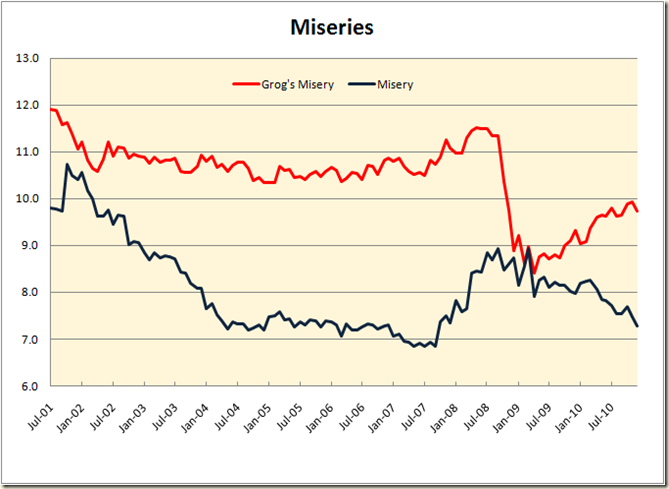 Hard to get worried about that. The traditional misery index is around where it was for most of the Howard glory years, and the Unemployment + Cash Rate index is at “record lows”.

But what about the future? What about Joe Hockey’s plaintive wailing about the inflation rate and the price of “fruit and vegies” and the impact of the floods on inflation due to capacity constraints brought about by the Gillard Government’s wilful spending, and thus wages blowout?

The flooding in Queensland and Victoria is having a temporary adverse effect on economic activity and prices. Some production of crops and resources has been lost and some other forms of economic output have also been lower in the affected areas.
The floods also resulted in damage or destruction to physical capital in the affected regions. Over the next year or two, the efforts to repair or replace infrastructure and housing will add modestly to aggregate demand, compared with what would otherwise likely have occurred. The extent of this net additional effect will depend on the full extent of the damage, the speed of the rebuilding, and the extent to which other public and private spending is deferred. The Bank's preliminary assessment is that the net additional demand from rebuilding is unlikely to have a major impact on the medium-term outlook for inflation.

So much for that then…

But why is this not front page news (aside from it being relatively good news)?
Well because of another chart – a chart which shows that mortgages and unemployment and inflation are not the most important thing in our lives (but that the lives of ourselves and our friends and family members are):

Cyclone Yasi is bearing down on Cairns. In the last 24 hours the path has shifted up from Townsville to the northern beaches of Cairns to a little bit further south where it looks now like hitting somewhere around Gordonvale.

It now looks almost certainly to be Category 4, which means massive destruction for anything in its path (and remember the most destructive force of the cyclone is front left) – ie south-west of the eye).

What is worse is even after it has hit land it is expected to stay as a cyclone (Category 3) for a good while as it heads in-land. This is not good (understatement there). Most cyclones hit the coast and the become low depressions. This one looks like it wants to keep on pounding long after most give up.

The infra-red shot of it it truly horrifying: 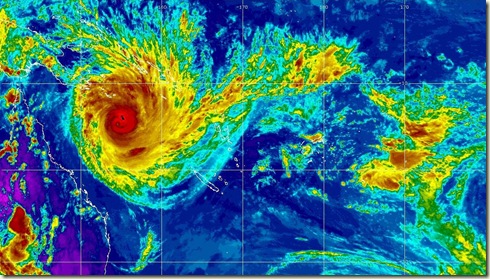 It’s not often you get scared by a weather map, but that picture has me as worried as any of the pictures of violence coming from Egypt. It’s like watching a photo of two road-trains just before they have a head-on collision.

To those up north, stay very safe. I know many down south are thinking of you.
Comic Jester on Twitter reminded me tonight that after Cyclone Larry hit in 2005, Miranda Devine, displaying all the compassion she could muster, wrote a piece stating:

I'M sorry, but if you live in a place prone to cyclones every 80 years and a cyclone comes along after 80 years, what's the surprise?

We in Sydney are very sorry for the people in northern Queensland who have lost their homes to Cyclone Larry. But, much as we will miss their avocados and bananas on our supermarket shelves, we can live without their whingeing.

Here’s hoping after Yasi has hit, we see little damage or human injury (whether from winds, or the often forgotten storm surges), and from the media, here’s hoping we don’t see examples of the above being expressed. 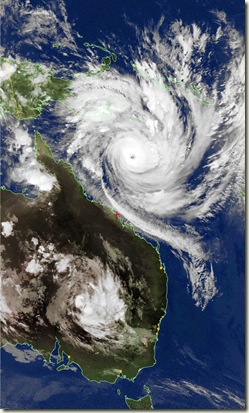 And so we wake to the worst news possible. Cyclone Yasi has been upgraded to Category 5. Its eye has an air pressure of 920 hectoPascals. With cyclones the lower the pressure the worse they are. Anything below 950 is terrible news. The winds associated with it are currently around 295km/h.

That is beyond comprehension.

At such levels hyperbole is not enough. When you have winds of 295km/h the laws of physics are for nought.

The path has moved more south – Innisfail is right in the middle of the target zone, but when the eye is 125 km wide it is not going to matter all that much to the people of Cairns, who in normal circumstances (say a category 2-3) would largely miss out on the destruction. And what is worrying as well is that a storm surge of around 2.5m above the highest tide is expected to hit.

It is expected to hit around 9pm-10pm tonight.

The infrared image is here.

It looks like Van Gogh’s Starry Night as though painted by a visitor to hell. 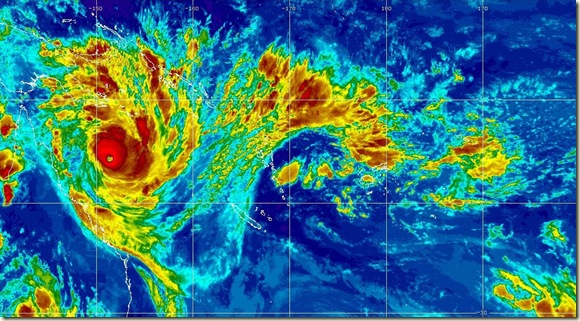 What are the chances the winds will take away Miranda Devine? She's a stain on the reputation of New York.

Yasi scares the crap out of me too. But you already know my experiences with Cat. 4 storms.

If only the stimulus in the US had been MORE. Perhaps the unemployment wouldn't be at 10% and we would've seen more of a recovery.

Of course, things could be much worse. In a sense the Obama stimulus package did work - it kept America from slipping further into depression. It just wasn't enough to keep the US from falling in the hole in the first place.

Then again, what do I know?

Right on, to all Queenslanders, stay safe, we down south are thinking of you and keeping fingers crossed.
Yasi is a terrifying sight even just on a map. I sat through little cyclone Max in the NT years ago and it amounted to not much in the end but the waiting is horrible. Stay safe.
Grog, the more the Coalition speak the less relevent they seem, but their supporters are loyal and determined,....and ruthless.

Its really scary stuff. They are expecting 1 METRE of rain to fall in 24 hours. Looks like Bob Kattar will get in on the money action for North Qld after all.
Category 5 I can not imagine

Has Barnaby Bubbles demanded we need more wind farms yet?

Chemtrailing forever and globally is finally catching up, may 21 2011 great earthquake due to harp, geo engineering weather modification death programs will kill billions around the globe, so if you are still alive get out early that day, you may survive, but who would want to as these are the last few months before obamageddon oct 21 2011 when the world obliterates thanks to the new world order of annihilation of planets, earth scheduled for termination.