I thought is was a good speech. The speech was obviously tailored for the American audience – lots of ‘you guys are great’ etc. The key of any good speech is to know your audience. The PM knew this audience and she hit them right where they like to be hit (yeah she made John Boehner cry – and if you can’t do that, you really have missed the mark). All up I think she did us proud.

It won’t convince those who really don’t like her to like her – because I think they’ve pretty much decided their views on Gillard. But for the rest of us who don’t feel the need to mention make-up every time we write about the PM, I think there’s not much to criticize about the speech – a few clangy syntaxes (‘transitioning’) aside.

The right-wing op-ed writers and shock jocks of course will like to make much of the fact many in the audience were staffers and ignore that when Howard addressed the Congress back in 2002, only about 10 per cent of the congress showed up.

Finding not much to disagree with the content of the speech, the next step of the right-wing is to say she actually sounded like Howard, or perhaps suggest that the left would have gone nuts had Howard given such a speech. That’s a fun game to play, you can do it for lots of things: like for example, imagine if John Howard were the one introducing a price on carbon, what would be the reaction of business, The Australian and right-wing shock jocks?

The problem I had with Howard and his relationship with the US was not his obvious kowtowing to Bush (oh OK, I had issues with that), but more the dopey sense that because he and Bush were “mates” somehow our alliance was stronger. What bullshit. The US-Australia alliance, aside from when Nixon and Whitlam were in charge, has been as close as you can get without indulging in under the sheets action. It will ever be thus. Yeah Obama went with Gillard to the school – it was nice to see and showed they get on well – but it doesn't mean Australia is now somehow at the top of his agenda, anymore than the Howard-Bush dynamic meant Howard was at the forefront of Bush’s mind. 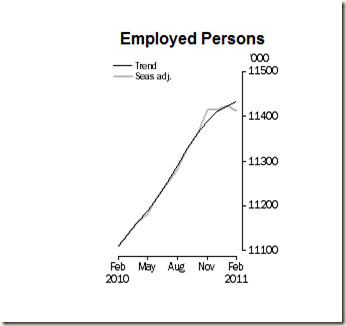 So a good speech; nicely delivered.

Back home the unemployment figures for February were released. They were pretty good. Not great, but good. Solid at 5 per cent where it has now been for 3 months.

The actual number of employed person went up – but it was mostly due to part-0time employment going down (57,700) while full-time employment increased (47,600).

The big decline in part-time employment was in QLD – so next month, after the impact of the floods has declined its likely the rate will go below 5.0.

And then of course we’ll get lots of talk about wages break out, inflation, and then interest rates (of course – all economic reporting must refer to interest rates).

And there will be those who will say we need to reform the labour market – undo the Fair Work Act and all of Labor’s union-loving policy.

So let’s have a look at the data. Here’s the Labour Costs from the RBA’s statistic pack for the last five years (apologies it only goes to June 2010, but it gives a good view of things): 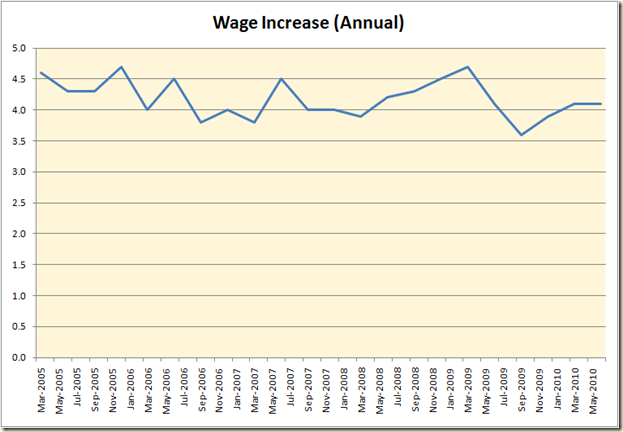 How about strikes? Surely there the evil unions are just killing business: 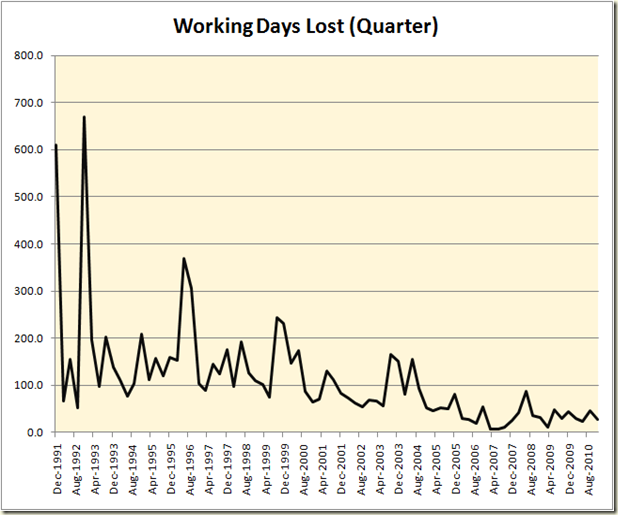 So unemployment solid, labour costs and labour disputes stable; the PM over in Washington delivering the goods.

Sure sucks to be under an ALP Government...

Just a quick note to say there won’t be a Friday Night Relaxer post tomorrow – real life intervenes, so have a good weekend all.

Yeh the PM has done a great job this week and the kids havent been too naughty while shes away. ALP picking a fight with the Greens over Gunns is timely and should do the govt little harm

Agreed Sonia. Christine Milne has just been reminded that influence is best wielded quietly and that she and the Greens need to be careful not to start believing their own publicity and getting too far ahead of themselves.

Dunno who interviewed Combet on the radio somewhere in Australia today (I think his first name was Michael - I only heard grabs on the commercial radio news) but it was unbelievably disrespectful, not because Combet is a Minister, but because he was a guest on the show and should have been accorded that courtesy. The DJ was, and this is the best way I can explain it, verbally rolling his eyes, with lots of moaning and sighing.

Does anyone remember the DJs doing this with Howard? Does anyone remember DJs addressing Howard as "John", other than when they were trying to cosy up to him or were serving him a big dose of "help yourself"?
These uppity turds really need to be flushed back down again.

It was a well structured speech and the PM delivered it with aplomb. She looked and sounded confident.

How scary to be called upon to address a Joint Sitting of the US Congress when you have been head of Government for such a brief time and had limited experience in international relations. John Howard had been in the job for some six years when he addressed a similar Joint Sitting in 2002. I listened to the first 6 minutes of his speech and he sounded more than a little over-awed. http://australianpolitics.com/2002/06/12/howard-addresses-us-congress.html

Gillard did a much better job than Howard of portraying us as a self-confident people. If the Shock Jocks want to talk about gush and sycophancy check this from Howard:

“In these past months President Bush has displayed the tenacity, the strength and the depth of character of a great leader.

And he is now applying those qualities to the dangerous tensions between India and Pakistan and the intractable differences in the Middle East.

It is a special privilege to return to this historic place to address the representatives of a people with whom we share so much and express the fond regard and high esteem in which we hold your great nation”.

Gillard at least told them a couple of things that they needed to hear for their own good and the benefit of other nations. Howard said, “We have taken our place beside you in the war against terrorism, knowing beyond all doubt that it was an attack upon ourselves and our way of life as surely as it was upon your own”.

Gillard is beginning to grow into her role quite nicely.

For a more detailed and typically excellent analysis of the Labour Force data check out Bill Mitchell (@billy_blog) at http://bilbo.economicoutlook.net/blog/?p=13758

Did you watch the Paul Krugman interview on TimesTalks? Worth the hour and a half investment...

I am disappointed that a timorous Prime Minister Gillard missed a golden opportunity to gain US valorisation of Australia’s plan to lower the world temperature, corral carbon, and stop the nasty trend of rising sea levels. Instead, she opted for a trip in the time machine and evoked memories of a bygone time with her speech ending on a lachrymatory note.

Actually Sir Ian, one line that PM Gillard did not get a big clap for was separating economic growth from carbon growth.

Yeah, she went there, but certainly didn't stick beat anyone over the head with it.

I’m glad you enjoyed Julia Gillard’s address to a room full of congressional staff and interns, Grog. The underlying theme was enduring; you start the wars and we’ll help fight them. Burning young Australian lives to curry favour is no real problem. I cringed.
Like Gillard, I too watched the moon landing with a bunch of mates from uni. I remember correctly, apart from the skeptics in the room, the rest seemed to be of the opinion that all you needed was the money to hire the engineers and build the hardware and you were there. I don’t recall anybody at the time thinking, as Gillard did at the early age of seven years old, that what happened was something that could be attributed to an “amazing people”. It’s a shame that she didn’t recall that at the same time the US was sending men to the moon, it was also trying to send the Vietnamese people back to the Stone age.

I think Julia Gillard did a fine job in how she said what she said. I think though that the message she sent though left much to be decided. There was no way Howard was ever going to really embrace China and Asia, he was to stuck in the 1950s to choose them over the US. Concerning to see someone more progressive retreat to such a conservative and dates foreign relations position in pledging perceptual, undying loyalty.

Yeah, sure sucks being under an ALP government!!

And, if you were to believe that right-wing media it does suck.

On that thought - we should all play the game of follow the money. Think about Bolt, Ackerman, Shanahan, Jones, et al - their paymasters are egging them on 'cause its profitable. Its selling ad space.

Ipso Facto - Bolt, Ackerman, Shanahan, Jones, et al can't change their position on climate change, social democratic political parties, etc because they would be out of a job.