So the quarterly inflation figures came out today.

The CPI came in at 3.6%. It was a little bit above what the market was expecting. How do we know this? Check out how the exchange rate market reacted. See if you can pick the moment the figures were announced: 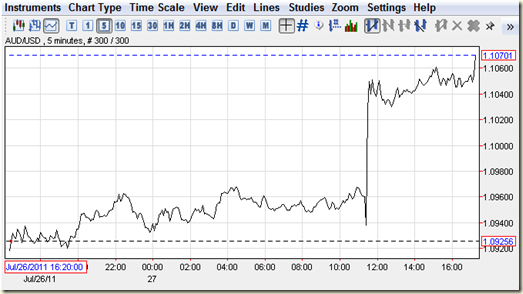 As of now (about 7:15pm) the Aussie Dollar is trading at $1.106. One dollar and ten cents. How insane is that figure? Try this on for size: it means that since the start of 2009 the dollar has appreciated by nearly 60% 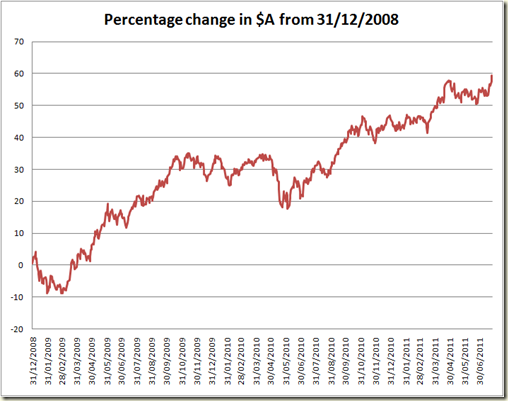 To put that in context, remember that a $30 per tonne price on carbon is equivalent to about a 5 per cent appreciation in the Dollar (yeah that $23 a tonne price is just going to kill our economy…). 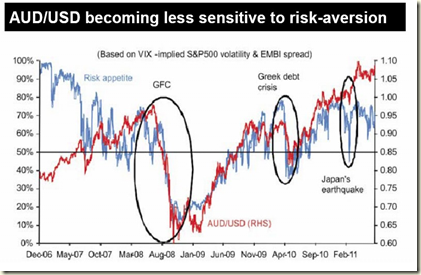 Now why is the dollar so high? Well obviously there is the view that interest rates will go up – interest rates drive exchange rates more than anything else. But the world economy is pretty nicely in flux so you have to take into account other issues, and the biggest other issue in the World economy is the insanity going on over in America where for absolutely no good reason they are arguing about whether or not to increase the “debt ceiling” which if they don’t do could cause America to default on some of its debt.

Interestingly when American sneezes, the Aussie Dollar no longer catches a cold. As Christopher Joye has noted (and so too has the NAB), the Aussie Dollar is still rising even when the appetite for risk in the market goes down. In times past the Aussie was a nice little moderate risk addition to your currency portfolio, now it is (perhaps because we have a shirt load of stuff in the ground that needs digging up) seen as less risky.

So what does it all mean?

Well let’s have a look at the underlying inflation rate – which went up by 0.9% this last quarter and sits at an annual rate of 2.7%: 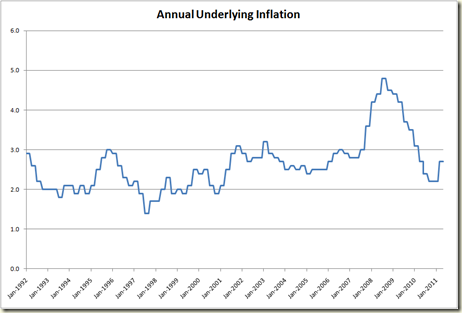 Viewed since 1992 the current position doesn’t look too scary (oh and by the way the graph starts in 1992 because that was when inflation got under the 3.0% mark for the first time since the early 1970s). 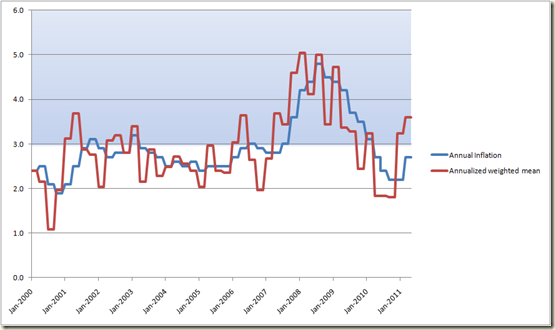 The bit shaded in blue is the above the 3% line which the RBA views as its no-go zone. As you can see it’s done pretty well except for that part from Jan 2007 when Howard and Costello showed that when it came to the budget, restraint was not the biggest word in their vocabulary (neither incidentally was investing in infrastructure, skills, training etc for 11 years… but we’ll leave that to one side).

As you can see the annualized rate is currently above the 3.0% line. In fact, well above at 3.6%. But as you can also see in the past 10 years that has happened a number of times and it has not always precipitated the standard “annual inflation” going into the no-go zone. Interest rate hawks like the annualized measure because it essentially says if the last quarter is repeated in the future look at the horror that will happen. The standard annual rate is more for those who like to sit back and say chill man, look at what has happened – stop jumping up and down and be smooth.

The market while expecting a rise in the future (to whit the Aussie dollar going up), does not as yet expect the Reserve Bank to increase interest rates at next weeks’ meeting.

But the RBA is now less caring about doing what the market expects it do than it was in the past (mostly because the RBA less covertly flags what it is going to do now than it did in the past).

But if we go back to the minutes of the last RBA Board meeting, it ended with this statements:

The extent to which these forces would strain the economy's productive capacity over time would be a key determinant of inflation. Members noted, however, that the flow of recent information suggested both that there was more time to assess the likely strength of inflationary pressures in Australia and that it would be prudent to use that time. Members noted that the CPI outcome for the June quarter, to be published later in the month, would be important in helping to shape views about inflation, and therefore the future path of interest rates. Accordingly, members considered that the current mildly restrictive setting of monetary policy remained appropriate.

The chart below shows also that as a general rule, when the annualized inflation goes over 3.0% the RBA bumps up the cash rate. They did it in 2006, consistently through 2007-08, and even in March 2010. 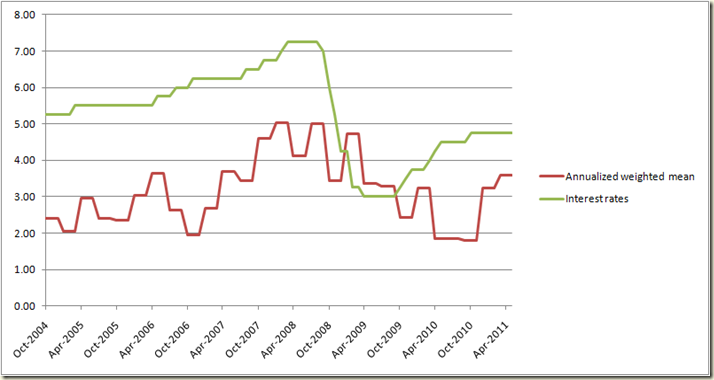 On that measure, I am tending to think the RBA might just increase rates next week. And if they do expect the retailers association to absolutely scream to high hell.

As to the CPI figures themselves, the big headline rise of interest was of course bananas. The supply has not recovered from the cyclone in any meaningful way and so they rose another 138% and in total have increased in price by 470% since the start of the year.

Now here’s the thing about the CPI. Sure that is a massive increase, but how much has it affected your day to day costs? If like me you just stopped buying bananas – or at the very least instead of buying a hand of 7 or 8 each week, you just buy a couple every now and then.

The other big rise was health costs:

The main contributor was hospital and medical services (+3.4%), which rose mainly as a result of the increases in private health fund premiums effective from 1 April 2011.

Ahh private health fund premiums. I do so love to think back to those adverts funded by the Howard Government telling me that basically forcing us to join a private health fund before we turned 30 would help keep the premiums down.. Those umbrellas looked so reassuring.

But the economy, while commonly being referred to as “soft” is not exactly tanking.

The number in employment increased nicely last month suggesting the employment figures are on a bit of an upswing (or at least a flattening, rather than a decline) 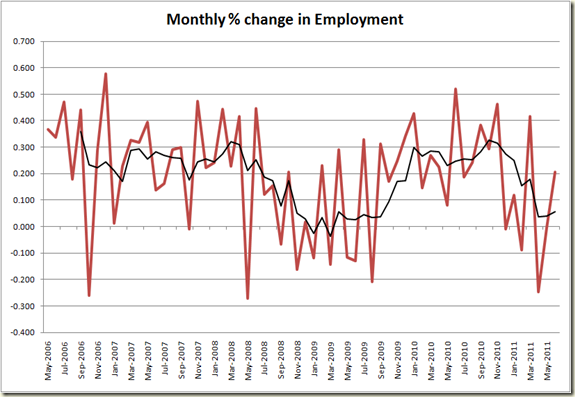 Wayne Swan blamed the rise on the bananas, which is fine as far as it goes, but the underlying inflation measure also went up, so it’s not an excuse you’d like to keep having to go back to.

Incidentally when the last inflation figures came out (this was the week before the Budget) I wrote:

Swan will have to be aware that if his Budget is judged by the commentators as being flabby, it will be easy for any future rate rises to be pinned on him. If his budget is shown to be “a horror” any rate rises will still be pinned on him but at least he’ll have a stronger case to make that the rate rises are due to a strong economy, outside pressures etc etc. (whether he can sell this is another matter).

As we now know the budget was not too flabby, but hardly a “horror”, and yet the national media and the opposition acted like Swan was proposing the universal drowning of kittens, all because families once they started earning over $150,000 might lose out on some benefits that they had when they earned less than $150,000.

If the opposition is going to have some credibility when/if interest rates go up again, they better come to the table with something more than just “savings in the budget”.

But the final point I made back in May – “whether he [Swan] can sell this is another matter” remains rather doubtful.

"And if they do expect the retailers association to absolutely scream to high hell."

With the strong Aussie dollar retailers will be able to reduce their prices on imported products and increase consumer confidence, right? (Crickets.)

I nearly fell of the couch laughing last night. A late night news update warned mortgage holders there was an increased risk the RBA would have to lift interest rates due to the higher than expected inflation figure, caused mainly by the price of bananas. So that's what it's been reduced to...the banana index
Oh my goodness

...and I know some retailers are doing it tough and the Retailers Association's getting a lot of air time lately, but give me a break. Maybe it's time some of those retailers started looking at their own behaviour, stock and prices

Coles/Wesfarmers results don't sit too well with the tales of gloom and doom being spread by the Retailers Association do they? Good results all round and increased sales across most of their holdings.
Friends in the restaurant industry are also piling money into renovations and poaching staff (not literally!).

I notice that you have not published "the sky is fallin in" chart. Is this merely an oversight on your part, or are you holding off until the Reserve Bank meets in September? If you do propose to publish a Chicken Little Index I hope you note your informants as well.

What's with the plunge in the exchange rate just before it jumped?

Structured products that combine views on inflation and interest rates have gained traction with European investors over the past year.

The dramatic flattening of the US dollar yield curve meant investors racked up millions of dollars mark-to-market losses on last year's must-have investment.

I see from your disclosure that you are no longer a dreaded public servant - I hope the bastards did not force you out.... good luck with the book, but keep blogging - we miss your keen analysis...!

A similar practice has been routine in the field of mortgages, brokers earn higher commissions would have to inflate interest rates.

Inflated interest. So the quarterly inflation data released today. The CPI stood at 3.6%. It was a little above what the market.

It shows a great work done in this post.I like very much.

Structured product investors had a nasty shock at the start of this year. The dramatic flattening of the US dollar yield curve meant investors racked up millions of dollars mark-to-market losses on last year's must-have investment - constant maturity swap (CMS) spread option products.

A similar practice has been routine in the field of mortgages, brokers earn higher commissions would have to inflate interest rates.

Congratulations on having one of the most sophisticated blogs I've come across in some time!

It has great detail information that are easy to understand and it also has great tips.

this means is that people want to hold ties with a bad real rate rather than use their resources to get other areas.

This is an excellent record of dofollow weblogs and I just desired to say thank you for trying to put it together and offering it!