The headline figure saw a drop in the unemployment rate in seasonally adjusted terms from 5.2% to 5.1%. The trend rate stayed steady at 5.2% 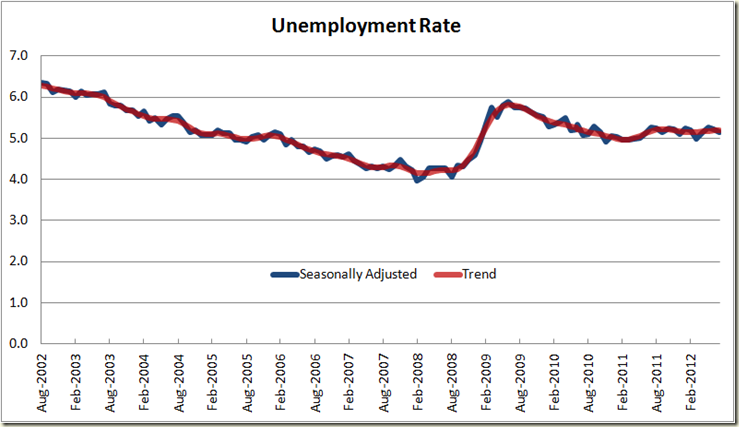 So it’s all pretty flat – but the unemployment rate fall is good, right? Well… hmmm let’s have a look at actual employment growth: 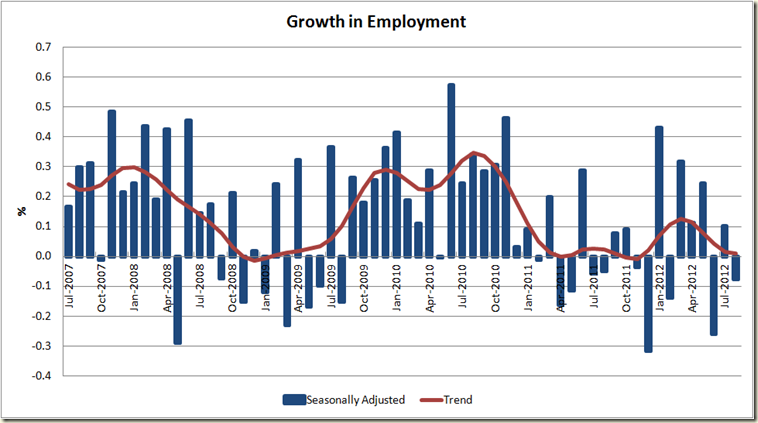 Last month saw a fall in the number of employed of 8,800 jobs. Nine of the past 18 months have seen declines in the number of jobs (though in that period 50 thousand jobs have been added all up).

The full-time employment growth has also been flat of late – in fact there’s been a decline in the past 18 months. 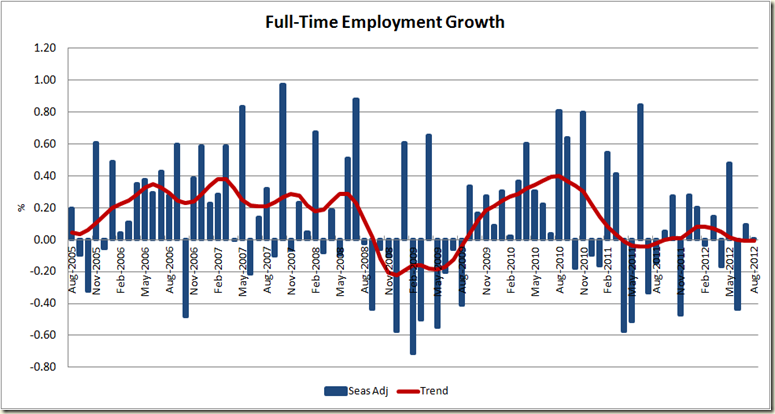 So why did the unemployment rate go down? Because the participation rate fell: 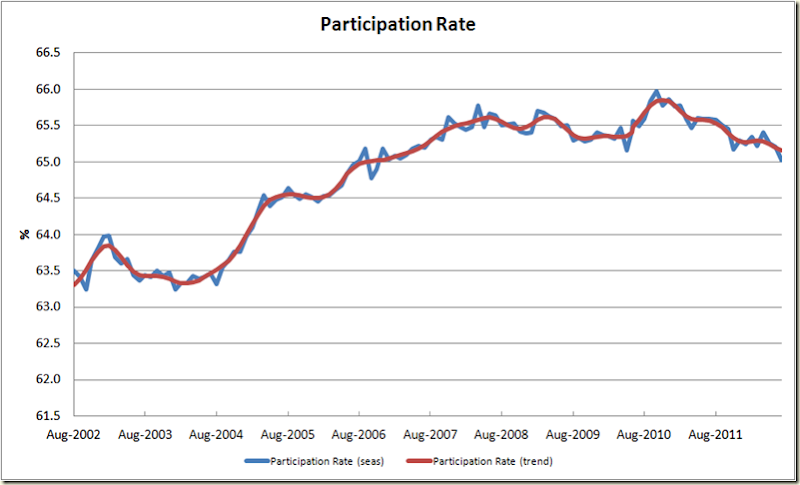 Again the growth in hours worked shows how weak is the labour market: 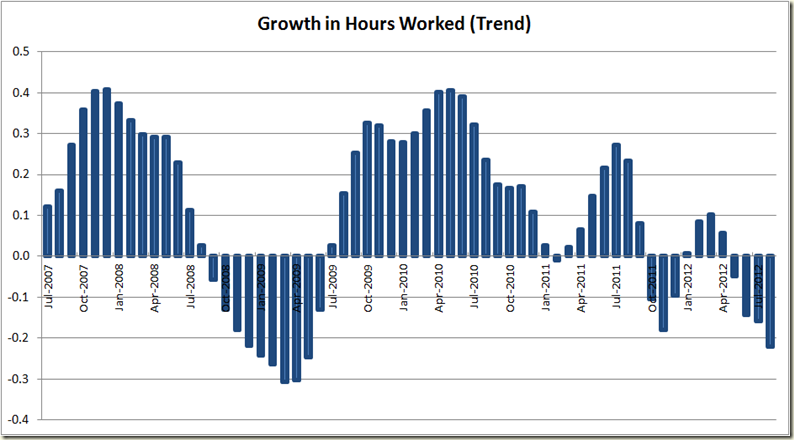 My favourite metric, the Employment to Population Ratio tells much the same story: 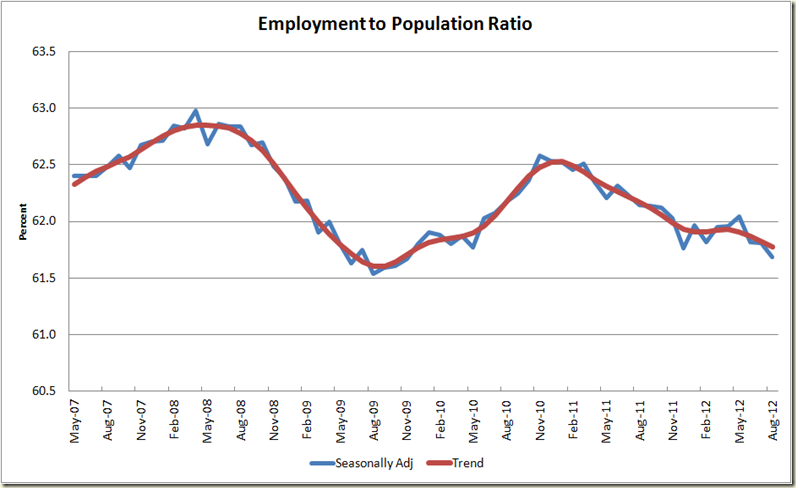 The employment to participation ratio I think reached its peak back in early 2008. I can’t actually see it getting back to that level – purely because the aging population will mean less of the population are at the working age.

The long-term view show where we’re at: 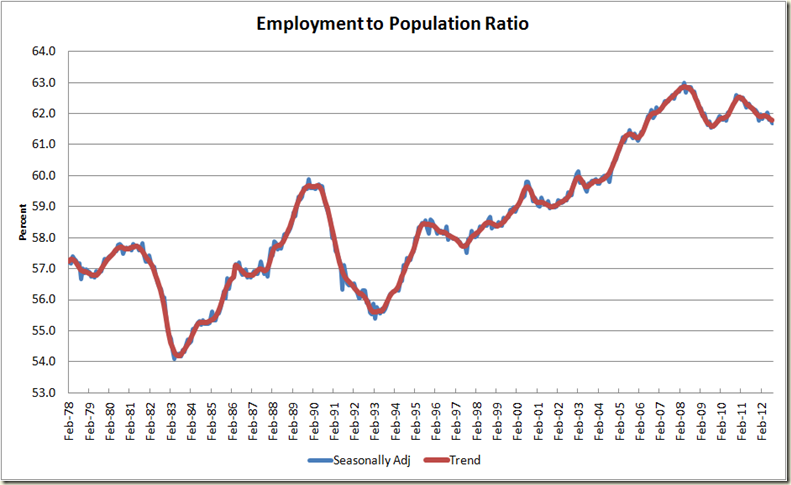 Now to the states. The seasonally adjusted rates really jump around a lot with the states, so I actually like the trend figures here: 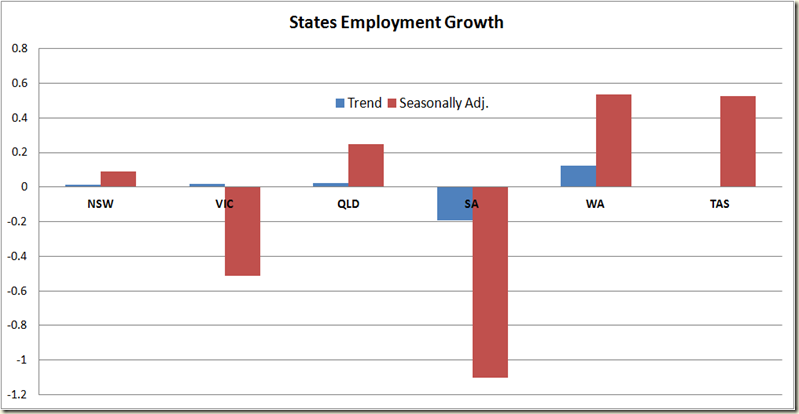 No joy in SA or Victoria, but very flat trend wise over the entire country.

Now I agree with Christopher Joye that there are a hell of a lot of doomsayers out there. And the constant stream of negativity is not good for our economy. It is good that the unemployment rate has fallen to 5.1%. There is a lot wrong with only looking at the unemployment rate, but it is a long held measure that is good to focus on. But I don’t think you can say the labour market is growing above trend. I think it is pretty flat, and that the GDP growth has mostly been a jobless growth.

This may change in the short term, but for now there is a disconnect.

Just a footnote: It's important to remember that this data is from statistical samples and hence each has a standard error associated with it. Headlines like "shock fall" just go to show how incredibly ignorant people are about this. There is no shock in movements within the standard error.

The time series you've posted are more useful. One can see the sampling error (i.e. jumping around) in the seasonally adjusted figure and the smaller samples for each state giving more "jumping" is consistent with this as their standard errors are larger.

With the trend removing much of this variation it does give a fair idea of the population mean. But by their very nature, they are lagged.

The question for policy is what does the future hold. It seems from the determinants of the unemployment number you have shown, it's more likely up than down. Unless the participation rate keeps falling. Perhaps public service job cuts are a factor in this and will eventually stop resulting in the end of the declining participation rate.

Good point Austin. Last month I noted the revision that had occurred - especially with the trend figure. But it's worth remembering that the unemployment rate change this month is actually the ABS being 95% confident than the rate was within the range of a drop of 0.3 to a rise of 0.1

Given your quote about working age, is there anyway to look at participation for age groups?

There is Oliver, but not in today's figures as such. I might investigate it - there is certainly a breakdown of 15-19yos and 15-24yos - and the participation rate for that age group is at the lowest level since 1978 (which is when the ABS data goes back to).