Unemployment Rate in November falls to 5.2%

Well that was unexpected!

Today the ABS released the Labour Force data which showed that in seasonally adjusted terms the unemployment rate fell from 5.4% to 5.2%. The fall is quoted as being a 0.1 percentage point fall, due to rounding. The October figure was 5.3636679% and the November one is 5.2312088% so the fall was 0.1324591 percentage points. (but ignore all that – at that level of decimal points the confidence levels gets pretty poor – which is why the ABS rounds to only 1 decimal point) 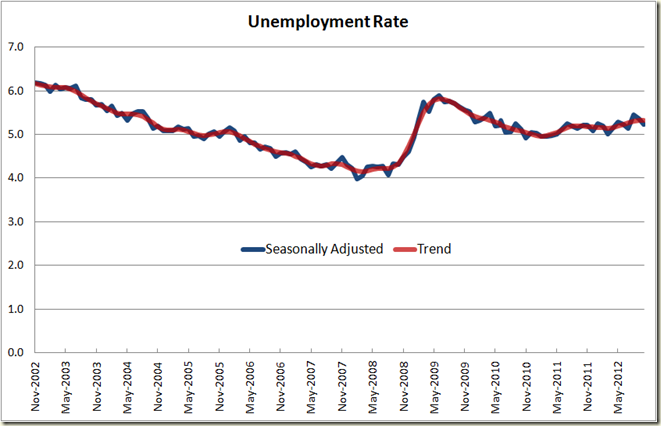 The close-up of the past year shows that we’re pretty much back where we were 12 months ago: 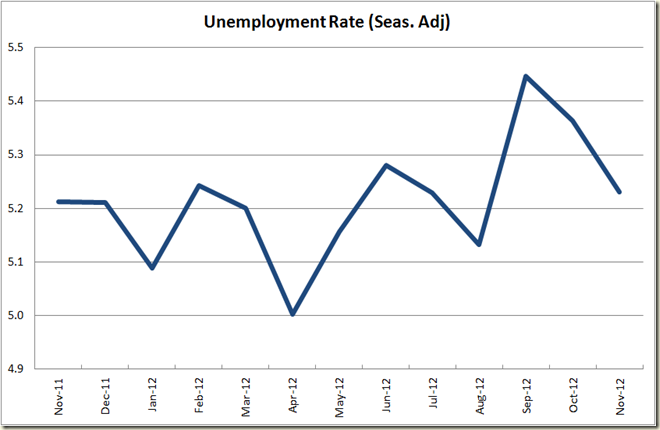 Now this is good news, but let’s go deeper and look at the employment growth. First the monthly growth: 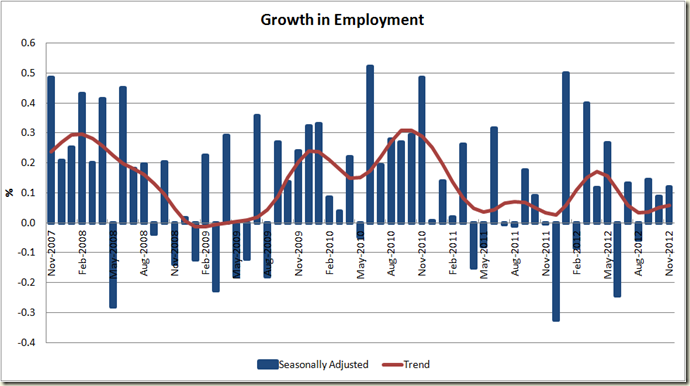 It ain’t spectacular, and is really struggling to get over 0.1%. A display of how flat the labour market is right now is best shown by a look at annual employment growth over the past 10 years: 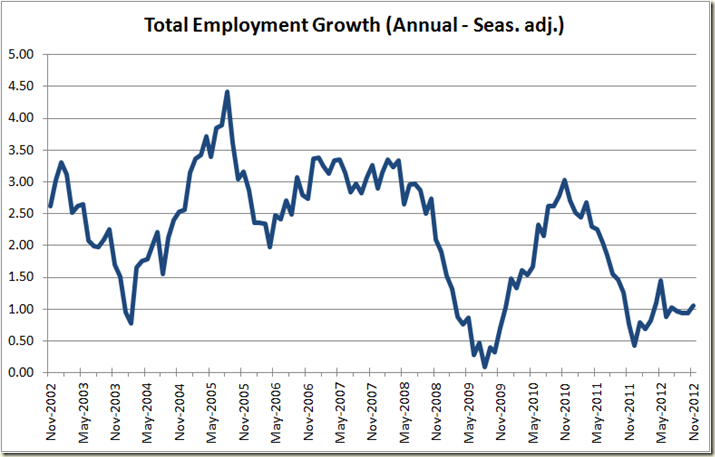 We really should be wanting growth around the 2-3% mark. There is a lot of spare capacity at the moment. Looking at the 5 year rolling growth figures also shows where we’re at with respect to Tony Abbott’s desire for a million jobs in 5 years (which needs around 8.7% growth over 5 years): 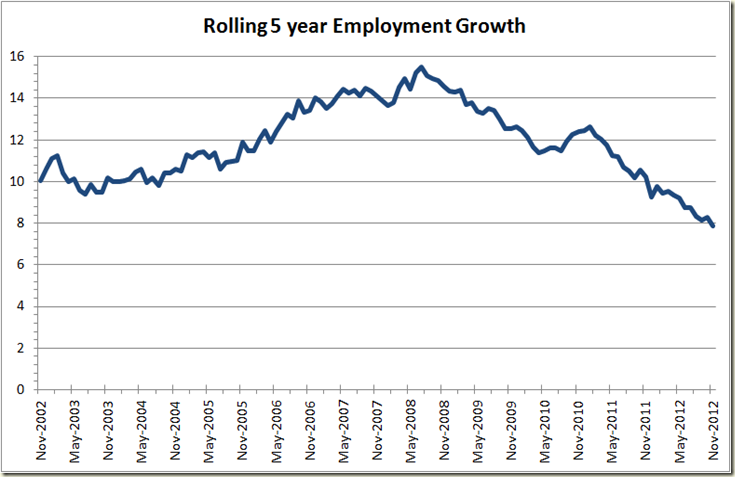 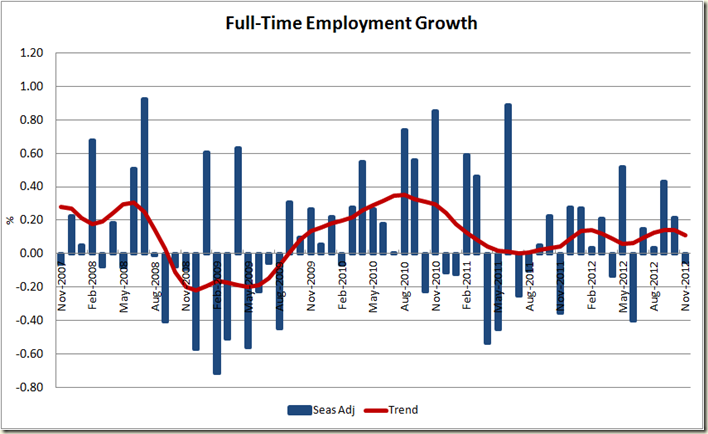 Despite this, the unemployment rate of those looking for full-time work fell: 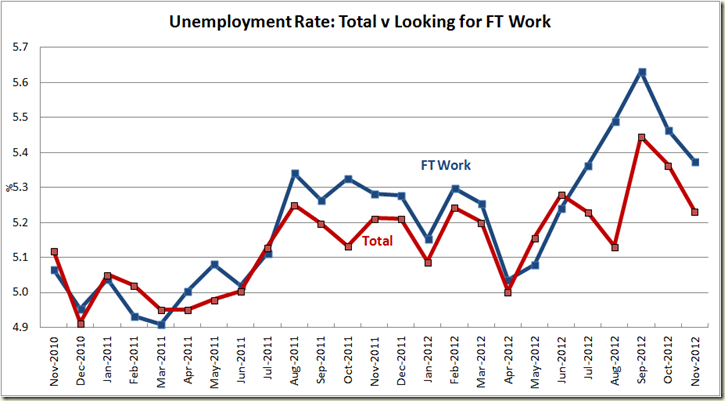 Perhaps due off the back of a 0.1 percentage point fall in the participation rate: 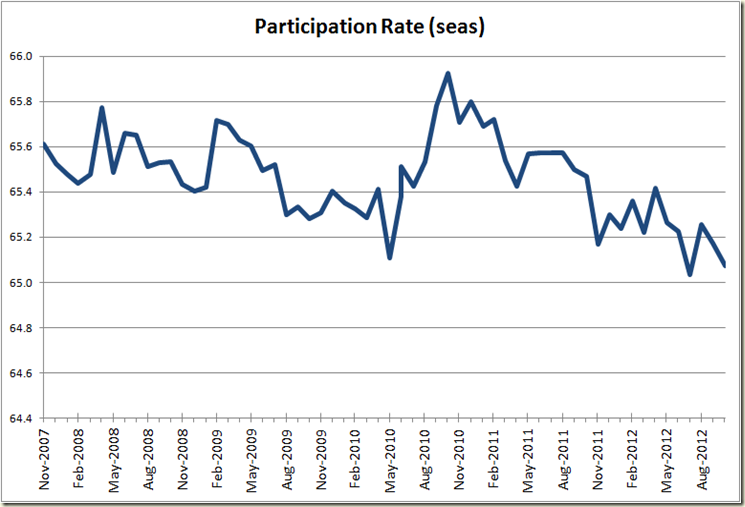 Given the mish-mash of full-time jobs declining and part-time jobs increasing, I like to look at the growth of total hours worked. Rather nicely it shows that in November there was an increase in hours worked (in both seasonal and trend terms): 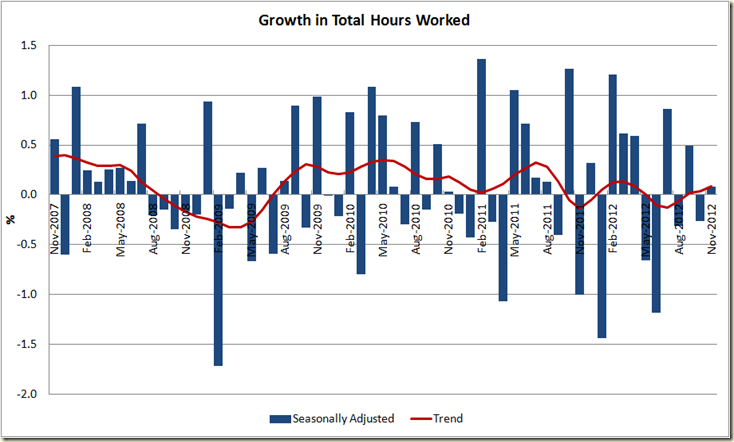 For the long term picture I think the trend rate shows it best. Yes it went up, but boy, it ain’t looking great: 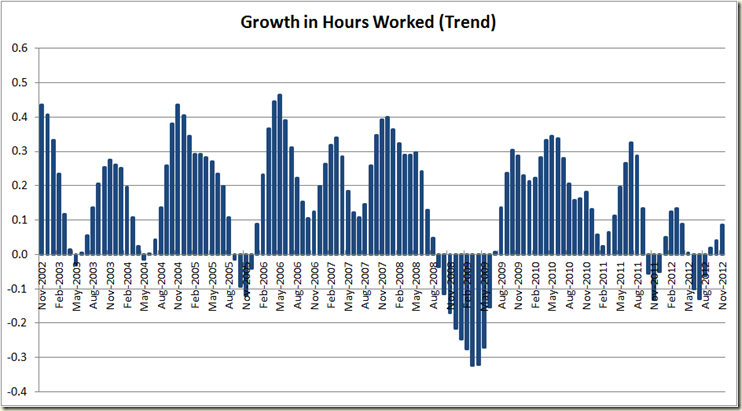 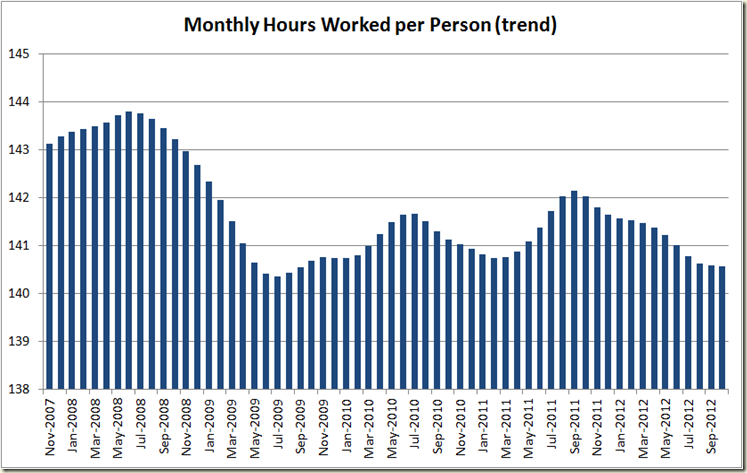 Not surprisingly the increase in part-time work and the decrease in full-time led to a decline males in employment and an increase in women working. 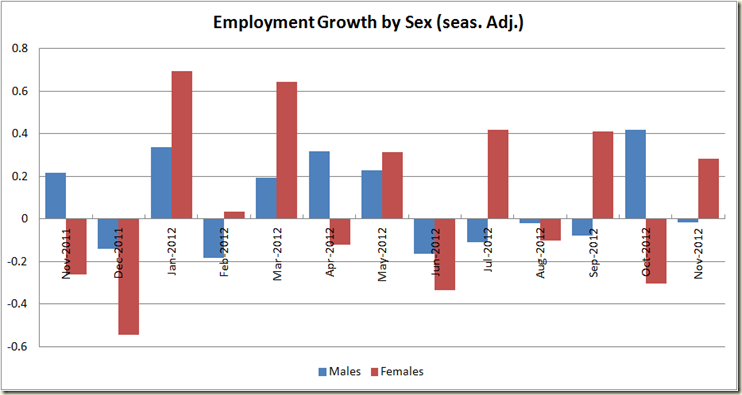 The seasonally adjusted chart is pretty much illegible when you try and look long term, so here’s the trend growth over the past 5 years – it’s worth showing for noting that the GFC was really a male unemployment problem: 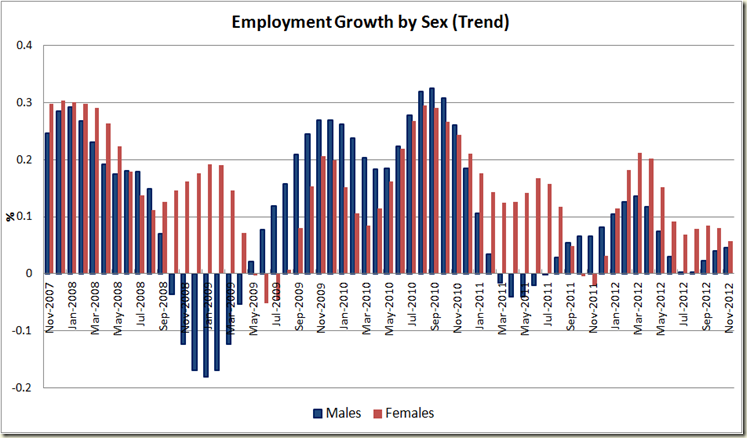 Now to every wonk’s favourite statistic – the employment to population ratio. It stayed flat at 61.7% with a drop of 0.1% in trend terms: 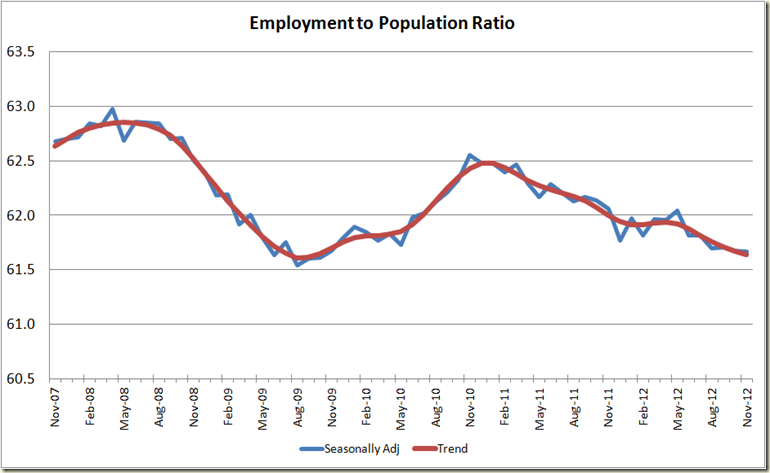 And to compare it with how we’re going with respect to other recessions: Ewww,. Don;t you hate that ageing population… 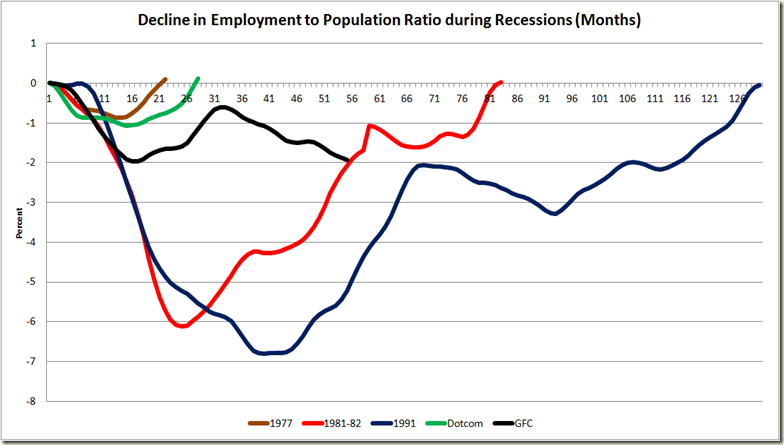 Now to the states:

Queensland has after a stretch of going backwards again enjoyed a month of employment growth – it had a big boost in seasonally adjusted terms, though on a state level they can fly up and down a bit so let’s keep to the trend levels: 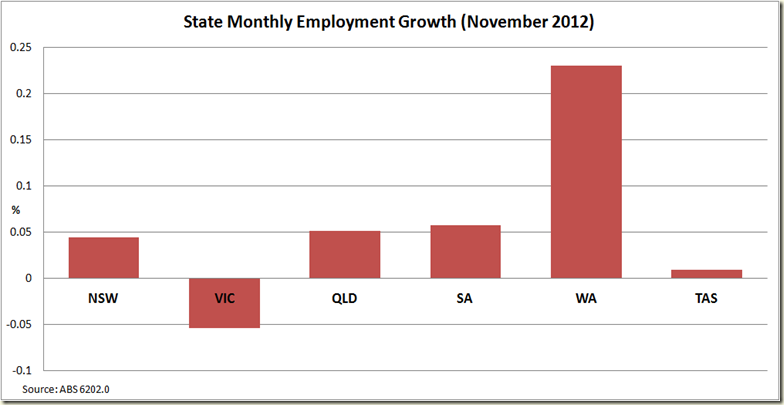 WA once again shows the way. And when we turn to the annual growth, it again leads by a mile: 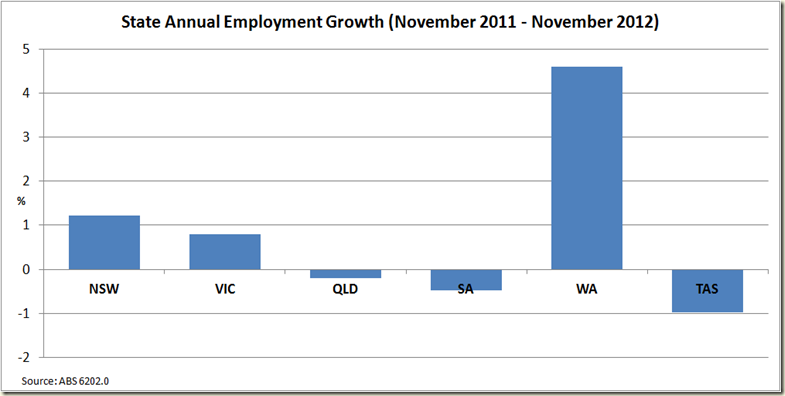 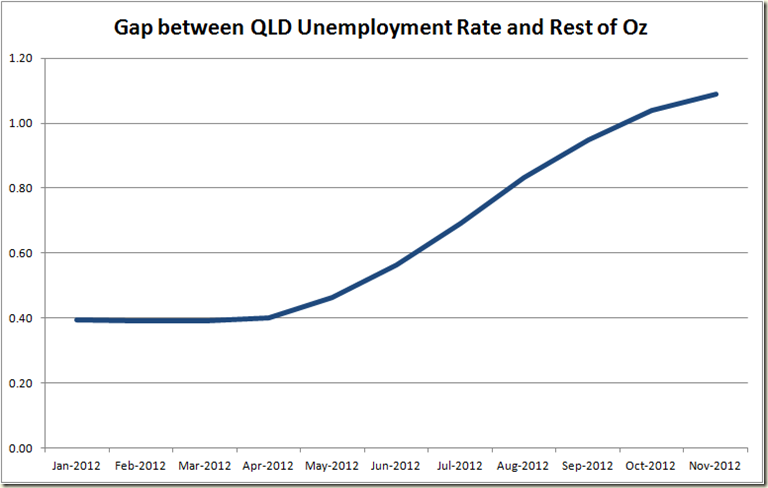 As the unemployment rate of QLD v All Places in Australia not run by Campbell Newmann looks like this (last time I did the seasonally adjusted version. This time I’m using trend): 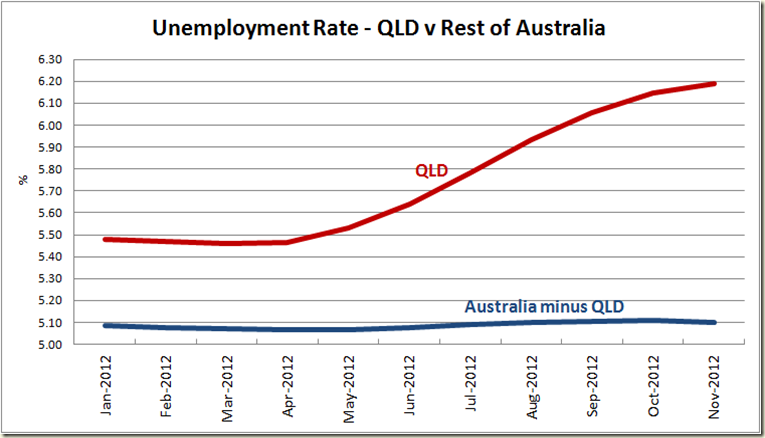 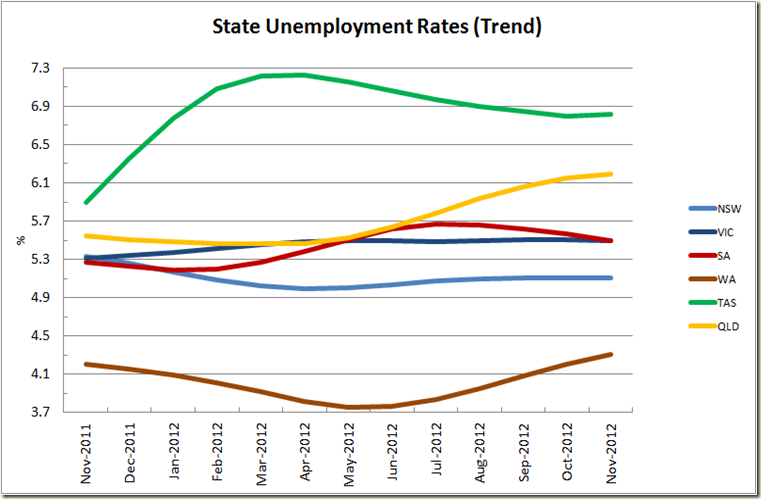 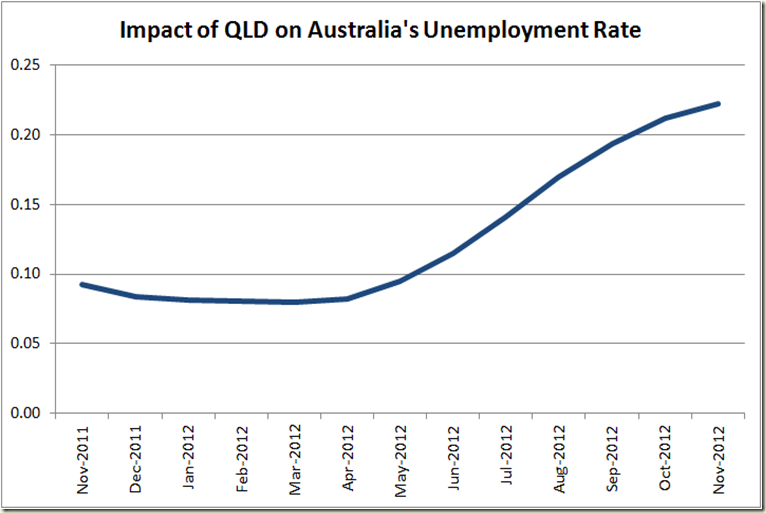 I'm not sure how trustworthy the ABS is. The Roy Morgan stats look a lot bleaker and they actually take into account the amount of under-employed people there are.
I know of one government organisation at the moment who is hiring more people but cutting everyone's working hours down. Sure, more people may become employed but more people are getting less money and are having to look for more work!