Federer releases his solo album, “Sunday Too Far Away”

And then I woke to news that Federer had lost.

And yet I’m not as sad as I thought I would be. And I thought I would be plenty sad. I am a Federer fan in the same way that I am a fan of the Adelaide Crows. As in, I don’t just admire his tennis, for me he is as important as my footy team. And that is pretty damn important. I mean determining whether or not it’s a good week or not important. It’s a support where the pain of his losing almost cancels out the joy of his winning.

And for the last couple years – since he lost in the quarter final at Wimbledon in 2011, I have been edgy as all heck during the first week of Grand Slam tournaments.

Edgy because I wanted his streak of consecutive Quarter Finals at Grand Slams to continue.

And last night it ended at 36.

Thirty six consecutive times he has reached the final 8.

How long is that time? Put it this way, the only person with any chance at all of breaking it is Novak Djokovic. All he has to do is keep his current streak going until Wimbledon 2018.

And remember as well, Federer’s streak was 36 in a row without missing one tournament either due to injury or because he wanted to skip the French Open because it’s not his best surface or he couldn’t be bothered flying to Australia.

He turned up each time, and each time he was there after the middle Sunday. Always in the second week.

In the great Australian film Sunday Too Far Away, Jack Thompson’s character, the gun shearer, Foley, is asked if he rung a shed a few years back (ie was the fastest shearer in the shed). Foley replies, “If I was there, I rung it”.

Of course this marks the end of an era, but it is an era that really ended a while ago.

I have long liked to compare tennis players in this era to rock bands, and for me Federer is The Beatles. There is the before and after. And you can’t deny it, regardless of whether you like him or not.

When he lost in the QF at Wimbledon in 2011 I suggested he had released “Let it Be”, and thought, “Tennis fans, and especially Federer loyalists, will hope that there is time for an “Abbey Road” – that one last Grand Slam where the stars align and for 7 matches he comes back. It is more likely to happen than not.”

And it did last year when he won Wimbledon, and indeed it was “Abbey Road”. A glorious final flourish.

But after that tournament, after the Olympics and after he broke Sampras’s record for number of weeks at Number 1, I think it was pretty clear he was packing up the band.

When he announced that he was cutting back his schedule and focussing on the Grand Slam that was really the end. The reason he won Wimbledon last year, and the reason he regained the number 1 spot is he was prepared to play the circuit week in week out, to commit all the way.

As soon as Sampras went from caring about being number one to just focussing on grand slam, it was over. He won a last tournament, but it was never going to be more than that. The same with Federer. Once the focus goes from the week in week out, the mind drifts just enough that the ability to win at the top level is no longer there.

And so last night we saw what happens after the band splits up. Out comes the disappointing solo album. In this case it is more “McCartney” than “John Lennon/Plastic Ono Band”, but in either case it was a long way from the magic that once was.

Will Federer release an “Imagine”? Who knows. He still seems to love playing, and he can still at times sing on a tennis court in a way that reminds you that this guy was once better than anyone else ever has been.

But while there might be flashes of brilliance and the odd good single, the great album is tough to produce. And to win a grand slam you need an album of good songs, not one or two singles that might be enough to make the charts.

So today I am sad that it is over, but in some ways it is a relief. This Federer fan has for too long been worried about a record of Federer getting to the last 8 – so long that the record had become in my mind to be the goal.  And that’s not how it should be. Federer’s greatness was not in just getting to the final 8 of a tournament, it was in winning the whole damn thing.

And his 17 grand slam titles will take a heck of a lot of beating: 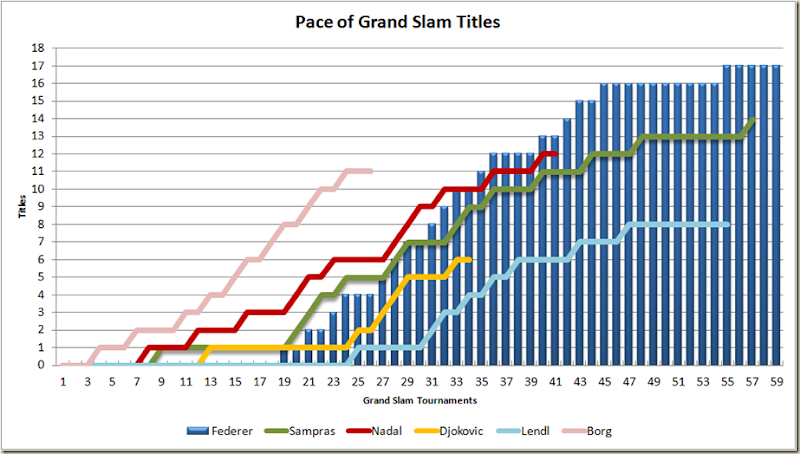 Again, Djokovic is the only current player who has a hope of getting even close (Nadal’s knees will prevent him). But he is currently on 6. So he only needs to win another 11. It’s possible, but let’s wait till he gets over 10 before really contemplating it.

It would require him to pretty much keep up the pace of titles won over the past two year for another 4 years or so. Doable but tough. 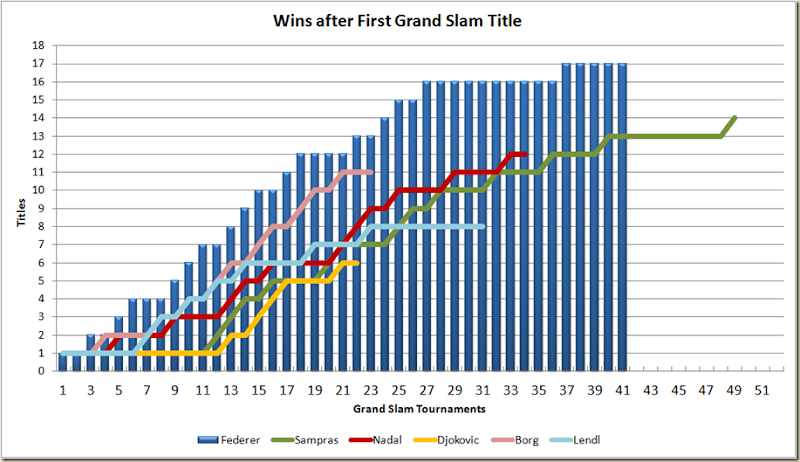 And so the era ends. There will still be a few reunion tours, but we all know it’s not the same thing.

Thankfully I still have last year’s Wimbledon final recorded on our DVDR, and so like getting out an old album and listening to great music I can still get to watch and remember the times when if Federer was there, he rung it.

Your metaphorical point is well-made as always, but Let It Be (1970) was released AFTER Abbey Road (1969). So it would make more sense to talk about Federer recording his albums rather than releasing them.

Yours, a Beatles nerd.

Tell that to Serena Williams!