Today was PEFO day. That moment when everyone turns to the Treasury to find out what the budget situation is as we head to the election.

The only clowns who were saying the Economic Statement would be greatly different from the PEFO were Liberal Party fantasy dwellers and assorted kool-aid sippers. It is not in Treasury’s and Finance’s interest to get budget forecasts wrong on purpose to please the political party in power – which is essentially what Joe Hockey was charging they were doing.

At some point Joe Hockey should apologise for treating Treasury with more contempt than any politician since Jim Cairns. But I wouldn’t hold my breath. If he becomes Treasurer I can just imagine morale at the Dept of Treasury will be sky-high knowing that they have a bloke who for 3 years has accused them of being incompetent now as their boss.

But not to worry, he’ll probably call in Peter Costello to do an audit, like Campbell Newman did, so that they can get the numbers they want to get.

The interesting thing about the PEFO is that it acknowledged the difficulty of achieving the 2016-17 unemployment rates set in the Economic Statement. This was something I wrote about in my Drum piece last week.

The reason it is difficult is it would involve going in one year from 6.25% unemployment to 5%. And to do that you would really need GDP growth of around 6%. Treasury however – because in the 2 “out years” (ie the last two years of the 4 year forward estimates) uses the long term averages for growth and unemployment – had GDP growth in that year only at 3%.

In the PEFO it acknowledges this and points out it could have used alternative assumptions to achieve a different scenario:

But while that might be a nice number of the LNP to focus on, it is worth noting that this alternate scenario actually has a higher level of GDP growth projected and thus ends up with a better budget bottom line in 2016-17. Treasury estimates in 2016-17 the alternative scenario would add a cost of about $1.7 billion in unemployment benefits, but because it predicts stronger GDP and employment growth there would be an extra revenue take of around $2.1 billion. 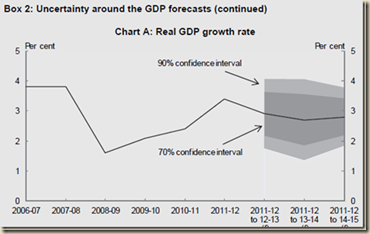 The other interesting thing (in an economic-nerdy way) is that the Treasury has followed the RBA’s lead and published confidence intervals for its forecasts:

This gives you an idea of the inexact science of economic forecasting.

I actually think it is good to acknowledge this.

While in the past the risks with the forecasts have been noted, showing it helps ram home to people (ok, mostly journalists) that getting the GDP growth “wrong” by 0.5% is not an unlikely scenario.

The PEFO also provided an updated assessment of the structural position of the Budget.

This measure in effect forecasts where the Budget would be if economic circumstances were “normal”  ie when we’re not being able to count on record terms of trade figures. 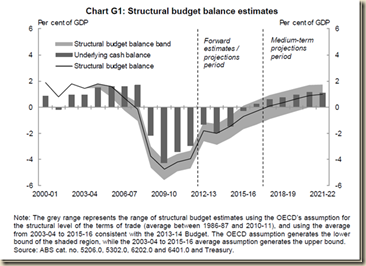 It displays in a nice graph that the budget is expected to be in deficit until 2016-17, but that in structural terms it will take until 2017-18 for things to be in surplus – although the band shows that if the “worst case” scenarios occur it could be till 2012-22.

Note that even if this occurs, the actual budget might be in surplus already, but we could be in that position due to above average terms of trade and not due to a correction of the structural balance.

OK. That is all pretty dull and dry. In effect it lets you know that so far as the “Budget emergency” goes we’re actually repairing it pretty well.

That is only if annual spending growth remains at 2% – the Govt’s professed target.

So keeping spending to 2% is going to be tough.

Laura Tingle also notes in her AFR article on the projections, they are dependent on a number of spending and tax commitments that have not all been agreed to by the LNP and that also if the asylum seekers policies don’t actually work, the added cost to the budget could be around $3.5b over the next four years.

The politics of PEFO is that now that the numbers are out, everyone wants to see everyone’s costings.

Joe Hockey and Andrew Robb made a big deal of the fact that when you go to the “Election Costings’ website, the ALPs page is empty.

If they had looked at PEFO they would have seen Table B2, which includes the costings of decisionS taken between the Economic Statement being announced and the PEFO:

The problem with the ALP is not that they haven’t announced any costings, it’s that they haven’t really announced any new policies not covered by the budget or the Economic Statement. It’s all been pretty light, and remember in the Economic Statement there was around $500m worth of policies over the next 4 years that came under the category of “Decisions taken but not yet announced”.

That said, both sides would be better off now actually releasing some policies and costings rather than saying “look at the other side”. How about not arguing that you are just as bad as the other mob, and show us that you are better?

Bold concept I know, but worth trying.

The morning started off with WA Liberal MP Don Randall saying the Libs might dump promises after the election if the budget is bad:

“Governments after elections quite often find themselves in difficult circumstances and I suspect that should we be the government and we see the state of the books, there's going to be a bit of that sort of talk from the coalition because governments do do that.”

Someone clearly forgot to tell Randall you only start making those statements after you win. When Tony Abbott was asked about this today he slapped down Randall:

“Look, I have been trying to call Mr Randall, but there is no mobile phone reception up here. Until we win government and put our mobile phone black spot programme into place, it will be difficult to call people from places like this.  But he knows what he said was wrong. I will keep my commitments. We will do exactly what we say we will do.”

But then the GFC hit and well, there are things more important than keeping election promises, and that’s keeping as many people working as you can.

The problem is Randall is referring to the commission of audit that an Abbott Govt would institute. It is very similar to the one instituted by the Newman Govt in QLD which was done by Peter Costello (independent man that he is). When asked if Abbott would use the post election audit as an excuse to dump promises or do things not promised he responded:

… if the commission of audit identifies ways of getting better value for the taxpayers' dollars, of course we will be happy to consider that. We won’t do anything that is contrary to our mandate.

Given Abbott was the bloke who denied the ALP in 2009 had a mandate to introduce an ETS despite both the ALP and Liberal Party campaigning on the issue at the 2007 election, for him to start talking about not doing things contrary to his mandate is rather laughable.

The Randall comments also bled into the GST discussion. Last night Chris Pyne, fool that he is, on QANDA went further than the standard line regarding the GST (that they won’t introduce one without seeking a mandate from the electorate) saying:

CHRISTOPHER PYNE: The GST is one of our taxes. If the review says the GST should be increased, the commitment from the Tony Abbott Opposition is that we will not change either the GST or the basket of goods and services upon which it applies. That is a commitment.

CHRISTOPHER PYNE: There will be no change to the GST in an Abbott Government. 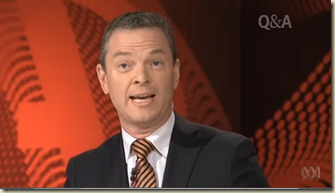 Tony Jones rather correctly then asked him why the GST is being included in the review. The same was asked of Tony Abbott today.

But why pay someone to review something that you are not going to change? You can obviously set parameters on a review – ie review these things, but not other things. Or you can (as the Govt did with the Gonski Review) put the parameter that any recommendation must not make any school worse off. Now those parameters might limit the effectiveness of the review, but at least doesn't negate it.

But to commission a review and say you will ignore any findings it makes about the GST renders the enterprise rather academic.

And here’s the other thing, any changes to the GST will have huge impacts on any other changes in the tax system. Indeed changing it would be the starting point for most of the recommendations – ie increase/broaden it so we can cut income tax, get rid state taxes etc etc.

I’ll write more on this in my next Guardian post, but that political parties feel the need to rule out things they might only do after a review and even then only after the next election is just idiotic, and is one of the worst things about our current political system.

Yes the Government could change the Tax Act to change the GST without the states help, but it should be enough for Abbott to rule out doing anything before the next election. Promising not to do something in perpetuity is stupid.

Oh yeah, and Tony Abbott when asked to compare the current LNP candidate for Lindsay, Fiona Scott, with former Lindsay rep,  Jackie Kelly (she of the “Chaser style prank” Lindsay pamphlet scandal of 2007), he said:

"They're young, feisty, I think I can probably say have a bit of sex appeal and they're just very connected with the local area,"

Apparently Labor are not going to buy into the issue, wary of suggesting that they are invoking a sexism war. Wonderful. So Abbot gets away with saying stuff no boss would dare say of someone who works for them, and Labor give him a pass.

Geez, thanks goodness Julia Gillard got rolled so we could all stop worrying about sexism in Australian politics.

So don’t discuss the GST, and don’t call out sexism. Welcome to Election 2013.

But oh look, let’s not get too depressed. Just think it all could be worse, you could be the journalists who wrote this story:

But geez, you wouldn’t wish being that vacuous on anyone.

Today Tony Abbott was in Penrith. He “pledge $12 million towards a new Western Sydney community and sports centre.” He noted that the project would boost economic activity and confidence in the area.

As Kimberely Ramplin noted on Twitter, here was Anthony Albanese back in July:

“The Federal Labor Government today announced it would contribute $12 million towards the development of the Western Sydney Community and Sports Centre in Penrith.”

Hi Greg
I'm weeping. It's hard to believe that in an age of communications that so many people remain so ill-informed and public figures continue to be allowed to lie.
Doug, Canberra

I am not sure what worries me more, the thought of Hockey in charge of Treasury or Abbott in charge of anything, including his mouth. The comment about the new Jackie Kelly was sexist but what worried me almost as much was that it was the best he could come up with. He was going to campaign with her, he knew the previous Liberal incumbent and the nature of her departure from the scene and the best he could come up with (apart from its sexist tone) was that. He is not a dumb man but he certainly is picky about when he shows signs of intelligence.