The last period of this election is rather different to 2010. I had a look back at my election posts from the last election and saw that on the final Wednesday there was the people's forum n Brisbane. This time round, Tony Abbott has no desire at this late stage to do anything that might risk his position in front.

Back then the Liberal Party costings were also an issue. They actually released them on the last Wednesday, so even with the Parliamentary Budget Office the Liberal Party has not been able to improve on that low bar.

Back then Peter Martin gave me his thoughts via Twitter:

Costings just one line per item - no assumptions, no reasoning. Treasury and Finance would have provided a touch more.

The more things change I guess…

(As an aside, my Drum piece today discussing this very issue.)

Today started off with a carry over of a pretty dumb story from last night’s Lateline. On it, the Chairman of Fairfax Roger Corbett criticised Kevin Rudd. As the chairman of a major media company and a director of the RBA his opinion carries some weight.

But as he is also a member of the Liberal Party let’s just say his opinion at this time is about as stunning as Paul Keating saying he doesn’t rate Tony Abbott.

And given Corbett was tonight at a Liberal Party fundraiser, let’s not even pretend his interview is just some unbiased, objective statement.

I think Emma Alberici is a great host of Lateline, but his political allegiances should have been made clear right up front.

Last night on Big Brother the leaders all had a video played to the housemates on why they should vote for them.

OK, but when we see what Tony Abbott came up with, we see that once again he had his daughters along as props. We know they are just props because he told everyone what their real value is:

I know of no father who would ever describe his daughters to a national TV audience as “not bad looking” with a dumb grin that makes you use all your will power to keep down your dinner.

His daughters have been used by the campaign as very effective window dressing. Passive and pretty is the image they are required to present – read out some painstakingly work-shopped lines at the party launch and spend the rest of the month walking around smiling and laughing in a way that does not betray they actually have brains – which they obviously do.

I think it is abundantly clear the Liberal Party is desperate to present the image to the voters that an Abbott Government would be the complete opposite of the situation we had with a childless woman as PM.

The traditional order is back! And now that the pesky Gillard is no longer around they can do it and not be accused of using the daughters in a shameless manner.

And the great thing is his daughters can play a prominent role in the campaign but because they are his daughters and not running for office they are off limits and don’t need to be held to account or answer any tough questions.

I would ask if they think their being held up as role models where their looks are treated as a political asset is what they think is appropriate for women in 2013.

I would also say either put your name on a ballot or get off the stage.

Today the latest GDP figures came out. I’ll be covering these a bit in my next Guardian post, but here’s the take away graphs.

Firstly, quarterly growth was 0.6% in seasonally adjusted terms and 0.5% in trend terms. This was slightly slightly above expectations.

The market reacted in their usual calm and non-caffeinated manner: 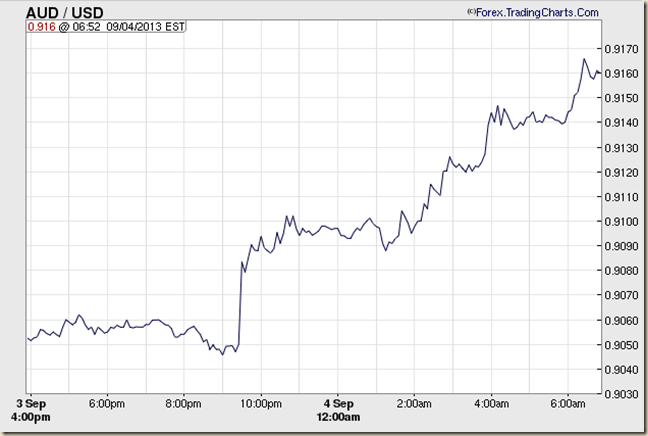 So the dollar rose a cent in the nine hours after the figures came out. Clearly they think slightly above expectations means no more interest rate cuts.

Ok, let’s have a look at some graphs 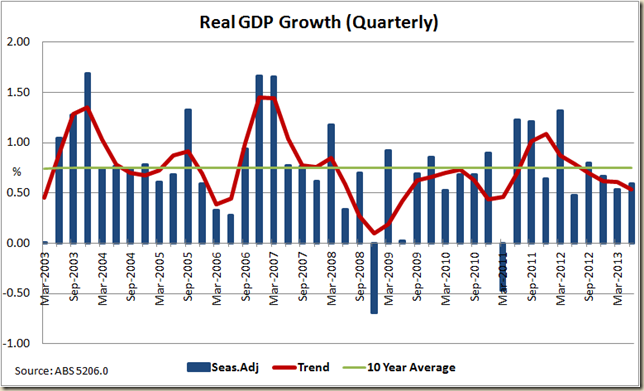 So you can see while growth might have been above expectations it is still below average.

In annual terms the same thing – trend growth of 2.5%, a bit below the average (OK 0.5 percentage points below average): 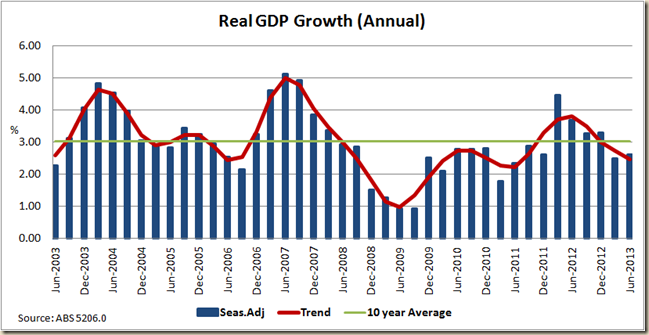 The Nominal GDP figures were also quite interesting – still very low. The GDP deflator (the inflation rate proxy used in the national accounts) is still incredibly low at 0.4%: 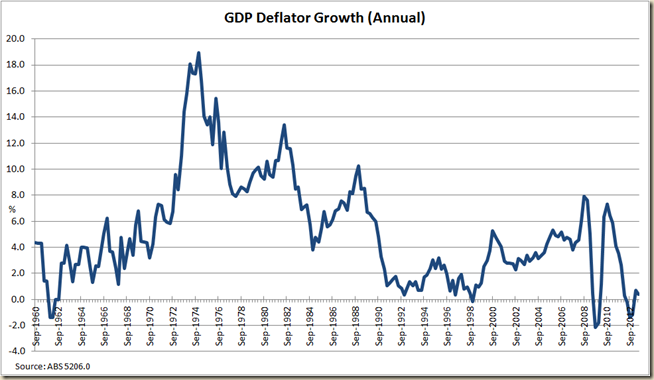 So thus the nominal GDP growth (which is GDP growth in current dollars) is also very low: 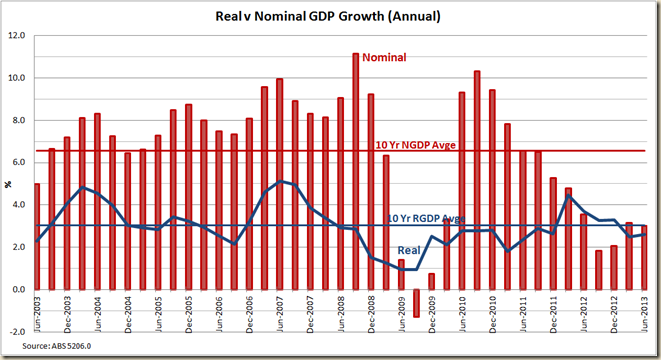 And given NGDP influences the amount of tax revenue you can see things are not exactly going to go boom time.

Here’s a comparison of real and nominal GDP growth from 2002 until the GFC hit, and in the time since then: 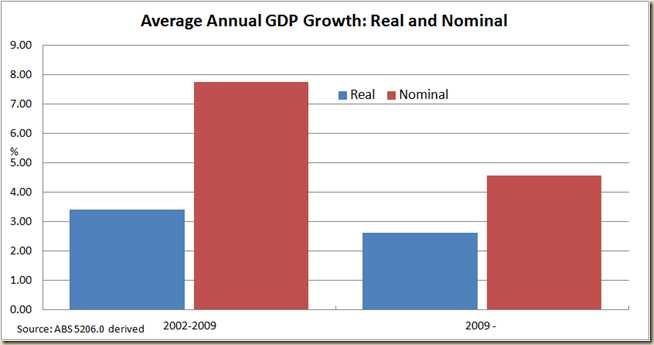 In the PEFO, the Treasury estimated that a fall in the nominal GDP of 1% due to a fall in the terms of trade would likely cause a $3b decrease in tax revenue in the first year and $6b in the next.

For the past 4 years we’ve had average nominal GDP growth around 1.4% below what we would have expected prior to the GFC.

And with that ladies and gentlemen goes much of a chance of having a budget surplus.

I should add, the 2002-2009 growth is not coming back. So get used to this sluggish nominal GDP growth. It’s the new normal, and political parties need to realise it (which I think they have mostly now have).

But let’s also look at productivity, because we all know it is a national crisis. Indeed, the editor of the AFR, Michael Stutchbury, yesterday wrote:

Mr Abbott and his team must build the case for a systemic rethink, not to strip workers’ rights but to promote the sort of workplace culture that will make them and their businesses more productive and prosperous. They will need to do this because reviving the economy’s productivity is the only way Mr Abbott can deliver his promise to improve the lot of working Australians.

Reviving? Geez, it must be falling. Let’s have a look…

Well we had the 10th quarter in a row of positive productivity growth. The best positive run since September 2002 (yes, over a decade ago) 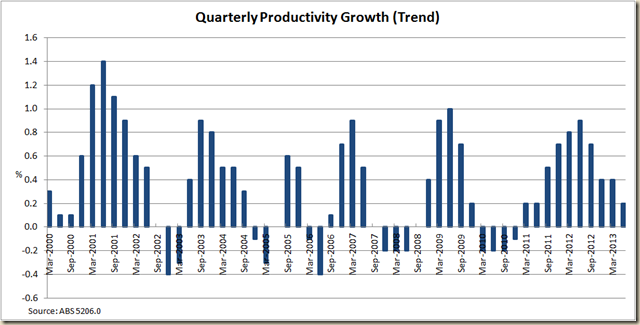 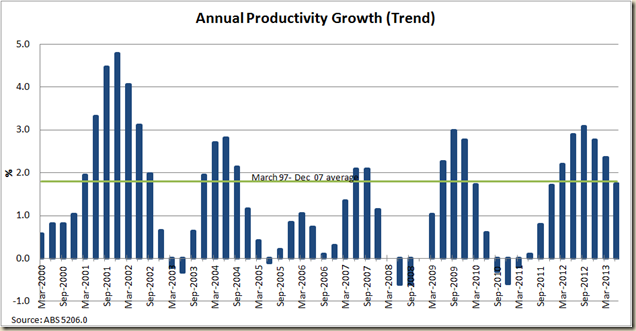 But looking at productivity growth in annual terms is a bit simplistic. There can be blips and bounces. So let’s look at the annual rate, but averaged over five years: 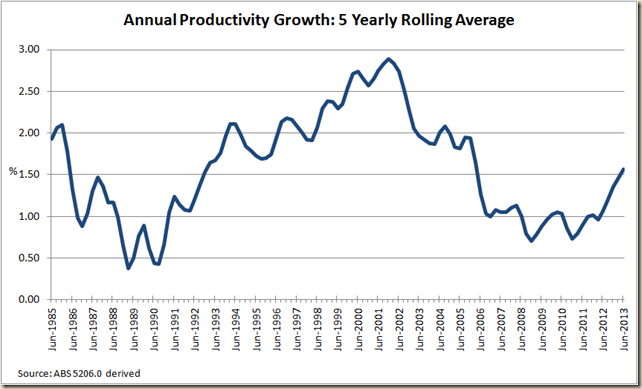 Yes, clearly Mr Abbott needs to revive our productivity. With luck he can take it back to where it was the last time the Libs were in power….

Greg - you are wasting your time talking about facts. Faith always beats facts.
Speaking of faith, would someone somewhere please ask him if he remains committed to funding the Royal Commission into Institutional Abuse of young children?
There's no doubt Pell wants it shut down - will Abbott resist?

I was talking to someone tonight who pointed out that the appointment the GG, Quentin Bryce, expires next year.

Didn't Abbott raise a hullabaloo about Gillard making a premature appointment to stymie Abbott's appointment of Peter Cosgrove? The media was all over it at the time, yet it didn't happen.

Couldn't someone ask Abbott about all his confected outrage about his straw men that never appeared?
DF