This is Exhibit A in the case for why I am not a professional road cyclist: 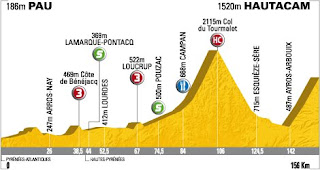 This is what the riders in the Tour de France were faced with yesterday. It’s not often that a picture can convey the excruciating agony of a sporting contest, but this goes close. It looks fake. To someone like me from flat Australia, where the highest mountain is 2,228m (that’s right, only 113m higher than the Col du Tourmalet), such a step rise looks other worldly.

The final climb looks like the draftsman has just got bored and took out a ruler and decided to not even bother pretending that the picture is meant to represent any reality. But once you take in the fact that such climbs do exist, and that the riders in the tour were all expected to climb them (and the leaders expected to race up them), well then it’s just plain scary.

The tour is one of the few great sporting contests. It is one of the even rarer great international sporting contests which happens annually. Because of its length I compare it more to the Olympics as a whole than an event in the Olympics. It is Wimbledon – the one everyone wants to win. It is the US Masters – it’s invitational. It is the Champions League – it goes on forever and is swamped in money.

But it is better than all of them. It has the tradition of Wimbledon and the Masters, but the commentators aren’t obliged to act as though they are broadcasting a religious act (remember there’s no rough at Augusta National, only “second cut”); and the event does not need to be moribund in traditional foolishness – make sure those tennis shirts are white thank you.

While the riders are extremely well paid and as covered in sponsorship as a footballer for Man United, they never take a dive and roll around on the ground in the hope advantage – in fact they are expected to shrug off a crash that would send you or I crying home to Mum, or at the very least flinging our bikes in the shed and swearing never to ride the bloody thing again.

The riders are thin and wiry, yet strong and tough. They hurl themselves up a mountain with muscles screaming in pain, and then scream down the other side at a manner simultaneously utterly insane and completely in control.

When you look at the picture you wonder what it must be like to see the event live, and pity yourself that you must make do with television, which cannot replicate being there. But here again the tour bests other sports; because while undoubtedly to be among the throng of spectators on the side of a mountain road must be thrilling, watching it on television is no poor substitute.

In fact watching the tour on television is a treat. The vistas of the French countryside and the villages through which the riders pass make the viewer yearn to be able to sell up, move and take up a job perhaps working in the local bakery, and going home each day by bicycle to your lovely little 16th century cottage.

Truly, when you see France through the prism of the tour you understand why it has been invaded so many times throughout its history – it is achingly beautiful, and looks for all the world a paradise; no heavy industry, no garish architecture, just mountains, vineyards, rolling hills, brooks with men in waders fishing, and the greenest grass in plentiful supply for cows to leisurely feed upon.

But the tour on television is also great because, unlike other events where the action is missed because the camera can only cover so much – the AFL telecast that renders the viewer blind to the leads and moves by those in the forward line while the ball comes from defence – in the tour the cameras are part of the event.

The motorcycles are there with the riders, focusing on their faces, zipping past those who have been dropped by the peloton, and above all, giving the viewer an accurate picture of the incline the ride must climb. Last night at time the road seemed to disappear behind the riders, and their legs completed revolutions in slow motion – it seemed to me a pace that I would have ridden (were the mountain a slight incline, and I much younger and impossibly more fit) – it looked hard.

Through out the stage, their faces changed from studied blankness to badly acted blankness. They tried not to show pain, they desperately attempted to keep their facial muscles relaxed – look at me they say to the others, it ain’t so bad, anyone care to have a surge, you know just to break the monotony? And then bit by bit up the Hautacam the pain broke through the relaxed jaw, and twisted itself into an expression that fooled no one. They were living pain, and when they finished they all knew more days of pain waited.

Last night Cadel Evans took the lead by one second. His comeback from a bad fall on Day 9 – a fall that so easily could have broken his oft broken collar bone, or dislocated his shoulder – to take control of the leaders group and go up the mountains on his own, surrounded by riders from CSC and Saunier Duval was breathtaking. And it was great because it was so human. He never zoomed ahead as though he were powered by a force made by man in laboratories. All of the riders in fact struggled and inched either ahead or behind. Truly it was riveting.

I needed to go to bed, but Evans kept me awake, on the last climb I dared not leave the couch for fear of missing a surge. Then to watch the clock turn over as we waited to see the leaders’ group come round the final bend to see if he would take the lead was as thrilling as the end of close AFL match.

Evans will likely give up the yellow jersey over the next few days – it does not matter, so long as he wears it down the Champs-Élysées – but he has proved himself, and if he does win it will rank with the greatest of Australian sporting achievements. He won’t be on any breakfast cereal boxes in this country, but he will stand in the pantheon of Australian greats.

The next two weeks will be exhilarating.