With 9 days to go before the start of the Olympics, I thought it apt to do a top 10 list of Olympic moments I wish I had been there for (ok I meant to start the list last night, but the internet censorship story got in the way!)

The Times of London has come up with a top 50 list of greatest Olympic moments. Now I’m not planning on doing a "best of" list. This list is events I wish I had seen, so I won’t list Mark Spitz’s 7 Gold medals in Munich, because (a) I’m not much of a swimming fan – and certainly couldn’t be buggered forking out the money for a ticket to see a sport that is a heck of a lot better to see on TV, and (b) because you couldn’t have seen him win all 7 medals in one day.

Ditto Nadia Comaneci’s perfect 10 in Montreal. I’m not one for gymnastics – and certainly not women’s gymnastics. I don’t like sports that are decided by a subjective vote, and I hate sports where it is an advantage for you to still be a child.

On this day, the great Paavo Nurmi did what no athlete will ever do again – he won the 1500m and then 2 hours later he won the 5,000m. He won both in Olympic Record time, and it wasn’t like he was competing against nobodies - in the 5,000m he beat his Finnish te 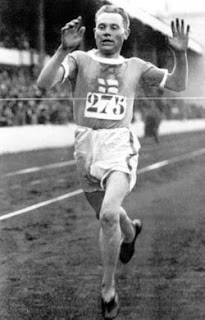 Four years earlier in Antwerp, Nurmi had won Gold in the 10,000m and Silver in the 5,000m (and also Gold in the now defunct Cross-Country and Team Cross-Country). But for Paris he was even more determined, he wanted to win the 1500m, 5,000m, 10,000m and the cross-country. He did win all except the 10,000m – the Finnish officials did not allow him to enter it as they felt he was in too many events.

The legend is that while the 10,000m final was being run, Nurmi in protest (he was a fairly prickly character by all accounts) ran on a training track outside the stadium and broke the world record. Whether this is true or not (and I tend to believe it) a month later he set the 10,000m world record of 30:06.2 that would last for 13 years.

On 10 July he won the 1500m in his usual manner – front running while holding a stopwatch to pace himself – and he won easily by one and half seconds. Two hours later his opponents in the 5,000m assumed he might be feeling a tad weary and so decided to set a frantic pace – in fact they went out so fast that they went through the first 1000m at the same pace as would be set in the 5,000m final at the Munich Games in 1974.

As is to be expected the field faltered and over the last 8 laps only two runners remained – Nurmi and Ritola. Nurmi stayed in the lead looking at his stopwatch. With 500m to go Nurmi unleashed his kick for home. Ritola matched him and with 20 metres to go tried to pass. Nurmi held him off and won by 0.2 sec in 14:31.2.

So great was this feat that no one until Hicham El Guerrouj in 2004 would do the 1500-5,000m double (Bernard Lagat of the USA via Kenya will attempt it in Beijing), and yet Guerrouj did not have to do it on the same day, and in my opinion was gifted the 5,000m due to the pace being so slow that it came down to who could run the last 200m the fastest. Nurmi won a great race and was pushed all the way.

But as great as that day was, even better would to have been in Helsinki a month earlier when Nurmi decided to ready himself for the Games by running the 1500 and 5,000m, 55 minutes apart. He broke the world record in both.