Before I get started I want to address something that has already started, and needs to be nipped in the bud before the Games start. The word “dais” used to denote the thing competitors stand on while receiving a medal is pronounced DAY-ES, with an accent on the “es” so slight that it is almost one syllable. I’ll accept DAY-ISS. But please people, let’s not get into calling it a DIE-ISS.

If all the Channel 7 commentators can follow this rule, I won’t need to shout at the TV screen every time a sentence begins “Look at her standing proudly on the...”
Thank you.
***
Mexico City, Wednesday 16 October 1968. The Men's 200m Medal Ceremony 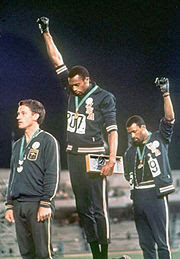 I doubt there is a photo which makes me more proud to be Australian.

Two hours before this photo was taken, Tommie Smith of the United States had won the 200m men’s final in the world record time of 19.83sec (becoming the first man to break 20 sec in the process, and if you watch the film you have to wonder what he would have ran if he hadn’t raised his arms about 15m from the finish); third was his compatriot, John Carlos; and second, by virtue of a great final burst, was Australian, Peter Norman in 20.06 (still the Australian record).

While getting ready for the victory ceremony, Smith and Carlos told Norman they were planning to stage a protest against the treatment of blacks in America. This had followed the formation of the Olympic Project for Human Rights (OPHR) which had advocated a boycott of the Games. They planned to go shoeless and wear black socks to represent black poverty and also to wear black gloves raised in a black power salute.

The problem was Carlos had forgotten his gloves. Norman suggested Smith give one of his gloves to Carlos; he also volunteered to wear an OPHR button.

Symbolism has gotten a bad rap of late – too often it is used as a synonym for lacking in substance. But on that night the symbolism of all three men’s actions was powerful and filled with substance.

While I have admiration for Smith and Carlos, it is Norman’s actions that fill me with pride; for I think his work that night is symbolic of what is good in Australia, and how we should see ourselves in the world, and most importantly, how we should act.

He stands on the dais; unlike Smith and Carlos he does not bow his head; unlike Smith and Carlos he does not raise his fist (it’s not his fight). He stands there, but crucially he is not passive, rather he is supportive and dignified. His wearing of the badge above the coat of arms on his track suit explicitly denotes his agreement with the men behind him, but it isn't in your face. His advice before the ceremony is crucial to the result – the vision of Smith with left arm raised and Carlos with right, provides a balance that makes the two men seem unified. Norman standing in front takes nothing away from the men, but adds everything.

I love that this great moment features an Australian in the 2nd place position. It would’ve been wrong if he had won – the image would’ve seemed too discourteous. Any medal ceremony is all about the winner – 2nd and 3rd are attendants, and so Smith and Carlos are showing no disrespect to Norman. It is the American anthem playing - it is their protest.

And if we are honest, Australia is only a middle power – we're not used to being on the top level. But we are important. We can advise and support just as Norman did that night. And we can hope that our Government will advise and support America with as good a motive as did Norman.

The other important aspect is the year -1968 – a time when both American and Australian Governments were conscripting their citizens to go and fight in a civil war in Vietnam. I love how at a moment when our Government was perpetrating perhaps the most disgraceful act of bastardry in our history by supporting an equally immoral US Government that a young Australian sided with two young Americans in an silent but very public act of courage and morality.

When I see Norman standing there, I wonder if I would have done what he did. It would have been so easy for him to say, “Thanks fellas, you do what you want, but leave me out of it.” It’s not as though it was an easy act –Norman was vilified afterwards by the Australian media, and essentially snubbed by the Australian Olympic Committee (he wasn’t chosen for the Munich Games although he qualified) – he wasn’t even included as an official invitee to the Sydney 2000 Games (the American team instead invited him to attend with them).

But while he would have known his actions would not be popluar with the Australian public at the time, he supported Smith and Carlos before the event and afterwards as well – never faltering in his defence of them. We all should hope that at such times in our lives we'll act as he did.

Symbolism can be a great and powerful thing, but I am wary of athletes doing a similar protest in Beijing – I hope no Australian or American athlete tries to do a Smith and Carlos for Tibet. It’s not their fight. It will cost them nothing. Sure they may get sent home, but hardly in disgrace, in fact they’ll probably be lauded and pick up more sponsorship.

I also think it will do damage to the cause. During the Sydney Games I loved Midnight Oil wearing the “Sorry” T-shirts at the closing ceremony, but if say Maurice Green after winning the 100m had unveiled a “sorry” t-shirt I think I would wanted to kick the arrogant bastard back to America.

If a Chinese athlete does it – great, support, help and advise him; heck, offer asylum if need be – but it’s their country and you have to pick your timing and ask will protesting help Tibet, or will it just make you feel and look good?

The greatness of Norman’s act is also revealed in this picture: it’s Peter Norman’s funeral in 2006. The two front pallbearers are Smith and Carlos. Norman kept close with them both and their presence indicates that neither of them thinks his actions back that Wednesday night in 1968 were “mere” symbolism.

As Carlos said at the time:

"His role was to show everyone that it's not a black thing, it's a human thing. It's not about colour, it's not about, you know, wealth or lack of wealth, it's about having an understanding and love for humanity. You know, it's two black guys, but it was three human beings up there, total."

We should know more about Norman and his act than we do - it is one the defining images of the 20th Century. And Australia was there. Be very proud.
***

On a related note, a documentary on this event “Salute” has been made by Norman’s nephew, Matt Norman and is currently playing in cinemas.
Posted by Greg Jericho at 7:05 PM

I think I have something caught in my eye....stoopid tears