Day Thirteen: Or, I backed my ability and it bit me on the ar-e.

Craig Mottram wasn't concerned about what time was required to be one of the 3 non-automatic qualifiers in the 5000m last night, He should have been. He ended up finishing 5th and missed out by about a second from advancing through to the final. Now he was in a hot heat, but at the Olympics they all are. His reaction after the race however, was a model of truth and self-assessment:

"I felt good believe it or not for 11 laps, it was actually my turn to break out but the Qatari beat me to it and I thought that was OK, I'll just follow him."

"After about 50 or 60 metres of that I couldn't go anymore. I don't know why, it just wasn't good enough. I've got no excuses, every heat was just as hard as the other. If I was concerned about not being in the top four I'd have taken the pace up myself, I backed my ability and it bit me on the ar-e."

"The Olympics is where everyone's at their best and I believed I was. It's not as easy as it looks, you can be comfortable running 66s or 67s which I was, then the injection of pace it stung me. I've got no excuses, I just didn't have it."

It must be incredibly tough for a guy who knows he is good enough, but knows he wasn't good enough when it mattered. He was amazingly honest.

Mottram I think should have a look at going up to the 10k. His speed at the end isn't up to the likes of Bekele and Lagat - who ran away from him over the last lap. Perhaps he should look at Youcef Abdi and think about running the steeplechase: Mottram is tall and would have no problems with the steeples, and the steeplechase is more about running good constant pace than the sitting and kicking of the flat races.

He should be able to stick around till London; but I can't see him ever medaling again at the world level in the 5000m.
***
Jerry Seinfeld once said that most major achievements done throughout history are examples of men doing something stupid to impress women. Mostly it fails.

Billions of dollars are ploughed into the space program in the 1960s, Neil Armstrong steps on the moon; and what does it get us? Lot's of "a man can walk on the moon, but he can't work out how to replace an empty toilet roll".

Women for the most part, see men doing amazing things and curl their lips and think "yeah, good on yer". So it is with Michael Phelps.

Now I have no idea if Phelps was out to impress women, but if it was he failed miserably.
Check out US swimmer Amanda Beard's reaction to being asked if she and Phelps were an item:

"Come on, I have really good taste,"

Ouch; but it gets worse. When asked if she had ever kissed him:

Unless the phrase is followed with "he's my brother", no guy ever wants to hear an "eww no" when a girl is asked what it would be like to kiss him; even if it is followed by "he's such a good friend that he's like a brother to me" the guy would think, yeah but did you have to say "eww no"???!!

I'm betting Phelps is now thinking, geez, guess I'll have to go for 10 gold next time!

This story also reinforces my Phelps won't make a billion dollars in endorsements. White, non-basketball playing swimmers need a reaction better than 'eww, no', if they want to be the face of an company's advertising campaign.
***
Another quote from Sally McLellan about her reaction to coming second when she and bronze medal winner Lopes-Schliep celebrated together:
"She was the first person I saw, I was excited for her as well as myself, I screamed, she screamed, no words came out, but we understood each other, it was just so magic." 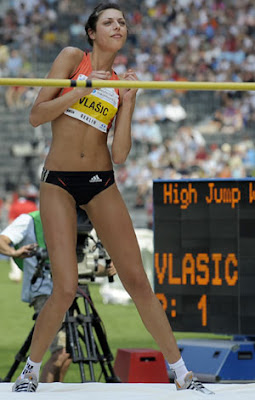 I have been a big fan of high jumper, Blanka Vlasic since around 2003 when she came 7th in the World Championships. She is another woman who probably wouldn't hold back in handing out the odd "eww no". She is 6'4" and is built like she was made to be a high jumper - which in some ways she was - her father was a decathlete, her mother a basketballer. She was world junior champion, is current world champion, and has also won the last 34 high lump competitions she has competed in.

She is also an outrageous extrovert who loves to celebrate after a big jump with a little dance. She poses, struts around, flirts with the crowd, and generally has as much fun as she possibly can. And she does it in a way which only eastern European women seem to be able - she has an air of "I am better than every single one of you" that would put Anna Kournikova and Maria Sharapova in the shade (which is a lot easier when you have won 34 competitions in a row).

She didn't have a great qualifying jump this morning. She actually missed once at 1.93m (to put this into context, she has jumped higher than 2m in her last 16 competitions).

But today was wet and generally horrible conditions for high jumping; I still back her to win - and should it be dry, you can guarantee she'll raise the bar to 2.09m and try to break the 21 year old world record. And if she does it, expect a pose even Usain Bolt wouldn't be able to match.
***
Usain Bolt loves cricket, and used to be a handy fast bowler. He is a huge fan of Matthew Hayden - which no doubt pleases Hayden, if only because Hayden knows he'll never have to face Bolt charging in off the long run.

Now Bolt won't win all three at London - the program would be absurd. But he has run a 45.27sec 400m, so it would scare the willies out of 400m runners everywhere if he decided to take the distance seriously. And the fact that this discussion would even take place shows how unique this guy is. Forget worries about steroids, this guy is the Tiger Woods of running. He is so good, I'm betting long jumpers get nervous when he watches them for fear he'll think about giving it a go.
***
9:04pm: Well a good start to the night - ino a penalty shoot out the Aussie women's won bronze in the water polo, and then straight over to the athletics to show the women's 1500m heats with Sarah Jamieson and Lisa Corrigan.

Jamieson comes 5th. It's a fast time, but she'll be sweating on the next 2 heats to see if she gets through...

A few highlights of tonight's athletics - the women's 200m - my favourite is Allyson Felix, but I suspect the Jamaican runner, Campbell-Brown will be the one to beat. The Americans may need to rethink having their trials only a month before the Games. It seems like the American sprinters have all had to peak too early, and are a bit off the boil here.

I'm not a big women's javelin so I won't even bother tipping a winner (oh yes I will - Barbora Spotakova).

9:20pm: Lisa Corrigan comes 8th or 9th in a slow time - so Jamieson now only has to hope the last heat is also slow.

The men's 400m final is always a big one for the Americans, and this year is no different. It'll be between LaShwan Merritt and defending Olympic (and current World) champion, Jeremy Wariner. Merritt won the USA trials, but I'm still going with Wariner.

The men's 110m hurdles should be won by current world record holder Daryon Robles, though I don't think a world record will be set.

The men's triple jump is fun to watch - but Channel 7 hate field events so don't bother waiting up for it. I'll go for Philips Idowu of Great Britain to add to their gold medal tally.
***
9:27pm: Women's 200m up now... Great run by Campbell-Brown. So strong off the blocks. Just blew Felix away. (And as an aside, does Raelene Boyle love Jamaican runners or what?).