Madonna and the Dollar

There are times when as an economist, you probably wish you could take back some of the things you have said; like say Bill Evans, the chief economist of Westpac. Here's what he said back in May:

But it is Westpac's global head of economist Bill Evans who is the most bullish, predicting the Australian dollar will peak against the greenback at $US1.01 by March 2009.
Mr Evans forecasts the Aussie will reach US99 by late this year before shooting through the magical $US1 mark in early 2009.
"It seems a huge stretch to call parity with the US dollar," Mr Evans said."However the reality is that we are almost there. In the context of regular volatility in the Australian dollar, a 6.5 per cent move from current levels would be quite unremarkable. 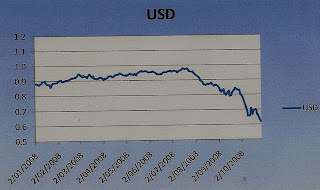 Yesterday, the RBA for only the third time since 2001 intervened in the currency market to try and prop up the $A. An exercise in futility if there ever was one. Glenn Stevens might as well try and hold back the tide, as keep the dollar from falling.

Malcolm Turnbull has predictably called for "bi-partisanship", though God knows what he expects the Government to do - the foreign exchange market is the most free-market thing going around. On a daily basis, roughly $1.5 trillion is traded, so the amount a single government (or more accurately, central bank) can do is pretty limited.

Now exchange rates going up and down always involves winners and losers. And they can also be a bit confusing (basically because we kind of do the calculations backwards).

So when the exchange rate goes "down" to say 60 cents (which is what it pretty much is now); that Violet Crumble in America now only cost 60 cents - great if you are exporting Violet Crumbles to the USA because more people over there will want to buy them. However that Mars bar which last week cost $1.25 now will cost $1.66. Not good if you are importing Mars bars (especially if you have deals with shops to keep selling them at $1.25 - you'll lose money while that contract is operating, and once it is finished, you'll have to raise your prices, so inevitably more people will stop buying Mars bars, and switch to say Violet Crumbles).

So basically when the Aussie dollar goes through the floor like it is now, it's not a good time to buy stuff that comes from overseas - that book from Amazon that cost $40 in August when the exchange was at 97 cents, would now cost $65.

That also applies to stuff that stores have imported - like big screen plasma TVs. So get in now if you want a good deal from JB Hi Fi, because most likely they're still selling TVs they bought when the exchange rate was good, but sooner or later they'll be having to buy TVs at the 60 cent rate.

A mate a work wondered if that would also mean the end of cheap DVDs and CDs as well.

On this score, I'm not so sure. Think about how cheap CDs and DVDs can be now - if the store can afford to sell a DVD for $6.95, imagine what the profit margin is on a DVD that costs you $29.95. It doesn't cost more to make the latest DVD - the quality is no better - the fact that the latest special edition of The Godfather can be snapped up for $15, shows they can churn those suckers out for bugger all. So the price might go up marginally, but I'd expect the expensive items - plasmas and imported cars - to be the things that really go up.

But in truth, the prices have got so low that we have all really become spoiled.

The other day I was in JB Hi Fi and I saw a copy of Madonna's Like a Prayer going for $10. Now in my youth, I was as big a Madonna fan as one can be before requiring institutionalisation. Back then buying a CD was a major purchase, I used to have Like a Prayer on tape, but never bothered to buy it on CD; and while I think it's a great album, standing in the line at JB HiFi I thought... $10? Nah too much.

Ten bucks is too much for a CD?! Unbelievable, and something I would never have imagined myself saying back when I was at university, pining for music.

To give you some idea how cheap that is, back in 1990 a CD cost pretty much $29.95, standard. A bit cheaper at K-Mart, but not too much. Back then a pack of cigarettes was around $3. Tonight while at Coles I had a look at the price of cigarettes and the same $3 pack would now cost around $12. Therefore, back in 1990, Madonna was worth around 10 packs of cigarettes (or 250 individual cigarettes). By comparison, buying a Madonna CD in 2008 will set you back around 83% of a pack (or about 20 cigarettes).

So if back in the 1990s you were able to buy up a shirt load of cigarettes and were able to store them so they kept all their carcinogenic properties and addictiveness, you'd be sitting pretty right now - your investment would have increased about 300%, or a 16.66% average return. But if all you cared about was exchanging those cigarettes for Madonna CDs, then your return would have gone up 1,100%.

Of course this supposes that you can front up to JB HiFi and pay for your CDs with a pack of Winfield.