Sport is not a fairy tale 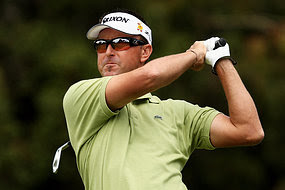 Yesterday, after finishing his third round in the Australian Masters Golf tournament in the lead, Robert Allenby told how his mother was dying of cancer. An emotional Allenby said:

"Mum is the best mum in the world and I really want to win for her". He told how the family had decided last Monday "to take her off any more treatment''.
Allenby, at Number 29 in the world, was the highest ranked player in the tournament, was the favourite, and, as a local from Melbourne, the fairy tale was all set - his mother was in attendance following him around in a golf cart, the crowd was on his side, and in the second round he had made an amazing albatross. All that was left was for the script writers to do their work, and the tears of joy could flow.
Alas, sport is not written by playwrights who know what the audience wants to see. Greg Norman doesn't win the US Masters, Ron Clarke doesn't win a Gold Medal at the Olympics, Pat Rafter doesn't win Wimbledon, and Robert Allenby doesn't win the Australian Masters for his Mum.
He was doing ok - holding the lead or one behind - when he approached the Par 3 15th. In the first two rounds he had pared the hole, in the third round he had made a birdie. As he stood on the tee he knew he needed to make at least one birdie over the last 5 holes. Marcus Fraser had finished his round on 12 under, and Rod Pampling a hole ahead was on 11 under (equal with Allenby). Pars from here on wouldn't be enough. But the wind was picking up, and Allenby, an emotional, fire-tempered player even when things are going well, had struggled to get anything going all day. He had made solid approach shots, but just couldn't buy a putt.
And so with the wind picking up, he hits his 6 iron tee shot into the front, green-side bunker. He catches his second shot fat - the ball just makes it out of the bunker but dribbles into the adjacent sand trap. His tournament is over. He knows the best he can do now is bogey, which will put him 2 shots behind with too few birdie-friendly holes to play.
He leaves his third shot in the bunker. This is sport being utterly indifferent to romance. His fourth shot flies past the hole, and leaves him with about a 20m putt for double bogey.
At this point, it is not hard to envisage that beneath his trademark sunglasses the tears are beginning to well. It is over.
And then he makes the putt. The camera watches his face as the ball falls into the cup - his expression is a mixture of frustration and despair - only now, when it is too late, does he make a putt. Only now, when it won't matter if makes every putt from here to the 18th, does he find the cup. He takes off his glasses and wipes his eyes: frustration mixed with despair mixed with sport.
And yet, sport doesn't care about this pain. He still has three holes to play. He can't walk off as though in some nice, tragically written film and let the screen fade to black. No, he must play out the round. He has to spend the next 30 minutes walking the fairways knowing he won't win this one for his mum.
After hitting his tee shot at the 16th, he goes to his mum sitting in her golf cart and they hug - her tears obvious; his hidden, as ever, behind his sunglasses. His face attempts to keep the expression of the inscrutable, professional golfer, but it is obvious it is that of a heartbroken son who wanted to give his mum one last present to say thanks for everything.
But sport is not scripted; any fairytale victory requires the same amount of hard work and skill and luck and luck and skill and hard work that any victory requires. And that is as it should be. Allenby would not let another player win just because it would be a nice story, so neither would he expect others to gift him a victory. Professional golf, like all professional sport, is played for keeps - it is a person's livelihood. For many in the field, a win in this tournament would be their career highlight; for almost all, it is a dream that will never be realised.
Allenby has won the tournament twice; it is not a tragedy he didn't win this week. It is a tragedy his mother is dying of cancer - and Allenby who is a patron for Challenge Cancer Support Network would know that tragedy on the sporting field is nothing to tragedy in life; but that wouldn't make the loss any easier to bear.
That Allenby failed to realise his perfect ending does not diminish sport - in fact it highlights why we who love sport and who hold it so dear will continue to love it, continue to watch it, and continue to play it.
Sport is not scripted, and thus when the fantastic occurs we know it is not through CGI, or because there were 22 takes before the perfect moment occurred. Sport is the ultimate reality show - done without editing, done without faked challenges. It is non-fiction, and yet incredibly at times it seemingly merges with fiction, and dreams do come true.
It's why we keep coming back to it. Those who love sport also know that while maybe the story we want to come true doesn't always do so, with every victory there is a tale, and with every tournament, or match, or game, another waits to be told.
Posted by Greg Jericho at 4:45 PM