The Changing Tastes in Movies, or the Change in Movies?

When writing about the nominations for this year's Best Picture Oscar, I wrote about how there seems to be a lack of adult dramas that Hollywood used to do well; instead everything seems to be more targeted towards teens - comic book movies etc.

I decided to have a look at the breakdown of films over the last 20 odd years to see if anything stands out.

Box Office mojo breakdown the films released in the USA according to their rating - G, PG, PG-13, R and NC-17. Now NC-17 doesn't really count because so few get released with that rating (basically because many theatres refuse to show those films), so I won't both with that.

The USA rating of R is equivalent to the Australian M or MA ratings. The PG-13 is what it says "PARENTS STRONGLY CAUTIONED—Some material may be inappropriate for children under 13". So PG is actually less adult than PG-13. The PG-13 came in in 1984 when the gap between PG and R seemed to be getting too wide.

It only accounts for between around 2 and 6.5% of all movies released each year. Not a lot has changed - some years a few more, some years a few less. Generally as well the movies account for a slightly 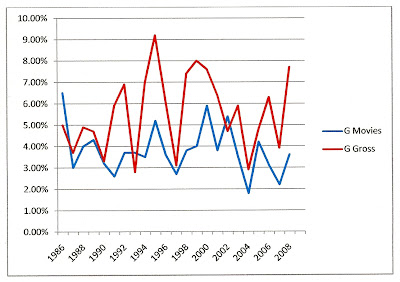 higher percentage of the box office

When we look at the PG rated films however, we do see a distinct pattern. From accounting for 20-25% of all films released in the USA in the late 1980s, to over the last decade accounting for only around 10-15%. In terms of box office, the red line is very similar to the blue line - but as with the G rated films, again the box office accounts for a greater percentage than the amount of films. 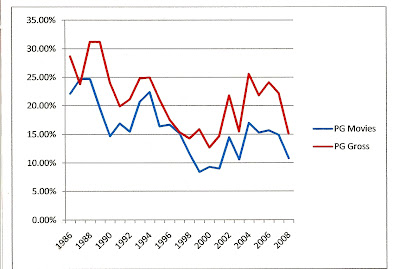 With the PG-13 Rated films though, we really start seeing a big change. The drop in PG rated (more kid friendly) films shown above is inversely replicated here. From accounting for 20-30% of all films release din the USA in the late 1980s, PG-13 films now account for around 35% of all films.

Something has obviously happened. Not only are more of these films being made, they are becoming much, much more popular. 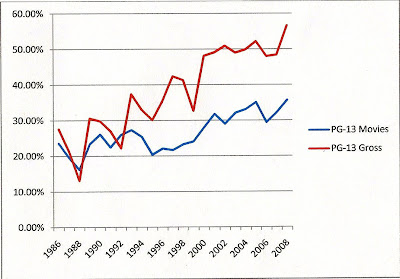 How have R rated - the more adult films fared? Not too well. The number of films with an R rating have not dropped all that much - basically they still account for around 50% of all films released in the USA. But check out the drop in popularity. From accounting for just over 51% in 1987 to a mere 20% last year. It's the only rating where box office is always lower than the number of films. 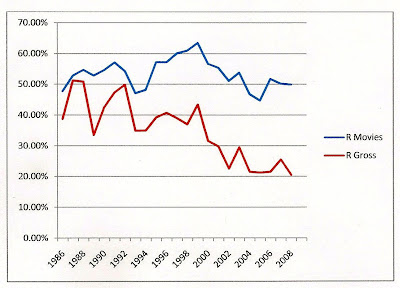 Well here's a list of the to eleven grossing PG-13 films last year:

Yep The Dark Knight, Iron Man and Quantum of Solace are OK for 13 year olds, in fact OK for any kid in reality - remember R means that anyone under 17 should be accompanied by an adult, meaning PG-13 don't need adults there at all, just a sense that parents have advised their kids...

I'd say only Goodfellas, The Godfather Part III, Misery and possibly Another 48 Hours would be still R rated.

So is it people's tastes that have changed, or is it that what was popular then still is popular now, it's just that the lower end of the 1980s R rated are now getting PG-13 ratings?

Possibly, but note that the same number of R rated films are getting made. But they are not connecting with the audience like they used to. Perhaps the continual easing of what constitutes PG-13 has led to people viewing R rated films as being stronger in content and more "adult" than they were in the past?

To be honest I don't know if I have an answer, but any studio executive looking at these graphs would think only one thing - more PG-13 please, and less R.

OK maybe there will be the same number of R rated films, but the budgets will be less, the money spent on development for them will be less, the casts will be expected to take pay cuts, so better actors will do less of them (much better to do some easy money action stuff).