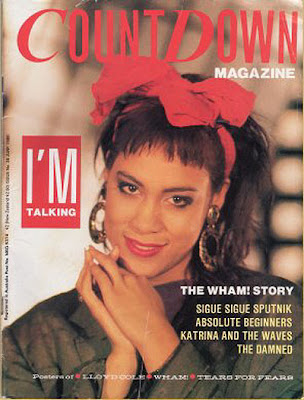 In 1985, I got serious about music. Every month meant buying another copy of Countdown Magazine (infinitely superior to Smash Hits - though I bought that as well), and Take 40 on Saturday and Sunday mornings was a must see, and the Top 8 at 8 on the local AM station was a must listen.

Music meant so much to me that I wrote an essay for English about responding to Pat Boone's criticism of Duran Duran's "A View to a Kill" (apparently he thought it was satanic - you know the whole "dance into the fire" lyric). Now you have to be fairly well into music to get steamed up about Duran Duran, and I don't think I need to produce any further evidence to demonstrate the hold pop music had on my life.

It was also around this time that music started seeping into my subconscious. From this year my life began to have a soundtrack. I was on a bus in Perth going from the airport to an athletic competition (I was into athletics in high school) and playing in the bus was Cold Chisel's "Saturday Night". Why do I remember that? I don't know, but I do know that on the flight home one of the songs I heard on the in-flight music channel was Phil Collins "One More Night".

Music does this to you; it seeps into your life and produces memories like the smell of a madeleine biscuit in In Search of Lost Time. A song can remind you of a person; an album recalls a moment, a break-up a reunion.

For me 1985 was a year full of Madonna singing Crazy For You, George Michael being 1005 heterosexual while wearing fluorescent fingerless gloves in the video for "Wake Me Up Before you Go Go" - I played table tennis that year and I recall doing an impersonation of George one night while wearing my friends yellow fingerless gloves - the important thing is the eye movement right when you sing the lines "it's cold out there but it's warm in bed" (laughs were pretty easy at table tennis nights).

1985 was perhaps the only year where girls could write I love Morten on their pencil case; but A-ha gave them that ability. I was friends with a couple girls (who also played table tennis) who were absolutely devoted to Morten Harket and the other Norwegian lads, but who probably knew better and thus would react to my renaming him as Morten Carked-it with faux howls of disgust and a few laughs (yes, the laughs at table tennis were very easy to get).

But enough reminisces of my trying to charm girls with humour (they always go for the funny ones don't they?). 1985 was also for me the time I picked a band to be my band (no not U2, though they were there). Nope, for me the band to live and die by was Go West.

Well look, in my defence "We Close Our Eyes" is a damn catchy song... and hell they did get voted Best New Band in the 1985 Countdown magazine readers poll.

And so while it was definitely my favourite song of the year, it's not the song I choose to be my song of the year for 1985. That pick goes to Aussie band, Do Re Mi, and their one hit (of sorts) Man Overboard.

There was something about the song that just got me. It was adult - the lyrics were pretty edgy for the mid-80s. The video was also intriguing. To this day I have no idea what the images have to do with the song, but it just got under my skin. The start of the video with the camera walking down a run down inner city street got the interest of me, the young country town boy. I wanted to know the street; I wanted to feel urban. I had reached a point in life where I knew without doubt my life was destined to occur outside the parameters of a little town. I wanted to live in a city teeming with every type of people.

I hadn't seen the video for well over a decade when a couple years ago I saw it on youtube, and it was amazing how the first minute of the video brought back the feelings I had back in 85. The fact that I now don't wish to live in "the big city" - or at least Sydney - and am comfortable in suburbia, rather than some bohemian inner city apartment is irrelevant. Music takes you straight back to where you were; and so I was taken back to 1985 to when I dreamt of being so many different things, that it was hard for me to watch the video without feeling some moments of regret, without sighing and wondering of what might have been had not a thousand separate moments that led me to where I am now not happened.

Oddly I had had a copy of the song for years, and while it always took me back to Year 9, it was the video that really brought the memories flashing through my brain. And for the first time I realised the scenes of the men drinking was taken on Anzac Day (at the 1:30min mark you can see a guy who is a Vietnam War veteran on account of the medals he has on his suit - still don't know what it has to do with the song).

The band also interested me. They and the song they were singing weren't the standard easy listening pop. These guys (especially Deborah Conway) looked 'arty' -they seemed like people who would laugh derisively at the fact I listened to AM radio; that I thought George Michael was straight; that I only had a mono speaker tape player to listen to music. They and their song were city; and I wanted to be them.

When I did get out of the country and got to go to uni in the city, I was lucky enough to be around when a few of my friends were going down to Elder Park where Deborah Conway was singing at a free concert (not sure why - it may have been Australia Day), and when she announced the start of this song, I have to say it felt pretty good to be able to feel like I was now one of those who could laugh derisively at country AM radio and mono speakers, if only because I was able to turn to my friends and say "I loved this song in Year 9", because let's be honest, it's a lot cooler than if I was making that statement after hearing "Wake Me Up Before You Go Go".