Flick of the Week: "Obviously you're telling the truth, for why would you invent such a ridiculous story?"

This week's flick of the week takes us from Schindler's List with music by the great John Williams to the greatest ever Hitchcock movie not directed by Alfred Hitchcock (and which imbd tells me Williams was an uncredited piano player of the score) of Charade. (It also allows me to get back to my list of "they don't make like they used to movies"

This wonderful romp is set in Paris, with Cary Grant and Audrey Hepburn (you couldn't really go wrong with that premise could you?), and has a fantastic supporting cast featuring George Kennedy, James Coburn, Walter Mathau, and Ned Glass (whose most famous other role was Doc in West Side Story). 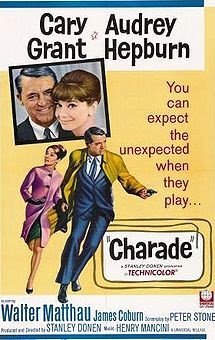 It is a great twisty thriller in the days before that meant everyone gets murdered in the most gruesome manner. Now ok, I watched No Country For Old Men on foxtel last night, and it was fantastic - very much edge of the seat stuff. But give me a choice between that and Cary and Audrey running around Paris trying to find some money stolen from Germany during WWII before the bad guys catch them (or is Cary bad?) - well now, that's no choice at all. Set up the DVD, get me a big bag of potato chips and off to Paris I go.

Like many Hitchcock films there's much humour in between the thrills, and twist upon twist - though never hackneyed, and the score by Henry Mancini perfectly captures the time of Paris 1963. In many ways it's the last of the 1950s thrillers - after this the cynicism of the times would kick in, and such romantic enjoyment as this seemed to go out of style - it certainly has a vibe more in keeping with To Catch a Thief or North by Northwest than Bonnie and Clyde.

Grant at 59 felt far too old to play a romantic lead - especially to Audrey Hepburn who was only 33 - and thus scenes of them kissing etc were pretty much cut out of the script and it was made clear that he wasn't the one chasing Hepburn's character but the other way round (can you imagine Cary Grant worrying that people might think him a bit lecherous? He was Cary Grant, 99% of the women in the world at the time wanted to be with him!)

But despite this, the chemistry between the two is wonderful - not overly sexual, but they obviously enjoyed being together. In fact the whole cast acts like they know they're in a great film and they're determined not to waste it. If you only know Mathau from his 'Odd Couple' films with Jack Lemmon, this will be a revelation.

I won't go into the plot too much - suffice to say Hepburn plays American Reggie Lampert, who is widowed at the start of the film and who doesn't know a hell of a lot about her husband's past - and then his past comes to visit. Cary Grant is Adam Canfield (or is he), a man who may or may not be trying to help her.

Cary Grant would only make two films after this (the lovely Father Goose and Walk, Don't Run, which I haven't seen yet) though he would live till 1986. He has probably been in more of my favourite films than just about any actor and he never turned in a bad performance. If you haven't seen any Cary Grant movies, even though this is one of his last, it is certainly a great place to start. And heck, Audrey Hepburn thrown in for good measure? Stop your whining, you're damn lucky to be able to watch it!

Below is a cool edited clip off of youtube which shows parts of the film to the backing of the theme song - it doesn't give away the ending. Enjoy, and then go out and get it (or better still buy it- it's the perfect Friday night flick):