Flick of the Week: "Walter, you're wonderful, in a loathsome sort of way."

For this week's Flick of the Week we go with Cary Grant from the Hitchcockesque Charade, to one of the greatest comedies of all time, Howard Hawks' His Girl Friday.

His Girl Friday is, with The Maltese Falcon, that most unusual of films - a remake that is better than the original, in fact so good that people forget it is a remake. The original version was the Ben Hecht play and film, The Front Page, which was a comedy set in the newspaper world of the 1930s. Hawks' great addition to the original was to make ace male reporter Hildebrand Johnson into ace female reporter Hildegaard (Hildy) Johnson. And thus a seminal screwball comedy was born.

His second brilliant decision was to allow the dialogue to overlap, which allowed Grant - playing newspaper editor Walter Burns, and Rosalind Russell (who plays Hildy) to let rip with perhaps some of the fastest dialogue ever captured on celluloid.

The two throw zingers at each other, barely waiting to gather a breath before letting rip with another barb. Whereas some screwball comedies like to have a ditzy character causing havoc (Bringing Up Baby), in this film both Grant and Russell go toe to toe, line for line; matching wits at ten paces.

The plot involves Hildy returning to the newspaper to confront her ex-husband Burns, and to tell him that not only is she quitting the paper, she is also getting married to mild-mannered Bruce Baldwin (played by Ralph Bellamy). Burns who is still in love with Hildy does everything he can to put a stop to the marriage and also get Hildy back working on the paper on the biggest news story of the year. 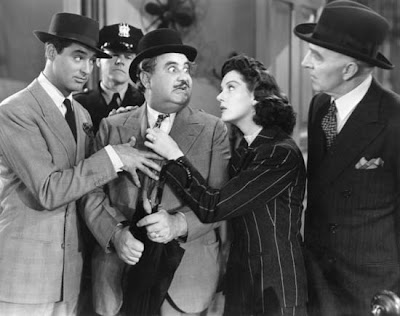 Watching Grant in action reminds you that he is one of the best film comedians of all time - his timing and delivery is perfect - and he possesses more charm than seems possible for one man.

Russell on the other hand is "moxy" personified. Her character is as strong a female character as has ever been seen and actresses of today must look at this film and sigh in envy.

The supporting cast is full of character actors, with Bellamy playing for the second time a man who comes between Grant and his ex-wife (he played essentially the same role two years earlier in the amazing The Awful Truth).

The screenplay is sublime, even having a meta-fictional aside when Burns remarks of Baldwin "He looks like that fellow in the movies - Ralph Bellamy". And at 92 minutes, like all great comedies, it gets in, makes you laugh, and then gets out.

Best of all there are cheap DVD copies a plenty around, so pick one up and see what happens when everything in a movie is click perfectly.

Finding a good clip on youtube is tricky, so here is the first 9 minutes of the film. It serves as an excellent entree into the flavour of the film.

The movie is available on www.hulu.com .