A short post tonight because I was busy doing real life things today and thus missed most of what happened – which wasn't much.

Gillard was on Oakes this morning – she did fine. Abbott was on Insiders – he did ok I guess, if you can accept him dodging the question on whether or not Australia's economy is the envy of the world and also think his comparing the cost of installing fibre to the home in Korea and Singapore to the NBN is apples to apples. 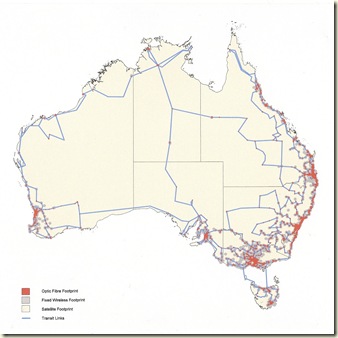 Here’s a tip Tony, take a look at this map of Australia and ask yourself if you think if might be a little bit bigger job than that of Singapore or Korea?

But then the “big” news of the day was the debate over a debate.

As soon as he suggested it, I and most likely the rest of the Insiders audience, knew that the ALP would respond by saying yep – but let’s have a debate while we're doing it.

And so it was. Abbott of course doesn’t want this. In a debate he won’t be able to sprout his usual bullshit and not get picked up on it (David Speers at Rooty Hill developed selective deafness and decided not to pipe up with a “well that’s actually complete tosh, Tony”). He also won’t be able to just get Dorothy Dixers such as “what will happen if the ALP and the Greens get in and bring in an ETS?”.

Pretty much Abbott loves town hall meetings because he can lie during them, and then later say he was just caught up in the moment.

You can’t do that in a debate.

In the US Presidential election they have a “town hall” debate – why not here? Well we know why not.

Abbott hates answering questions on anything other than debt, boats, mining tax and boats. The economy? Nup. Even on the mining policy they put out yesterday for a good period of the press conference he was reduced to second banana as Ian MacFarlane took all the tricky ones.

Today he gave the press pack a whole 12 minutes – and refused to give an answer on why he wouldn’t debate Gillard. Later tonight he came out for another quick presser to say he was challenging Gillard to hold another town all meeting – saying

“That's my challenge to the Prime Minister to have a town hall meeting in Brisbane where the two of us can spend an hour talking to the Australian public about the issues that matter to them.”

Sorry Tony, that dog won’t hunt, and if the media give him a free pass on that then they don’t deserve anymore than 12 minutes.

Both Abbott and Gillard can spend two hours talking to the Australian public they just should both be on the stage at the same time  so they both get the same questions and so that if either says something full of fertiliser the other can jump in. Otherwise the exercise is a sham.

Today there was also lots of attention on polls.

The Galaxy marginal poll taken from last Sunday to Thursday across an odd assortment of marginal and not really marginal seats was extrapolated for no logical reason and also done incorrectly to have the Liberals winning by a seat. Well all I can say is if they have to use the dodgy reworking of statistics that we saw today to get the Liberal Party over the line, then the ALP will bolt it in (not that that is a prediction!).

The Newspoll will be out tomorrow (actually tonight). Last week it was 52-48 to the ALP, my guess is this time the ALP 2PP will be anything from 50-52. They had a very good week last week, but that doesn’t mean they can’t go down – remember 50% would still be within the margin of error and could be classed as statistical noise, but of course that’s not how it will be reported. Anything less than 50% would be completely rogue – you don’t have the good week the ALP had and lose 3 percentage points.

The ALP to be honest the ALP won’t mind too much people thinking it is close – this week they will run long and hard on the “Do you REALLY want this fool to be your PM?” (or words to that effect). She may not have been PM for long, but Julia does have some incumbency value – remember all the periods she acted in the job while Rudd was OS – in 2008 everyone was saying how good she was at it. Whereas Abbott… geez… that is still a step the voters haven't quite taken yet (even the Galaxy marginal polls had Julia well ahead as preferred PM, and only around 30% believed he would actually deliver on his 4 part campaign pledge).

So strap yourself in for a fun, neurotic fuelled 6 days. Oh and for the journalists following Abbott around, perhaps you need to take a tip from John McEnroe… 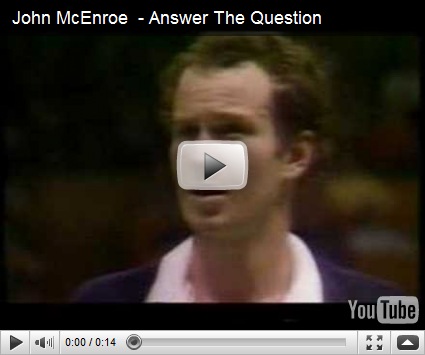 UPDATE: Well the Newspoll is 52-48. No change from last week, the ALP’s primary vote is steady on 38%, the LNP has gone down 1% and the Greens up 1% to an amazing 14%. My calculation have Newspoll calculating the Greens preference flows to the ALP of around 77% and 45% of “the Others” going to the ALP. The Nielsen Poll had the Greens preferences flowing the the ALP at 86%. If that were done with this poll the ALP’s 2PP would be 53.19%. Either way, while the ALP + Greens Primary is over 50, the Libs will not win (regardless of what the marginal polls say).

McEnroe says it all. Props to him because I am speechless having heard a former PM declare his hand.

Which was. "This is what I would do. Dont vote"

If we wonder about the "Me Generation" we need not go back that far to find the source.

Leave me in my misery.

if we get stuck with rabbit, I'm hiding in here till it's over.

Mr Rabbit has George Bush "qualities" that make me very afraid....he could win and unleash a very ugly Australia that refuses to account.

+ 1 db. Australia is facing its 'George Bush moment' in this election.

Most of the population would like to hear a debate about the ECONOMY while Mr. Rabbitt is fretting about the poor people of Brisbane missing out on what Rooty Hill RSL had. What a scammer. Meanwhile, back at a hotel somewhere in Australia, Joe Hockey is fuming on Twitter about a Labor ad saying mean and nasty things about Tony. GOOD.

Hey, I live in Brisbane and don't feel at all concerned I will probabky miss out on a "Rooty Hill" moment!

The focus on the NBN and some basic benefits it can deliver is a shrewd policy. No one an argue against the sick receiving the best medical care.

The cheap alternative of maybe a radio/hifi connexion near you, if you are lucky and if at the end of every street there is a tower to broadcast and receive the data for onward transmission is the key part of this policy that no one seems keen to spell out to the voters.
Just who would pay to construct all the required radio/HiFi towers? Telstra? Why?
How can radio/hifi move data faster than speed of light? What radio bandwiths will be used considering that most have already been sold?

I just hope he does not have the facility to call a friend if he gets stuck on a question.

Am looking forward to today's take on the shennanigans, especially the boatphone. I know there are bigger expressions than LOL but I have not yet found one that will suffice.

BTW, my prediction of a week ago is realising: Nellies? Pour yourselves another glass.