Last week I plaintively asked that journalists in this country focus more on policy. After seeing how most of the commercial news organisations have handled the release of the Orgill Report on the the Building the Education Revolution I almost take it back.

Wow it has a quote! It must be right then. OK, let’s go see where they got the quote “very valid concerns” from in the report.

From our investigations to date, the majority of complaints raise very valid concerns, particularly about value for money and the approach to school level involvement in decision making.

So let’s go through it. There were 254 complaints. Which sounds like a lot until you realise there were 10,551 projects. Or as the report makes clear that 254 represents 2.7% of all schools. Again lets be clear two point seven percent. Or let’s be even clearer that mean 97.3% of schools did not complain – and Orgill in his press conference made it clear that they asked and advertised widely that they wanted any complaints, and he said he never felt any hesitancy of anyone to provide information. Now of those 2.7% “the majority” – not all but “the majority” raised “very valid concerns”.

Now these may all be “very valid claims” but do they call into question the worth of the BER itself? I would suggest, not.

Now look I am not suggesting everything about the BER was perfect. The New South Wales Government was responsible for most of the cost concerns – and projects done under them were certainly higher than elsewhere, but the Report also notes:

The NSW Government has had the most challenging BER P21 implementation task. It accounts for $3 billion or 22% of the entire BER P21 program (36% larger than the Victorian Government, the next largest education authority, and three times bigger than the NSW Catholic system). An analysis of progress in the figure below shows that relative to the other large government education authorities, NSW has delivered impressively against the required implementation timeframes (95% of projects completed or construction commenced, versus 64% and 60% for the Victorian and Queensland Governments respectively).

Basically saying that NSW was good at doing it quickly, but perhaps went a bit too quick.

But let’s look at why this project was undertaken – it was done to provide stimulus to an economy that was about to got into the toilet. Did it work? Well first let’s remind ourselves of this graph: 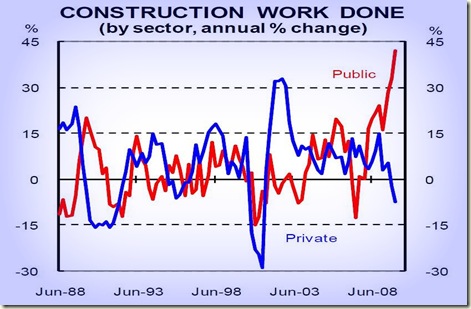 Hmmm  wonder what was all that “public construction” that sent the red line shooting upwards?

But what does Orgill say?

Notwithstanding the validity of issues raised in the complaints, our overall observation is that this Australia wide program is delivering much needed infrastructure to school communities while achieving the primary goal of economic activity across the nation. There has clearly also been an added benefit of construction industry up-skilling, beyond just sustaining employment.

So not only did the BER create work for builders, not only did it provide valuable infrastructure which will be around for generations to come, but it ALSO provided builders with new skills which they will be able to use on other projects from now on! And it did this despite the project having to be rushed out the door, and yet still achieved a 97.3% satisfaction rate.

Here’s Orgill on the 2.7% complaints figure:

While complaints are not the only measure of stakeholder satisfaction, the Taskforce believes this is an important indicator that, in aggregate, BER projects are being delivered to the satisfaction of school communities.

But will the media focus on the 97.3%? Of course not. No they’ll focus on the 254 schools (they will ignore the 10,551 projects figure). They’ll justify it by saying they are concerned about any Government waste. But really they’re full of it, because they’re not calculating it properly. When asked about “waste” Orgill in his press conference replied that to calculate the waste you had to ask yourself which is more wasteful – the 2.7% of projects that had complaints or the people who would have been unemployed had the BER not happened.

The media for the most part don’t seem to be able to grasp this. Even the usually sensible Annabel Crabb on The Drum tonight was posing the question that defending this program was essentially defending waste. So let’s ask Nobel Prize wining economist Joesph Stiglitz who’s in town to see what he thinks of it:

"You were lucky to have, probably, the best designed stimulus package of any of the countries, advanced industrial countries, both in size and in design, timing and how it was spent - and I think it served Australia well”

KERRY O'BRIEN: There's been a lot of criticism of waste in the way some of Australia's stimulus money was spent. Is it inevitable if you're going to spend a great deal of government money quickly that there will be some waste and can you ever justify wasting taxpayers' money?

But, sigh, this is mostly ignored by the media. I have often argued that this Government has been hopeless at selling its economic credentials, but given the way the media generally reports economic matters, I have to say it’s not all their fault. The media just has a narrative it wants to tell, and facts just get in the way. And if the actual report has some balance (as does the above report in the Australian) don’t worry the headline will get them. Channel 7’s News had a fairly balanced report, but it’s headline screamed “School Waste”!

If the media think a 97% success rate on a $16b project is no good then they should have fun if the economically challenged Chris Pyne ever gets in charge, because he is still sticking to his figure that the BER has wasted $8b. When asked about that figure Orgill said:

"I can't reconcile that figure with the analysis we have done"

That is a polite way of saying that Pyne must have found the $8b figure the last time he gave himself a colonoscopy.

Perhaps journalism has been reduced to the old adage of seeing the cost of everything and the value of nothing. Because if you can’t see the value of 200,000 people having a job who wouldn’t have, valuable education infrastructure being built that wouldn’t have, and a more skilled building workforce than there would have been, all done at around a 97% satisfaction rate then I have to ask, what will satisfy you?

Because the rest of the world is looking at us in awe and wonder and envy.

"Because the rest of the world is looking at us in awe and wonder and envy."

... and will look at us as a bunch of ill informed, inbred, ingrates who obviously don't have enough toes and fingers to count properly if we think we're under invasion from boat people and drowning in debt.

None more so than those that don't grasp the importance of Orgill and Stiglitz's observations relative to Australia's response to the GFC.

Except that results count.Apparently, all of us know that.

Like cranky, demanding kids we want more. And if we consent to that we have given up our roles as parents, as leaders.

This is bullshit. The facts speak and they speak independently of spin offered by both parties.

Like your kids orienteering or running race. Is it important they try and succeed or is it important that some weird, self interested parent cuts them down with a sideline remark.

It's important to know when we are winning.

Do you know what the really obscene upshot of the BER project is? Those 'tradies' that listen to Ray Hadley while they are working on the BER projects will probably vote for the Coalition in the upcoming election. Ungrateful ingrates.
It makes me want to cry that a few demagogues could sway people to vote against their best interests.

I made the mistake of reading the comments on the News Ltd website article on the BER. Apparently this was a colossal waste of cash and the report was doctored by Gillard to blame the states. Labor governments do nothing but wreck the country and stop people getting ahead.

All this from one report. Based on the sort of things that are smaller than rounding errors.

If Tone and the economic illiterates get in, you'd have to wonder what these people are going to do when something gets really messed up. No doubt find some new scapegoats.

Grog, I'm amazed you can sound so calm and collected over this. I'm spitting chips myself.

The glass is 98.5% full, yet all the media concentrated on was the tea leaves in the bottom of the cup. The coverage has been decided, the headlines written. "Waste" is the name of the game, despite all the benefits of the BER program. It really does make you sick at heart to see it.

Take a look at the front pages this morning, Saturday. Hardly a word about the BER. The centrepiece of the Coalition's attack on the government for the past six months has disappeared. The refutation of the Coalition's argument that it contained is dismissed in a puff of smoke. The caravan has moved on. "Rudd: The Soap Opera" resumes. The punters are left with their doubts reinforced by an egregious, mass, groupthink brainfart from the media that says 200,000 jobs aren't enough. Australia the envy of the world isn't enough.

And yes, the tradie who came to my house yesterday was exactly how HBS described him. He'd worked on both the batts program and the BER, employed 8 people, made a fortune... and is voting Liberal.

I gace myself the small satisfaction of ringing him up and telling him his quote was too high, but in a booming economy he didn't sound like he cared. He's alright Jack. He got through the GFC and now he's going to take to the government that did it for him and vote them out of office.

As I said at the outset, I wish I could be so calm about it as you sound.

I agree with other posters. I feel like I am living in some sort of parallel universe, where people are criticised for doing good and praised for doing evil. I saw an Age on-line heading that said something like "Report shows BER 12% waste" with the story then going on to "clarify" that it was "between 0-12%" - just a minor difference! What none of the media have picked up is what I heard Orgill himself say "there was no waste"!

If anyone out there reading works for the Labor Party, can you please research Tony Abbott's budget vs actual performance as minister - I would be staggered if every one of his programs came in under budget - which is apparently now the gold standard of ministerial competence.

Only thing even clearer after the fuss is how Australia needs a public process assesment process.

Need a lists of projects which need, should or can be done. (OK even a few dreamy ones would not hurt here.)

Each of these should be with a summary for each project of details, where, when, cost [e$timate], benefits-to-infrastructure, benefits-to-society, with parts of cost to be met by who - Commonwealth, State, Local Government, Corporation or other interest groups.


From such list our politicians can consult community then make their political decisions.

Well Grog, Paul Murray writing for the West Australian (that well known right leaning rag) knows why the complaint rate was less than 3%in the BER. Apparently noone ocmplains when they get money thrown at them.