Flick of the week: “Hold on to yourself, Bartlett. You're twenty feet short”

This week’s Flick of the Week takes us with Richard Attenborough and his role as advisor to Queen Elizabeth in Elizabeth to his role as Squadron Leader Roger Bartlett (Big X) in John Sturges’ World War II classic, The Great Escape. 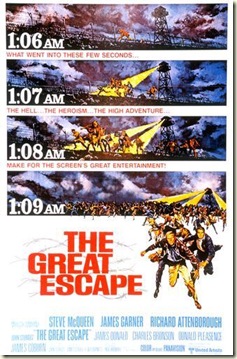 Last week when I bemoaned the lack of historical accuracy in Elizabeth I wrote that I was a bit of a film hypocrite on the issue. Sure enough here we have a film that strays a fair bit from the script. This film about the greatest ever attempted escape from a Nazi Prisoner of War Camp had a hell of a lot of exciting reality to deal with – but in true Hollywood style is gave it a little oomph.

Firstly the events are contracted, and secondly the Americans have a much bigger role than in reality. On both issues I have to say I don’t give a damn.

Yes we can read in Australian Paul Brickhill’s  excellent book (he also wrote The Dam Busters and Reach for the Sky) on the escape that the Yanks were involved but were certainly much more minor players, and no Americans escaped because they were transferred to a separate compound just before the escape.

And of course no one tried to jump the Swiss border on a motorcycle.

But for some reason it just doesn’t matter to me.

I can understand people disliking the fact that the Yanks get a bigger role, but this film certainly doesn't put the Brits and other Commonwealth soldiers in the shade (like say a modern WWII POW film like Hart’s War). Perhaps because Englishman James Clavell co-wrote the screenplay, the Non-Americans get their due: Bartlett as Big X is definitely in charge of the show and Gordon Jackson as his MacDonald “Intelligence” is the Scot who keeps everyone in order. Plus for us Aussies, there’s the Sedgwick the Manufacturer (not totally convincingly played by James Coburn). There are only three yanks, and in reality only two get much screen time – James Garner as the Scrounger, Hendly, and Steve McQueen in the Steve McQueen role, Hilts, the Cooler King.

My history with this film goes back a long, long way. It is not the first “grown-up” film I ever saw – The Sound of Music gets that title. But my first viewing of this was a seminal moment in my life. On seeing not only was I enthralled with this film, but I am pretty sure from this moment on I was enthralled by movies. I just loved every single thing about it – from Elmer Berstein’s amazing score, to the planning of the escape, the tension involved, the horror at the murders, the exhilaration of Hilts trying to get into Switzerland. It is also most likely the film I have watched the most (not including all the many, many Pixar movies I have watched by virtue of being a parent!).

Everything (yes even Coburn’s accent) just fits perfectly. If you’re going to have a bird-watching forger who goes blind, why who else could play it but Donald Pleasance? You need a mono-sibylic Polish tunnel digger? Charles Bronson is your man.

The history of course is glamourized – POW life was not nearly so easy as the film depicts – Brickhill writes of the gnawing hunger which all felt most the time – and how this affected the escape as well – starving men don’t have a great deal of energy. But this is more a product of its time, where gritty realism wasn’t the done thing.

The film has a number of indelible moments – Hilts in the cooler with his baseball, the discovery of the tunnel “Tom”, the escape itself, the stuff up by MacDonald, the execution of the men, Hilts’s jump… Many have received the ultimate pop-culture compliment of being parodied in The Simpsons.

It is easy to dismiss the film as just an action film, but so much of it is done so well that it demands attention. Quentin Tarantino in the 2002 Sight and Sound poll of the 10 Greatest Movies of All-time, put it in his top 12 (also included in his list were The Good the Bad and the Ugly, Rio Bravo, Taxi Driver, His Girl Friday, Rolling Thunder, They all Laughed, Coffy, Carrie, Dazed and Confused, Five Fingers of Death, and Hi Diddle Diddle – an eclectic list to be sure – and no, I don’t know why he listed 12 and not 10). The way the film is edited and shot is so completely foreign to what an action movie looks like now that it seems a relic. Firstly the pace is much, much slower. Hand-held camera? What’s that? The music swells, but it is a score, not a soundtrack. And here’s the real kicker – the entire thing is a monumental stuff-up. Two Hundred and fifty POWs were meant to escape, in the end only 76 got out, and of them only 3 got back to England. Fifty were caught by the Gestapo and murdered (one of the crimes for which Hermann Goering was tried at Nuremburg). 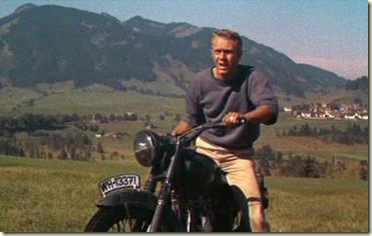 That ain’t happening in any film made now. You think history was tinkered with back in 1963? Pah, made now, the entire escape plan would be the work of Hilts – he’d get it all organised – Bartlett would be his helper perhaps. The Forger, Manufacturer, the two Tunnel Kings, Intelligence? Gone. Played by nobodies in small parts. Hendly as smart guy who knows how to get things? Hilts can do that himself – after all the star must be the star – give him everything. If the screenwriter is particularly dopey, or is pushed around enough by the star we’ll have a flash back to the Hilts and his wife. Heck the whole bloody film will probably start from Hilts getting shot down, and him arriving at the camp a year later with the biggest reputation in the entire POW camp system for escaping.

Do they escape? Well maybe not – Hilts in a bit of pathos would most likely die helping Bartlett get across the border. The fifty? Not murdered, but perhaps killed in a shoot out with the Germans.

And 172 minutes? Well that might be the one thing that doesn’t change, but Michael Bay would make sure as hell a lot more of those minutes were used showing the motor bike chase.

Ah yes, I can see it now, fade to black, try not to throw up in to your popcorn bucket.

That is why this film succeeds. Yeah the final bit with Hilts on the bike is bullshit, but it’s not superhuman bullshit, and it fits with the character, it never goes too over the top, and most of all – he fails. The rest of the film though is played straight. It doesn’t turn into an Alistair Maclean film (as much as I love those) because it always has as that end result the fifty getting murdered.

It is perhaps the only action film based on a war crime. It succeeds because not only is the film done to entertain, it is also done to honour the dead. The film thus has a heart that is lacking in so many action films today – films where the main purpose seems to be to hopefully make enough money so the sequel will get green lit.

Were The Great Escape made today it’d be up for Best Picture – and treated as a drama. I have to say, looking at what won in 1963 – Tom Jones, and what else was nominated: America, America; Cleopatra; How the West was Won; and Lilies of the Field not only should it have been nominated for Best Picture that year (hell Elmer Bernstein didn’t even get nominated), it should have won.

Here’s a few scenes of Bartlett and MacDonald (there’s not much of it on YouTube): 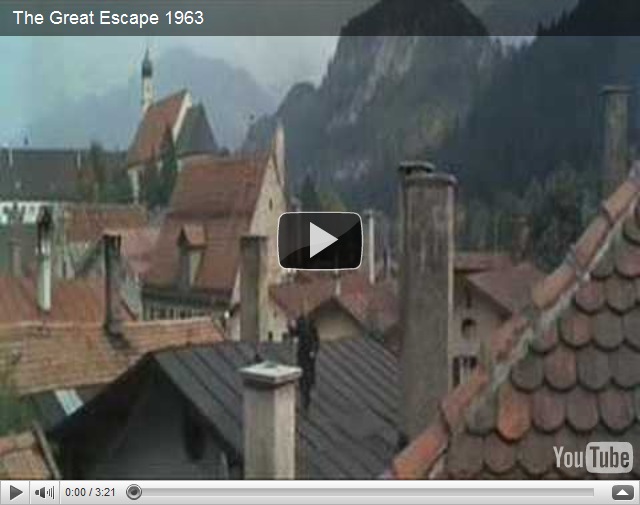 The Great Escape
Posted by Greg Jericho at 8:56 PM

Email ThisBlogThis!Share to TwitterShare to FacebookShare to Pinterest
Labels: Culture, Film, Flick of the week, Memories

Interesting thing about Tom Jones: there's not one complete print extant. But I still think it was a wonderful film.

As was TGE, if only for the music.

I'm a little older than you Grog. Hell, I saw The Dam Busters at the Concord Odeon, Concord Rd, Concord, Sydney (a fruit barn now). Admittedly I was only 3, but I loudly proclaimed the key line (spoken by the Mickey Martin character): "This is bloody dangerous!" after collecting half a tree in the undercarriage, during training (much to Mum's embarrassment).

I also saw HTWWW... in Cinerama - three projector Cinerama - at the Plaza Theatre in George St. Sydney (now a McDonalds opposite the Hoyts complex, but still sporting some of the old Plaza stucco decorations).

My 11 y.o. grandson loves TGE. Usually the more blood, guts and gore in a movie, the better for him. But this one's gotten under his skin. He asks to watch it again and again.

Pity the DVD is so lousy (not being anamorphic) and as far as I know there's no BluRay. However, the fact that it's been on Foxtel recently often presages a BluRay release

We can only live in hope.

P.S. Sometimes I think you and I are the same person, just seoarated by about 20 years. Hell, I even design cinemascope Home Theater optics. Cinema's in my blood.

Anon, that had me snorting my drink through my nose!