If the stimulus worked, why did Americain win the Cup?

So today the Reserve Bank decided to trick the market for a second month in a row and lifted interest rates by 0.25%. The market wasn't really expecting it - though Peter Martin and Michael Stutchbury were leaning towards them going up rather than remaining steady. So it should not have been too great a surprise (actually it was one of those decisions where whatever they did would not be too shocking) 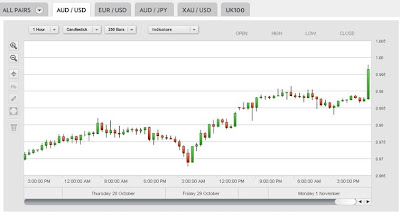 But just how much did it take the market by surprise? Check out the reaction of the Australian dollar the moment the result came out (the green bar at the far right). That's a jump of around a cent, which gives you a good idea of how many traders had factored in the rate rise.

The Commonwealth Bank decided to take the role of most hated shylock-type institution of the week and raised their marginal home loan rate by 0.45%, but only increased their rate for savings on deposits by 0.25%. Yep shylocks. You half expect to them to refer to their vig rather than mortgage rate..

As you can expect Joe Hockey lept into the fray with glee. After giving him such credit last week, it is somewhat nice to see him revert to form:

The Federal Opposition's treasury spokesman, Joe Hockey, says the Reserve Bank's increase could have been avoided if the Government cut back on stimulus spending.
"The Government now owns these rate increases," he said.
"It's done nothing about banking competition and it's done nothing to put downward pressure on interest rates. Australians should be understandably angry about this."
Well now, he may have a good point on the competition front (though it's hard to see anything happening on that front in the short term). But stimulus? Let's have a look at what the RBA said about fiscal stimulus:

Information on the Australian economy indicates growth around trend over the past year. Public spending was prominent in driving aggregate demand for several quarters but this impact is now lessening.

Not exactly powering the economy is it. So what was powering us along so greatly that the RBA is now worried about inflation?

concerns about the possibility of a larger than expected slowing in Chinese growth have lessened recently and most commodity prices have firmed, after a fall earlier in the year. The prices most important to Australia remain at very high levels, with the result that the terms of trade are at their highest since the early 1950s. The turmoil in financial markets earlier in the year has abated, though sentiment remains fragile. 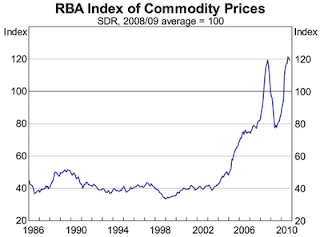 Ah, the terms of trade. A nice easy way to think of what that is is to think of it as our exports inflation rate. So while consumer prices that you and I are paying at the shops is falling, let's have a look at what is happening to the prices of the things we dig out of the ground and sell to Chinese factories.

As you can see, it's not exactly flat (even if the last month did dip ever so slightly).

What this means is all those mining companies who earlier in the year were saying the arse was out of their pants and they were thisclose to needing to ring meals on wheels? Well you can stop praying to Mary McKillop, miracle number three has occurred - they're rolling in more money than ever before and laughing all the way to... err the bank.

Let's have a bit more of a look at how the mining boom is so wonderful that we have to pay higher mortgages:

The exchange rate has risen significantly this year, reflecting the high level of commodity prices and the respective outlooks for monetary policy in Australia and the major countries. This will assist, at the margin, in containing pressure on inflation.

The demand for labour has continued to firm. While the labour market is not as tight as in 2007 and 2008, some further strengthening would appear to be in prospect, judging by the trends in job vacancies. After the significant decline last year, growth in wages has picked up somewhat, as had been expected. Some further increase is likely over the coming year.

Firstly, God bless you PJK - if we still had a non-floating exchange rate inflation would be through the roof and so too would interest rates. The high dollar actually helps reduce inflation (can someone please send that line to Andrew Robb).

But mining companies are going to need labor, and while it ain't break the glass time, that skills shortage that Howard and Costello sat by and watched occur for 11 years is still with us, so in time we'll see people leave for the mines, meaning the supply of trained labor in the cities will become more scarce - which means of course labour gets more expensive - you have to pay more to keep guys from leaving for the mines, and because electricians etc know they are in short supply they can raise their prices because there is less chance you're going to be able to find someone else to do the job.

Don't you love supply and demand?

Here's how much fun this recovery is. Usually when you get a boom like this that leads to interest rate rises the Government will be able to help offset some of the rise because the increases in Company Tax revenue due to the boom would mean they can give us some income tax cuts or middle-class welfare (this is not actually a good thing economically, but it feels nice in the short term - Howard was very aware of this). But this time the Government won't do that because it is trying to get the budget back into surplus. The reason it is in a deficit in the first place is because it had to stimulate the economy while the industries like the mining industry went into massive decline which in turn meant that Company Tax revenue went through the floor.

Don't you just love the budget?

The good thing about this is if the Government maintains budgetary discipline throughout this boom. By the time they get the budget into surplus the economy will actually be in a much stronger and leaner state than it was when Howard and Costello were enjoying the first boom.

But that's for then. For now it just suck that we have to pay more each month.

So what impact will this have on the economy. Well obviously it will slow it - that's the whole point of interest rate rises. The reason the RBA increased the rates though was that they think the economy is pretty well powering along, and they expect inflation to go up next year - go up by more than they like. So instead of waiting for that to happen, which is what they did in 2007 (as Christopher Joye points out), they got in first this time. Their hope is by moving now it means they only need to touch the breaks rather than slam on them.


Given the US economy is still a basketcase and their Reserve Bank (the Federal Reserve) is printing money because it is worried about deflation it means our dollar is going to be above parity for a while.
So at least the interest rate rise which give you less money to spend will mean that you will (theoretically at least) need less money to buy those imported goods for Christmas.

Ah economics. Don't you just love it?
Posted by Greg Jericho at 8:02 PM

OK Ive calmed down a little from the anger I was feeling earlier due to the CBA. I am going to be philosophical and say we've enjoyed a good 6 months.
Joe Hockey "this shows the government has lost control of the economy" . Get a grip Joe.
Anyway the Americain election will be something worth watching tomorrow/ tonight

oh Sonia, that is a beautiful quote.

Yep CBA - bastards. But Westpac were bastards a while back. They seem to take it in turns...

Thankyou for another brilliant column as they all are.
So good to have you back, in fact fantastic.

Did Joe Hockey forget his hanky again, I didn't see him today.

Why is that every time I select my excerpt for "Todays Links" that I pick the wrong sentense.

Sorry Greg, but I know how particular you are, I am using the sentense, have corrected my copy.

Oh yeah, Americain won the Melbourne Cup because, like the Australian economy, it just keeps on winning. It's hot!

I think you mean "dig" not "did". Thanks for the article. So glad you are still hanging in the ether with us.

The American election is definitely going to shed some light on the future of the global economy. Even though President Obama has come under the lash recently, the Republicans have not proposed a realistic solution to the major problems either. I think the full recovery needs much more time and it is going to take a while before the budgets of various countries get into surplus, which certainly requires a number of necessary reforms to be put in place.

First property I bought the interest rate paid was 7 per cent. That was 50 years ago.
It would be good to be reminded every now and then just how interest rates have varied over the past 50 years.
Property is grossly inflated at present but people are still falling over themselves to purchase houses which are much bigger than they really need.
Why aren't politicians turning their attention to doing something about the capital gains being made on property and at the same time doing something about negative gearing. In my opinion that's what is scandalous, not interest rates.
It could be said that self-funded retirees have been underwriting homebuyers over the past while by accepting lower bank interest on savings and fewer, or no, dividends from money invested in superannuation funds and elsewhere.
As a shareholder in a Bank I cannot see why I should be expected to earn less a return than a shareholder in a mining company, an oil company or either of the big supermarkets.
Workers would not accept lower wages, so why should self-funded retirees continue to receive lower returns on investments?