Remember how during the election Mark Latham decided, as Mark Latham always does, that everything was about him? Remember how journalists started asking Julia Gillard about things Latham had said that were just his opinions and based on nothing but his conjecture? Isn’t it great to know that things have moved on…

Today Latham wrote his regular op-ed piece in the Australian Financial Review (by the way, it’s amazing how just because it’s in print it gets treated as though it is intelligent, whereas a rant on 60 Minutes is, well, a rant).  The headline was:

Wow. Guess he must know something. I guess he’s now back into the warm embrace of the ALP – you know, “Yeah don’t worry Mark we know you did all you could to sabotage our chances of winning the election. No hard feelings buddy. Hey by the way, we’re plotting to take down Julia”.

No sorry. It’s all based Latham reading stuff in the newspapers – oh and his absolutely one-of-a-kind level of bitterness insight. 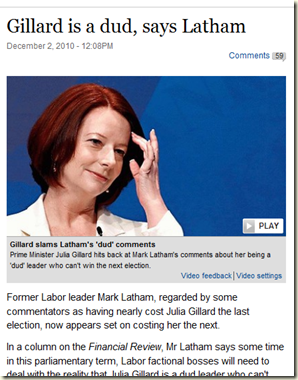 Look I think The Latham Diaries had its charms. The opening part was an excellent critique of the ALP. But as you read on more and more of it became points of self delusion and bile. Oh dear Matt Price says I have man-boobs, well what do you expect given when I took him to the cricket he didn’t want to drink in the outer like a real man, he’s just another one of those media bastards etc etc..

The further in time he gets from 2004, the deeper into the bile duct he goes. He was friends with Gillard. Since then he has written in the AFR of things she wrote to him in private emails. Ask yourself what you would think of a friend who did that? Would you consider them a person who when he writes of you that he is objective? Or would you think he is a bitter old sad man pining for the fact you won and that when the heat was put on him, he crumbled and was crushed by John Howard?

So what is he on about today?

“Some time this term of Parliament they [ALP factional bosses] will need to deal with the reality that Julia Gillard is a dud leader and cannot win the next election”.

Oh really? S0 that would be based on what?

Is it based on the fact that the last Newspoll had the ALP up 52-48 and Julia Gillard leading as Preferred PM 54-31.

Or is it based on the fact that her Satisfaction rating is at 46% and Dissatisfaction is at 37% (compared to Abbott’s 42, 45 respective ratings).

Or is it based on the the fact that she is such a dud leader that in the last week of parliament she was the one responsible for, in the opinion of the very Senator whose vote was crucial, saving the day, and getting the Bill passed that separates Telstra?  You know that reform that people had been wanting for about 20 years?

Yes, what an unwinnable dud she is.

Nope. Latham relies on the fact that Graham Richardson wrote a piece in The Australian and Mark Arbib came out in favour of Gay Marriage. He also suggests Gillard cancelled Arbib’s appearance on QANDA the Monday after the election as a pay back for a leak, not at all suggesting that maybe Gillard knew at that point she was doing all she could to woo the 3 independents, and trying to show them that the ALP was not going to fragment and that putting Arbib in front of a hostile audience asking about leaks and the sacking of Rudd and factional heavies was not going to be a good look.

She made a bloody good call that day, and it was only the ABC’s petulance at showing an empty chair that elevated the issue. But as Gillard is fond of saying: “scoreboard” – who is in Government now?

There would not be one member of the ALP who does not think Gillard is the reason they are in Government.

Even Latham understands that. He writes:

When Gillard signed an agreement with the independents to form a minority government, she not only kept Labor in office, she fire-walled her party leadership. If the ALP were to change leaders, the independents could legitimately say the agreement no longer applied, leaving them free to negotiate a minority Government with Tony Abbott.

Of course they would break off the agreement. There is not one soul in all of Canberra who doesn’t think so. But does this matter to Latham? Why no. After establishing that no change of leader could take place, he suggests that (wait for it), yes a change of leadership is going to take place. And yep, you guessed it, 37 year old Chris Bowen is going to be the one put up by the NSW Right to roll Gillard.

Yep. And how is this going to happen without the ALP being kicked out by the independent three?  Why because Bowen will “build a strong working relationship with the independents”

Please. Short of Tony Windsor adopting Bowen as his son, the independents couldn’t give a rat arse about how nice he was to work with. If he (or anyone) were to challenge Gillard, that’s it. Gone.

And every single person in politics with an IQ above room temperature knows this.

Latham hates Gillard more than poison. She is perhaps the only person in politics he hates as much as he does Rudd (one always hates more the former friend who has succeeded where you could not).

His argument may have had some shred of credibility if it were not the same line being pushed by the Liberal party (see Bolt on Insiders last weekend putting out suggestions that Gillard is in trouble). And putting up Bowen as the next guy? In ten years time, I’m with you. Now? He is 37 years old! Get in line, son.

But sigh, what did we see? Why the front page of The Australian's website for a good portion of the day running with:

Gee, what a shock.

Gillard herself was forced to respond to the article on 4BC.

Ah the media, good to see they’ve learned the lessons of the campaign – let a guy with a grudge make some comments then run with it.

I can’t wait for them to run the “Bowen rejects Mad nut who says there’s life on Mars”... though given NASA’s scheduled announcement tomorrow, maybe they will. 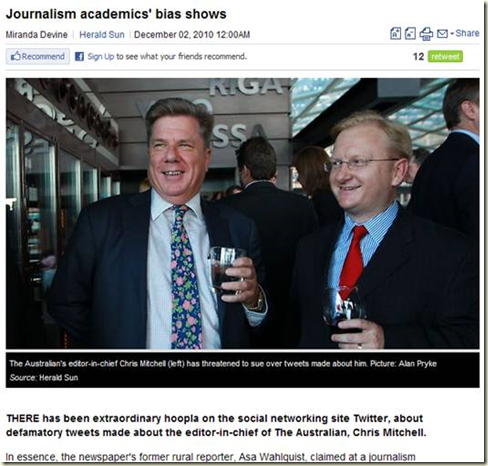 So as a bit of a follow up to Monday’s blog, my friend Julie Posetti was today served with a letter from the Editor in Chief of The Australian, demanding a retraction for tweeting comments made in a public forum some of which the letter admits were actually made. Now I don’t know much about defamation laws, but thankfully I don’t need to. You see Miranda Devine has taken all the guess work out of it. Never mind that lawyers are involved. Devine cleared it all up for us, writing:

There has been extraordinary hoopla on the social networking site Twitter, about defamatory tweets made about the editor-in-chief of The Australian, Chris Mitchell.

Hmm so they are “defamatory tweets” are they? Gee who needs courts, eh?

The sentence has now been amended to read:

THERE has been extraordinary hoopla on social networking site Twitter about allegedly defamatory tweets made about The Australian newspaper editor Chris Mitchell.

Ah, now they’re “allegedly”. Good to see. I guess, as editor of The Australian, Paul Whittaker, would say, “the article slipped through”.

News Corp in Australia more and more reminds me of those groups of girls in high school who spent their lives alternatively cajoling others to be "friends" or savagely attacking those who were seen aS inferior or outsiders.

I think it's high time for Latham to go back on his medication.

As for the Murdochracy, perhaps the government should take another look at media ownership in this country.

So THAT'S what Chris Mitchell looks like. And he runs the paper which had Nikki Savva's piece about the PM's personal appearance? I think he could do with some time in the gym.

Latham needs to get a life - he's wasted the one he's been in so far.

Just had another look at the photo of Mitchell, and marvelling how so much flesh can be contained in such thin skin.

I'm going to refrain from saying anything about Chris Mitchell on the grounds that it's the blogger, not the commenter, who will be gone after for defamation should the alleged defamee decide to do so. But regarding Miranda Devine, how was something like that possible? Can she have been a 'journalist' for all these years without realising the importance of the word 'allegedly', or did she do it on purpose? And either way, how appalling is that?

One political too many...

The tie says it all doesn't it?

"And every single person in politics with an IQ above room temperature knows this."

I am so gonna steal that one!

I feel a bit old when I read your post Grog - it was pretty transparent when they used her to lever Rudd out, that she was just a temp. I really thought she was too clever for that, but, in any event she was a good minister and will be again.

It was sad to see Rudd go that way and it won't be forgotten in a long while - they made her the face of that scandal, and as a woman, typically, "union powerbrokers" will inevitably consider her expendable, not unlike the way they came to view Rudd - they just used him as a conservative bridge to lever out Howard.

I thought Rudd/Gillard were a good team - both so different, they brought a lot to the leadership.

I clicked through to the MD link and the networked PC I'm currently at threw a "Block pr0nogr*phy!!" from the Net Nanny. Quite appropriate though. And serve me right for helping to increase that gherkin's page views.