Sorry all – family life interrupts. No blog tonight… err except this blog saying that there is no blog.

The Bushby saying “meow” to Wong thing in Senate Estimates was interesting but hardly needed a thorough going-over in Question Time by Tanya Plibersek. The media already had the vision and were going to run hard with it (it sure as hell negated any need on their part to listen to anything else said in the Estimates committee). And actually I don’t think Penny Wong needed any help. Her response to Bushby (and then to Brandis with his weak attempt to fudge the issue) was perfect:

She showed a hell of a lot more restraint than I would have.

Unfortunately what was missed in the focus on this was the Treasury – especially the Secretary Martin Parkinson and Head of Macroeconomics David Gruen – were adopting a very much more assertive approach than even seen by Ken Henry when he attended Estimate. Henry would often suggest his mirth at the idiocy of questions from Senators with a long pause and then a “I’m not sure that’s right Senator” type line. This morning Parkinson and Gruen would not let any off hand remark go through to the keeper.

Mathias Corman was given a lesson in economic modelling by Gruen, and Parkinson fairly well flew at Barnaby Joyce when Joyce rather idiotically suggested the National Accounts figures had been leaked because they were all in the newspapers (Joyce seemed not to grasp the difference between an economists estimate of the numbers and the actual numbers). Actually Joyce’s demeanour was just as disrespectful as Busbhy – but in some ways worse, because it displayed not just ignorance of how to act like an adult, but also ignorance of the law and basic economics.

When the Hansard comes out I might give it a bit deeper going over.

The GDP figures did come out, and yeah they were not great: 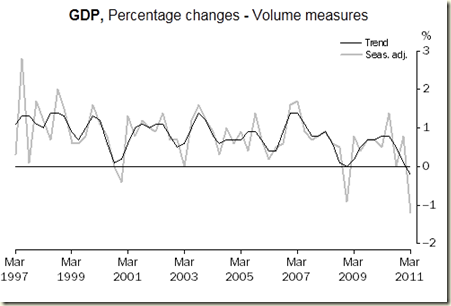 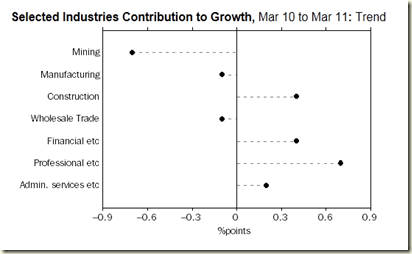 Yeah mining in QLD tanked due to the flood and Cyclone Yasi (and as an aside the contemptuous way Joyce in Estimates referred to the cyclone and the floods was fairly astonishing for a Senator of Queensland).

But worry not (well at least about GDP and the mining sector) because look at the terms of trade: 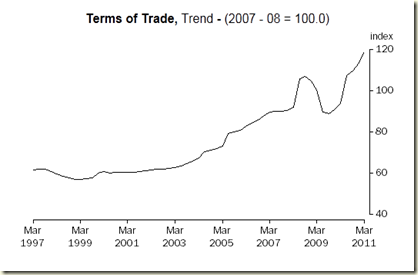 What does it mean for interest rates? The market did not exactly get scared by the figures.

There’s still more chance there won’t be a rise in the cash rate next week, but it is not beyond the realms of possibility (though I would bet against it – on the back of the GDP slump, I think a rate rise would not do wonders for consumer confidence – especially when you look at how much we are saving: 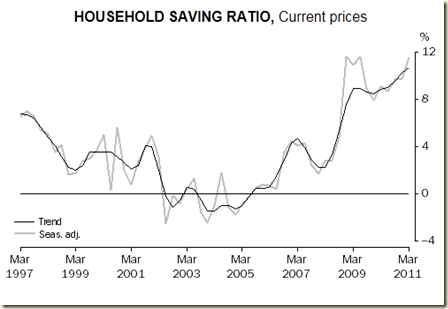 It looks like a lot of people are deleveraging (perhaps baby boomers plunging back into their super to make up for the wipe out in 2008-09), and also people not feeling the most safe about life. But the RBA will sit down and say – yeah we know there were floods and a cyclone, but geez, we’re still looking good. That fact is why nowhere will you read anyone talking about recessions today.

While we’re here, let’s see how that union-led wages breakout is going (you know the ones that we were told would kill the mining industry once WorkChoices was removed) 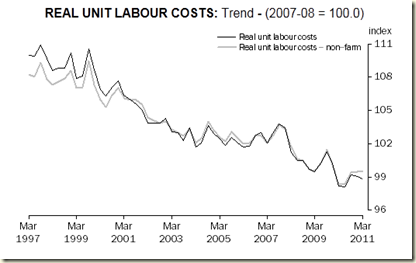 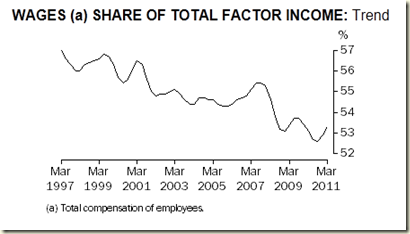 Hmm. Don’t you hate it when the facts don’t match your argument?

And as for Question Time? Let’s just say Harry Jenkins may have the confidence of the house, but he doesn’t have its respect.

And that is me not writing a blog.

Au Contraire, I thought it was delicious fun to watch the Liberal Party's Head Girl, Julie Bishop, defending Senator Bushpig's overt sexism towards Senator Wong. Gutless Abbott getting a Liberal woman to defend a Liberal man's sexism. How demeaning and sexist in itself. No wonder Bushpig thought he could get away with it, it probably goes on all the time behind closed doors in the Liberal Party Room. I'm also amazed no one else has picked up on Bushpig's covert slur directed at Sen Wong's lesbianism with his pussy meow. That's what disgusted me the most.

My sentiments exactly, Hilbilly Skeleton. Thanks.

I don't know if it was directed at her sexuality, as much as her sex.

Plibersek was fine, but thought she did over-egg it a tad. And I have to say I agree with those from the Lib side of things who throw back Julia calling Pyne a poodle, as opposed to the "pit bull" of Abbott.

The problem with Plibersek's attack is it led to the ABC radio leading with "Liberal's defend themselves against charges of sexism" and focused on that instead of leaving Bushby to wallow in his crapulence, and to have Abbott try his best to avoid having to defend him.

Thank you for not writing a blog ;) I miss your blog when you *really* don't write one!

"Actually Joyce’s demeanour was just as disrespectful as Busbhy – but in some ways worse, because it displayed not just ignorance of how to act like an adult, but also ignorance of the law and basic economics".

Barnyard showed ignorance of most things on Lateline tonight. He came across as a real dill.

A quip attributed to a US College basketball coach seems apt. He said, "These rookies not only seem to know nothing, they don't even suspect anything!". That was true of Barnyard tonight. Coalition minders must have been writhing in despair at his performance.

It is every woman's right to respond as Plibersek did especially when someone as respectable as Wong is treated so badly. This is no joke,this chauvanism that is accepted by many in our society. It is disempowering to all females including our female children many of whom look up to Wong.
It leads to gross abuse of women and children and for a senator in the Parliament in Estimates to behave like that, how far will these people go to gain power.
Will they ruin our social fabric.
Have they ruined Harry Jenkins.

Interesting that you thought the media would not go the "recession" route. See if you can find at least a transcript of the first five minutes of Ch 9 Sydney's evening news! If the RBA need to be concerned about consumer confidence the ridiculous "We will all be murdered in our beds" approach to blow the story out of proportion does not help. And what would a recession scare be without some Keating "the recession we had to have" footage. Both 9 and 7 went with that.

As to Bushby I was as much irritated by Abbott's unwillingness to pin him, even in a minor way, as by Bushby's original comment. Most of the sexist slurs I dealt with in the early part of my career were met with silent smirks by the more senior males around when they were made. The poodle references are not appropriate but that does not excuse Bushby or Abbott.
Cat (irony noted).

Just a quick plug for the economist mag review of Aust this issue. Great country, fine people, brilliant economy, cr@p politicians. Says it all really when we live in a small puddle we think a stone is a mountain.

Love the non-blog, was hoping to see some analysis of the speaker issue. Your comments the other day were very interesting (guess I have no life).

What's your source for labour/wages costs?

I'm not disputing them, just keen to know.

I think First Dog on the Moon captured this week in Parliament beautifully.