And so tomorrow night begins in my house the annual, we’re not going to get as much sleep as we planned fortnight, for Wimbledon is here again.

My memories of Wimbledon growing up are stronger than those of the Australian Open. I can remember being allowed at the age of 9 to stay up and watch Borg play McEnroe in the 1981 final. I wouldn’t be able to tell you who won the Australian Open that year without first having a squiz at Wikipedia (it was Johan Kreik).

This is due to the fact that even from a young age I had a deep sense of embarrassment about the Australian Open when it was held at Kooyong. I wrote about this a while ago so I won’t revisit again suffice to say that the 1981 men Wimbledon’s Final is an all time classic, and the Australian men’s final was between Johan Kreik and Steve Denton. 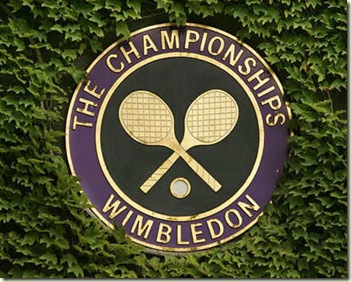 The thing about Wimbledon is that much like the US Masters Golf at Augusta National it somewhat irks my egalitarian sensibilities – the Royal box, the wearing of white, the bloody Kipling poem above the door (please John Newcombe, don’t read it out to us again, we get it – you’re inspired by it). But all that doesn’t matter – it’s Wimbledon. Sure it’s so full of snobbery that you fancy that if you spent too many days there you’d walk out of the ground with a new surname that ends with hyphen Smyth and a wife suddenly calling herself Lady Felicity, but somehow you don’t care – mostly because there is just something special about it – and maybe it is the snobbery.

There must be something about Wimbledon, because why else would European player like Becker, Lendl, Federer who would have grown up on clay and hard court have this insane devotion to the tournament? Poor Lendl drove himself to such distraction over the event that a guy with an amazing serve and forehand tried to volley in order to win it (note – he was born 20 years too early – Lendl would have won a heap of Wimbledons if he played in this era).

There must be something about Wimbledon to have people staying up past midnight watching each year. Thankfully this year the tournament is being telecast by Channel 7 who are making use of their digital channels to have coverage starting when play starts each day. No longer will we have to put up with Channel Nine treating viewers like scum and not showing the tennis until after some re-run of CSI Miami.

Is the special thing about Wimbledon the lawn? For me it is. Growing up in the country I was fortunate enough to have a lawn tennis court in our backyard. I think I was a 30 per cent better player on lawn than I was on hard-court. I loved diving for volleys, loved how a backspin backhand could just skid through, loved the smell of the freshly cut lawn (which had been freshly cut by me – it was one of my chores). And now as a pretty avid watcher of tennis on Foxtel the love of grass remains. It is the visceral sense you get when you switch on the TV and instead of them running around on the blue hard courts or the red clay, you see that wonderful green surface. It feels like real tennis.

It even sounds like real tennis. There is no squeaking of shoes like on hard court. There’s no thwacking of racquets on the bottom of shoes to get rid of clay stuck in the soles. All there is is that pure sound of the tennis ball hitting the racquet (oh yeah, and the grunting…)

And even though it is only 3-4 weeks each year that grass rules, that has not caused Wimbledon to decline in anyway. It is not a tournament won by lucky players who only thrive on grass – here’s the list of those who have won the title this century:

No stragglers in either list. You win here, you can discount luck.

In the women’s game this is even more exacerbated where you don’t even need to be a great server (because well, holding your serve in women’s tennis seems to be an achievement in itself).

To pick the winner this year from the women’s draw is nigh on impossible. Serena and Venus Williams are back from long lay-offs with injuries (a year in the case of Serena). Had Serena been playing regularly you would have her as the favourite, but she is very rusty – she got knocked out in the second round of the Eastbourne tournament last week (admittedly by Vera Zonerava). The other issue is that Venus is now 31 and Serena is 30 in September, and well, time waits for no one. Sure 2-3 years ago they could swan around the tour each year and just get excited for the Grand Slams, but the days are tougher now.

I think any of the top 10 seeds can win it. I am not a huge watcher of Women’s tennis, so my tip is much more speculative, but given her strong performance at the French Open, I’m going to tip Maria Sharapova here. This is not good for Sam Stosur who is scheduled to meet her in the 4th round. Stosur, with her great serve, should love Wimbledon. The only problem is when it really gets down to the nitty gritty, her serve is not always so great.

The men’s event? Forget anyone not in the top 4. It is Nadal, Djokovic, Federer or Murray. The rest are playing to hopefully get to a semi final, but in all likelihood to make up the number in the quarter finals.

Of the Top 4, Nadal is due to meet Thomas Berdych in the quarters. Berdych lost to Nadal in last year’s final in straight sets. I would expect the same here. Djokovic looks likely to meet Soderling. That is a tough ask, and in any other year I would give Soderling a big chance. But this year Djokovic is at another level, and it is not a level Soderling can reach. Federer is set to meet Djokovic in the semi, but before then he will probably meet David Ferrer of Jo-Wilfried Tsonga. Tsonga looks like a guy who should play grass well but he has only made the Quarter Finals once. And the last of the top four, Andy Murray is due to meet Andy Roddick or Gail Monfils in the Quarter Finals. Based on how he dealt with Roddick at Queens last week, he should get though to meet Nadal in the semi.

But this year’s tournament has an added aspect. Since 2 February 2004 either Federer or Nadal have been Number 1 – that’s 387 weeks. How long is that? The next longest streak by two players Jimmy Connors and Bjorn Borg who from 29 July 1974 to 2 March 1980 held the number one spot for 292 weeks – or 95 weeks shorter than the Fed-Nadal streak.

How long have these two players been at the top? Here’s the Top 10 prior to Federer taking over in February 2004:

Yep the tennis world has changed a bit since then.

But this tournament is a big chance to see a change, and Novak Djokovic could become the 25th Number One male tennis player of the Open era.

Given the way the tennis rankings work where points last for 12 months, currently Nadal is on 12,070 points to Djokovic’s 12,005. But as they lose the points they won at last year’s Wimbledon once this event finishes, the more accurate way to see where things are at is to take away the points they won last year.

Last year Nadal won and so he loses the 2,000 points he won for that taking him back to 10,070 points. Djokovic on the other hand only reached the semi-final and so he only loses 720 points, meaning he is sitting on 11,285.

If Djokovic gets to the final he will be number one even if Nadal beats him.

Below is the breakdown of points for the top 4 players – with the score they will be on if they reach certain rounds.

As you can see Federer is small chance to move up to Number 2 and no chance to fall to Number 4. Even if he loses in the first round and Murray wins the whole thing, Murray will still be 735 points behind Federer. If Federer wins the thing, he would need Nadal to lose in the Semi (or worse) for him to go above Nadal (ie Federer would be the new number 2 and Nadal number 3).

So if you are a Djokovic or Federer fan you’ll be cheering for Murray to take out Nadal in the semis.

If you are just a tennis/sports fan, it won’t matter too much, because if these four get to the semi-finals, you know you’re going to see three amazing games of tennis (the two semis and the final). And also by that stage, you’ll be sleep deprived.

But hey, it’s Wimbledon. It’s worth it.

Only you could get me to read a blog post about Wimbledon - I hate tennis.

growing up, it was just tennis, irrespective of the surface - was lucky to have an en tous cas in the back yard

most mornings before school I was out serving dozens of balls from north to south and back again - on weekends a neighbour used to ask over the fence "are you Margaret or Evonne?" - meaning, who was my hero!

I was a teenager when Evonne won Wimbledon - memories on several counts that are beyond measure :)

Yep, Wimbledon is something special. You seem though to have made a mistake with the female champions over last 11 years (your omission of the obvious Venus Williams sent me to Wikipedia to verify). The list should be:

Ah thanks Simon - my mistake - I was looking at the French Open page on Wikipedia (have fixed now).

How did you know my wife started calling herself Lady Felicity. It's uncanny!

Ah Evonne, the most graceful player ever. This year in the womens I'll be going for Li Na, just love watching her play. In the mens, the highlight for me will be if Federer gets into the final and he comes out in fancy dress again for the coin toss and carry on.

Gordicans - agreed I like watching Li Na as well

Perhaps the Speaker could try "Quiet please" instead of "Order!" - but Abbott doesn't strike me as being a tennis fan. (John Alexander can explain it to him.)

If JA does give Dr No some tennis info. it will be the first thing of any note he will have done since he was elected. (Not counting his "interview" Alan Jones where I swear his trousers must have been soaking wet after what the Parrot did in his pocket.)
Yes Greg, we are like you, getting ready for the big fortnight. We had a good training run through the French Open and are fit and ready to go!!!!

Speaking of Lendl, the yarn I heard years ago was that apparantly he'd wander around the dressing room wearing nothing but a towel around his neck to intimidate his apponents!

Tsonga is best by far on hard courts; it's been some time since Wimbledon was won by a serve-and-volley merchant like him.