CPI: Inflation up 1.4% in the September Quarter

And so the first lot of inflation figures since the introduction of the carbon price came out today, showing in the September quarter inflation had gone up 1.4%, for an annual rise of 2.0%. In seasonally adjusted terms it was even better – a 1.2% quarterly rise, with the same 2.0% annual rise.

Now normally figures showing a mere 2.0% annual inflation would have people laughing in the streets about the wonderful low price rising country we live in, but because of the carbon price these figures have caused many to scratch their chins and mutter “hmmm…”

First off let’s get some perspective:

Sure it’s 63 year’s worth of perspective, but I just want to reassure you all that we’re not exactly in hyperinflation territory. In fact we’re still at 2.0% right at the bottom of the RBA’s target of 2-3%. THE BOTTOM

So maybe we need a bit of a grip when we read thing like this from the Liberal Party:

These figures clearly show the impact the Carbon Tax is having on everyone across Australia.  The  things people need most like electricity, gas, education, rent, childcare and water are rising hitting the hip pockets of families, businesses, seniors and pensioners.

Now the Liberal Party is right (in part) when it talks about the rise in electricity prices (I’ll get to those later), but when it starts talking about “things people need”, well it’s not really being specific because the CPI covers the whole gamut (if you will) of things we need. And that whole gamut says annual inflation rose 2.0% over the past year – that’s a figure worth celebrating.

Let’s look closer – first the annual rate of the CPI over the past 7 years:

And now the quarterly changes over the same period (seasonally adjusted): 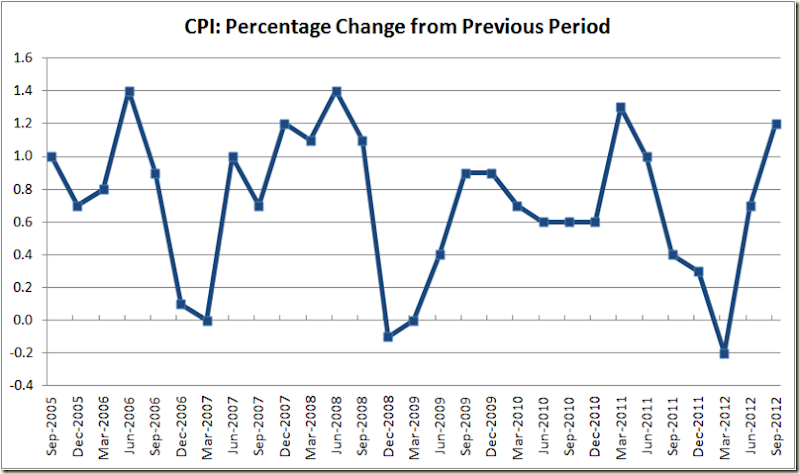 So annually things are fine but yep a big jump in the last quarter. And of course the carbon price is to blame. Treasury had predicted a hit of 0.7% due to the carbon price. Take that out and we’re back at either 0.7% non adjusted or 0.5% seasonally adjusted – or once again in very low inflation territory.

The big jump was in electricity (15.3%), gas and other household fuels (14.2%). Clearly these jumps were going to happen due to the impact of the carbon price. But how much? If you’re Joe Hockey, you’ll lay it all on the carbon price:

The ABS has found the largest price increases since the last CPI figures were released were electricity prices which have seen a 15.3% rise with household gas and miscellaneous fuels seeing a 14.2% rise.

Well yes that is true: 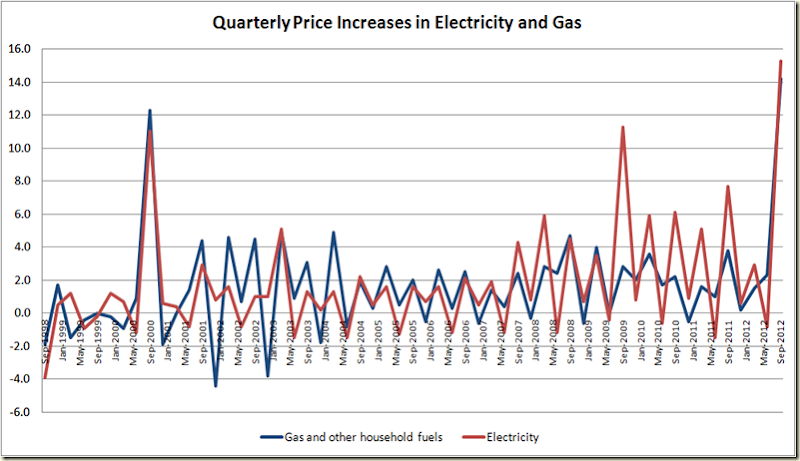 But first we need to realise that this was not a shock – in fact in June it was announced that NSW electricity prices would increase by around 18%, and gas prices would go up by between 9% and 15%. So there’s no surprise to any of this.

And remember as well that when those increases were announced only around 49% of that 18% rise was attributed to the carbon tax.

Some commentators have made a big deal about the rise for electricity being 15.3% when the Treasury (beware big pdf file) had suggested the one off hit from the carbon price would only be 10% for electricity and 9% for gas. But given 49% of 15.3% is around 7.5%, you could suggest that Treasury was overly cautious.

But one thing about the ABS data on sub groups such as these is that it is not seasonally adjusted – and the September quarter is often the biggest quarterly jump in price of the year (and the June one usually the smallest). Possum noted on Twitter that one way to look through the massive ups and downs of the original unadjusted data was to compare the increase in electricity prices in previous September quarter to gauge what we would normally expect such rises to be:

Bear in mind this is a very unscientific way to examine the impact of the carbon price – and we’ll need to look at the next couple quarters to get a fuller picture, but it gives at least some sense of the picture. I wouldn’t bother doing it for all areas – eg fruit and vegetable where there are so many other variables at play – namely the weather.

But let’s get down to what everyone really care about inflation – the impact on interest rates. 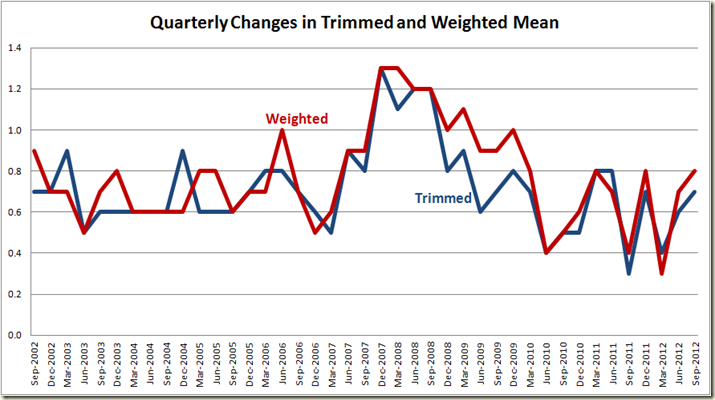 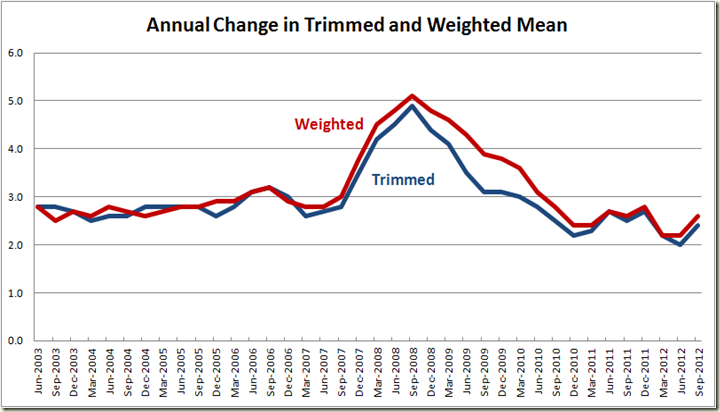 or for a close look – the past 2 years only: 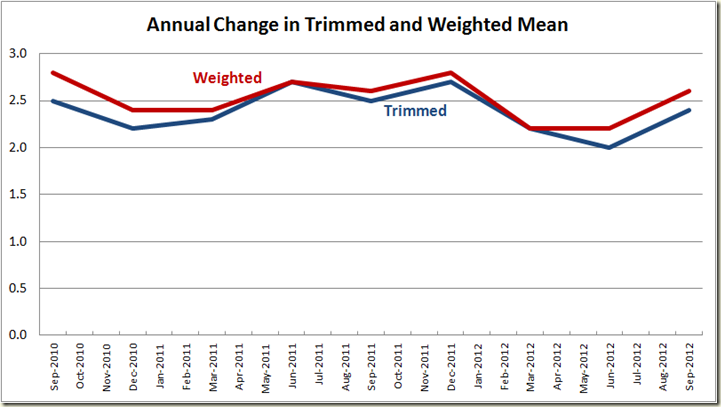 Given these are the measures the RBA focuses on, there’s not a lot here to suggest we need to panic about inflation.

The only aspect I think that might get the RBA to pause and not cut rates on Cup Day is that given the past 6 months has seen a combined 1.5% increase in the weighted median and a 1.3% rise in the trimmed mean the RBA might think that annualizes out to around the 3.0% – ie a the top on the band and thus decide it is best to wait and see what the December quarter holds before cutting the rates. But the market doesn’t seem to think that is likely – the expectation is still for a cut

On a broader look, the old Misery Index of the Unemployment Rate and Inflation rate added together shows we’re still in very good territory historically (I use the trimmed mean for inflation) 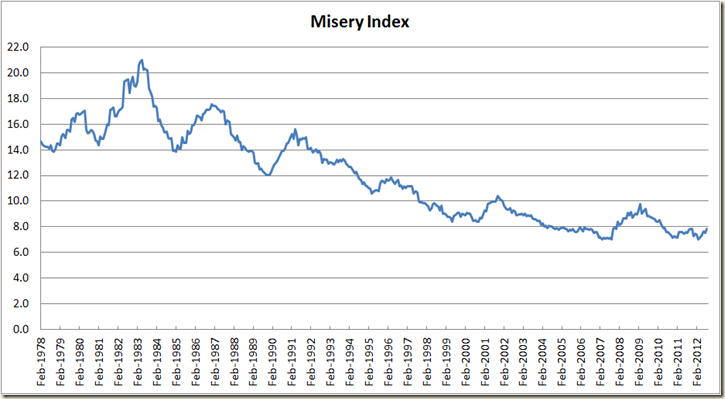 The level at the moment is 7.8, and as you can see, being under 8 is pretty much an anomaly. We are experiencing odd low unemployment and low inflation at the same time. With unemployment expected to tick up slightly, right now I’m still betting the RBA will drop rates in November.

But then I rarely get things right on Cup Day…