Today the RBA cut the cash rate by 25 basis points taking it to 3.25% a mere 25 basis points above the break glass in case of emergency level of 3.0% that was reached during the Global Financial Crisis. 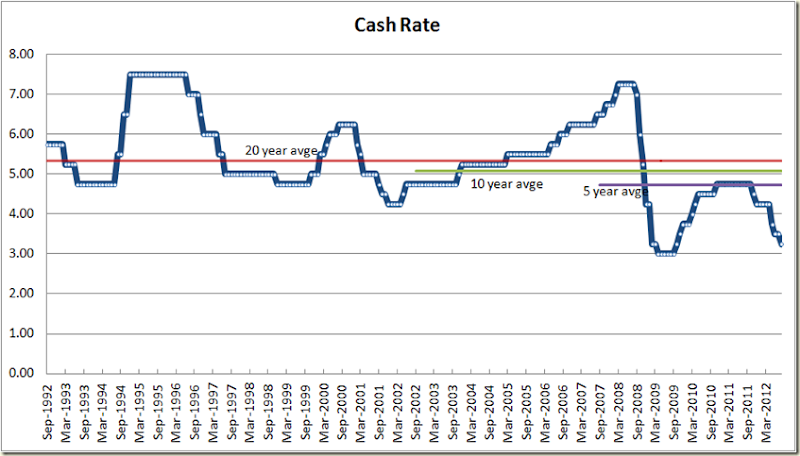 Of course the key is what will the banks do. The Bank of Queensland dropped its rate first by just 20 basis points. SO if we are conservative and assume the major ones will do the same, that will lead to a standard variable mortgage rate of 6.65%, below the 20 year average of 7.74%, the 10 years average of 7.36% and the five year average of 7.49% 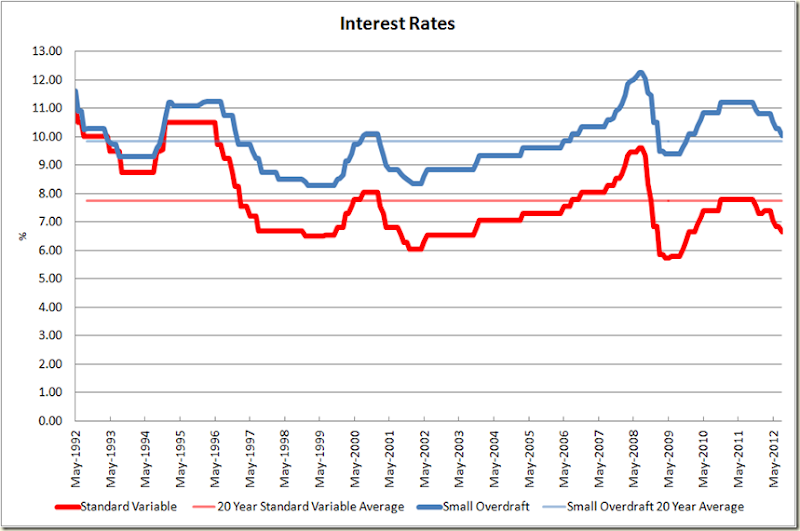 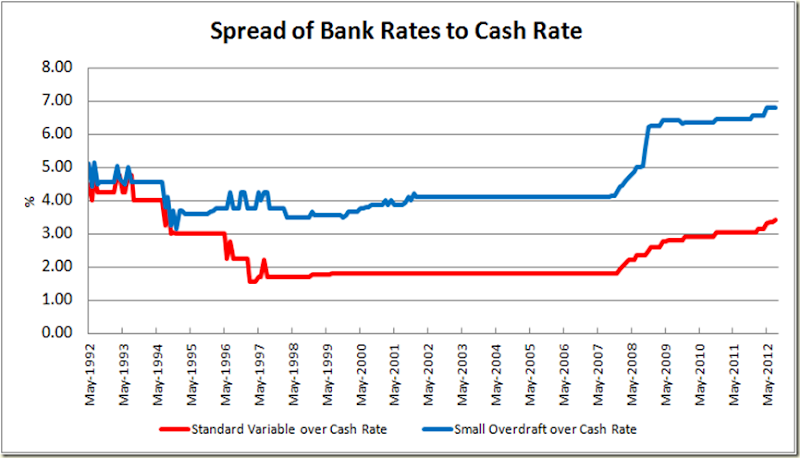 Thus the low rate now is unlikely to have the stimulatory effect it had back then, and could even go lower. The Cash Rate going below 3% is a distinct possibility.

So why did the RBA drop rates? Well the statement by the Governor gives us the main idea right up front:

The outlook for growth in the world economy has softened over recent months, with estimates for global GDP being edged down, and risks to the outlook still seen to be on the downside. Economic activity in Europe is contracting, while growth in the United States remains modest. Growth in China has also slowed, and uncertainty about near-term prospects is greater than it was some months ago. Around Asia generally, growth is being dampened by the more moderate Chinese expansion and the weakness in Europe.

So blame the Northern Hemisphere (or thank them fi you like that lower mortgage rate).

The bank also gave a rathe nice slap to all those who have been banging on and on about the Government “crowding out” commercial lenders – such as Joe Hockey who in April said in speech:

Low appetite for risk has seen long-term interest rates faced by highly rated sovereigns, including Australia, remain at exceptionally low levels. Nonetheless, capital markets remain open to corporations and well-rated banks, and Australian banks have had no difficulty accessing funding, including on an unsecured basis.

Ahh well, it was a nice line, Joe.

Closer to home the impact of the Northern Hemisphere was observed with commodity prices:

Key commodity prices for Australia remain significantly lower than earlier in the year, even though some have regained some ground in recent weeks.

The RBA also today released its index of commodity prices, which noted:

Preliminary estimates for September indicate that the index fell by 1.3 per cent (on a monthly average basis) in SDR terms, after falling by 2.8 per cent in August (revised). The largest contributors to the fall in September were declines in the prices of iron ore, coal and oil, which were partly offset by increases in the prices of gold and aluminium. The prices of rural commodities also declined. In Australian dollar terms, the index rose by 0.9 per cent in September.

A look at the Index of Commodity prices in $A and $US terms shows the Aussie dollar remain massively over valued: 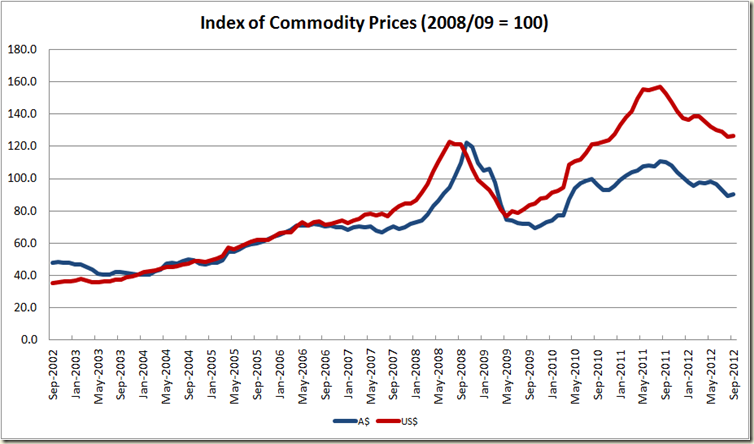 One aspect the RBA will be hoping will occur as a result of this decision is for the Australian dollar to depreciate, as it noted:

… exchange rate has remained higher than might have been expected, given the observed decline in export prices and the weaker global outlook.

The dollar did drop around a cent and half today to $US1.0305 so it might do the trick…. 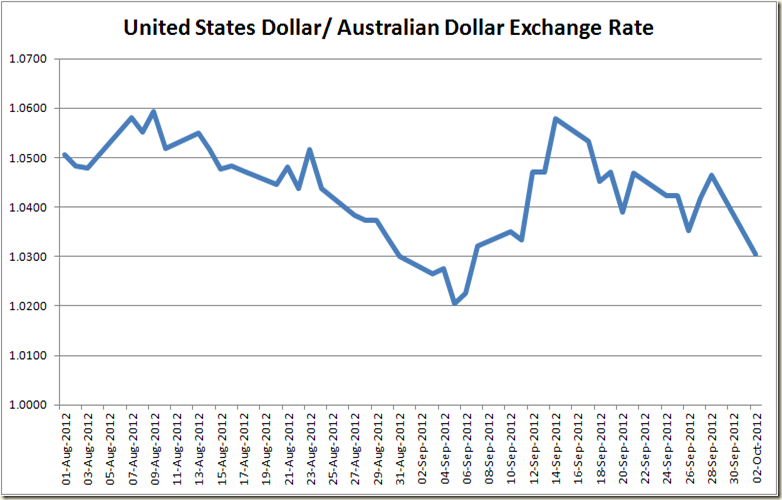 Of course if the dollar does depreciate that will have an inflationary aspect. But I get the feeling at the moment, the RBA is not too worried about inflation.

The Bank's assessment remains, at this point, that inflation will be consistent with the target over the next one to two years.

The RBA also noted in its rates decision the domestic economic conditions. They certainly are not panic stations:

In Australia, most indicators available for this meeting suggest that growth has been running close to trend, led by very large increases in capital spending in the resources sector.

So “close to trend” (this aspect is why some rates “hawks” are wondering why the RBA is cutting rates). It goes on:

Consumption growth was quite firm in the first half of 2012, though some of that strength was temporary. Investment in dwellings has remained subdued, though there have been some tentative signs of improvement, while non-residential building investment has also remained weak. Looking ahead, the peak in resource investment is likely to occur next year, and may be at a lower level than earlier expected. As this peak approaches it will be important that the forecast strengthening in some other components of demand starts to occur.

The RBA here is signalling a peak in the mining boom. That doesn’t mean the boom will be over – investment won’t just end, and hopefully the decline will be long and slow.

It then gives perhaps the key domestic reason why it cut rates:

Labour market data have shown moderate employment growth and the rate of unemployment has thus far remained low. The Bank's assessment, though, is that the labour market has generally softened somewhat in recent months.

This is no shock – in fact I said as much last month when the August employment data came out: 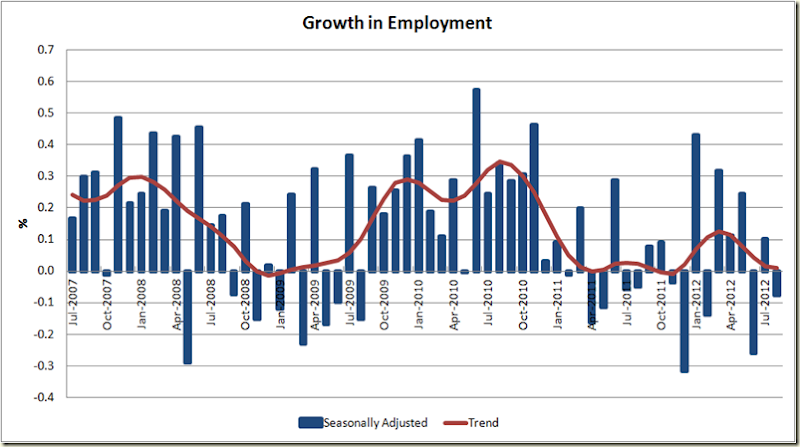 At today's meeting, the Board judged that, on the back of international developments, the growth outlook for next year looked a little weaker, while inflation was expected to be consistent with the target. The Board therefore decided that it was appropriate for the stance of monetary policy to be a little more accommodative.

To me that “a little more” suggests they’re not likely to cut rates again in November (on Melbourne Cup Day). It suggests at the moment they’re tweaking more than diving straight in and performing major surgery.

ABC journalist Michael Janda noted that for the first time this year the RBA didn’t mention housing prices. In the past it usually says something like this (as it did last month):

As a result of the sequence of earlier decisions, interest rates for borrowers are a little below their medium-term averages. The impact of those changes is still working its way through the economy, but dwelling prices have firmed a little and business credit has picked up this year. The exchange rate has declined over the past month or two, though it has remained higher than might have been expected, given the observed decline in export prices and the weaker global outlook.

This time it merely stated:

Interest rates for borrowers have for some months been a little below their medium-term averages. There are tentative signs of this starting to have some of the expected effects, though the impact of monetary policy changes takes some time to work through the economy. However, credit growth has softened of late and the exchange rate has remained higher than might have been expected, given the observed decline in export prices and the weaker global outlook.

Given housing prices have continued to firm in the past month the absence of mention suggests the RBA is more worried about business credit and the exchange rate than it is housing prices.

Having read this I thought it was very informative. I appreciate you taking the time and effort to put this article together. I once again find myself spending way to much time both reading and commenting.
Best Home Loan Rates