ELECTION NOW!!! or in September if that’s your thing…

And so today at the end of a very good speech, the contents of which have now been forgotten by everyone, Julia Gillard announced that the election will be held on September 14. Oh and she has new glasses.

This has pretty much turned everything on its head as prior to her announcement everyone was expecting the election to be held in errr…. September… or possibly October.

On a practical level it’s great for the Public Service. Everyone will be able to schedule their holidays now. On the down side, that ready at hand stalling excuse of the APS in election years of “Well we probably shouldn’t start this project because they might call an election” is now sadly redundant.

There’s been a lot (oh. my. god. a lot) of talk in the past 8 hours about how this will be the longest election campaign.

Please. The Liberals have been campaigning since about 22 August 2010 – Tony Abbott had already announced a “mini-campaign” for this week – which might possibly be the single most superfluous announcement he’s ever made.

The government as well has spent far too much time in campaign mode, and only one the carbon price was locked in last year did they start acting like a government.

Rather oddly the announcement of an election date has caused the media to go into apoplexy with talk of uncharted waters and (oh. my. god) it’ll be an 8 month campaign!! How will we cope!!!. It’s almost like they don’t realise pretty much all the states except Queensland have fixed terms. How do those people in those states survive living in such a bizarro world? 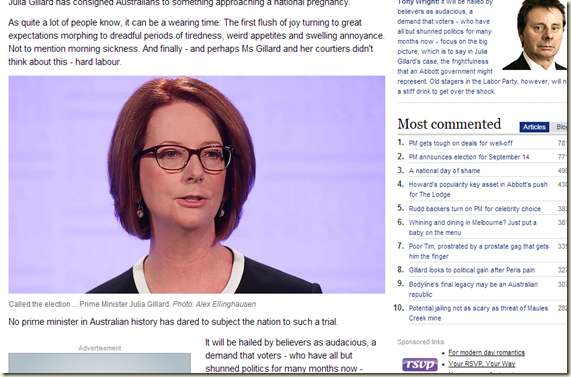 The reality is that we will have a long campaign, but not because the date was announced now. The election is to be on September 14. The last sitting day of parliament prior to that date is June 27.  Usually after the end of the winter sitting period, having passed the budget and indulged in the press galleries mid-winter ball, MPs fly off overseas for “USA-Australia” conferences and the like. Mostly politics goes off the boil for a few weeks. Not this year.

Who wants to go on an overseas jaunt when your opponent will be doorknocking in your constituency?

So that is ELEVEN weeks from the last sitting day till the election.

Now sure, the writs won’t be issued until August 12, so the Government will still keep governing, but in reality the campaign will have begun. The trick for both sides is how to pace themselves. No one wants 11 weeks of TV adverts, and I doubt either side could afford them – the ALP sure as hell couldn’t.

Similarly, the campaign bus won’t actually start till the official campaign does, so from 27 June till 12 August we’re going to a have a six week phoney campaign where every one will know the election is coming, everyone will know there’s no new legislation to be passed or even debated. That’s a hell of a lot of space to fill with some kind of substance, but not so much substance that you have nothing left to say in the actual campaign.

I suspect both sides will be looking at how the Americans do it because they have around 8-9 weeks from the party conventions until the Presidential election, and that’s the kind of real time frame we’re talking here – not 8 months.

This gap is why I had been thinking 11 October, because then parliament could have sat until August 29, and the PM could announce the election prior to the September sitting weeks.

But that’s all moot now, and as a fan of fixed elections, I think this is an excellent decision.

The other “big” thing has been that 14 September is Yom Kippur.

My favourite aspect of this is the big outrage from everyone except the leaders of the Jewish community. As news.com.au even reported:

But director of the Executive Council of Australian Jewry, Peter Wertheim, says the majority of Australia's 107,000 Jews would not be fussed about the date.

"To be absolutely truthful it is not a major issue for us, because every election takes place on the Jewish Sabbath," Mr Wertheim told news.com.au.

“Not a major issue” but you know, let’s pretend it is one.  It’s January 30 and already the bullsh*t scale of media political coverage has zoomed past that of 2012. Pace yourselves people, pace yourselves. At this rate there’ll be nothing left to beat-up come September. Oh who am I kidding. Of course there will be.

Look, we don’t have elections over Easter or on Christmas Day not because that would be a great slur on Christians but because it would be a complete chaos. People over Easter and Christmas on masse go away for holidays, and as a rule you want to hold elections on weekends in which people are not likely to be away from home. It’s the same reason they’re never held on the Queens Birthday or Labour Day etc.

We can’t hold an election because of a religion practised by about 0.5% of the population? And we’re not allowed to do that even though it will not actually stop those people from voting?

Surely there are enough real things to get worked up about than these faux outrages where no one is actually all that outraged.

So is this a political masterstroke? Well I don’t know. And neither does anyone else. It won’t stop many though from pontificating about it. The old adage is the government has a big advantage knowing when the election will be called. But this year because an early election would’ve meant a house only one, and because the ALP is behind in the polls, it was always going to be September-October (possibly November but that’d be a stretch).

So I don’t think loses much of a tactical advantage on that score.

The PM in her speech said:

But the benefit of fixing the date now is not just the end of speculation about election timing.

It gives shape and order to the year and enables it to be one not of fevered campaigning, but of cool and reasoned deliberation.

That sounds nice. But based on the past 8 hours, the signs ain’t good.

I am just wondering the announcement has had the affect of fixing TA as LNP leader. Now the date is known does this prevent a change to someone considered more palatable?

I think in a week or so the "Oh wow we know the election date" will subside and the usual politcking will happen again.

I see no reason why either Abbott or Gillard could not be dumped between now and August.

For all the talk about this being the longest election, people only really think it's an election when the adverts start and all the other usual trappings begin.

This is a big deal today, but I don;t think it puts anything off the table in terms of what the parties might do

Uncharted, not unchartered, unless of course you own the boat, or stole it.

I can't believe most of the commentary I've heard today has been about the PM's glasses, her so called, new look (oh, she must've hired a stylist) and the boldness of calling the election on Sept 14!!! Shock horror!

She always said the government would run it's full term, so where is the surprise element in her announcement?
Oh, that's right, it's the Canberra press gallery and tabloids we're dealing with.
Forgot myself there for a moment.

Most states have fixed terms, what is the point of this carry on by our worthless media who learn nothing.

thanks pedant - will fix!

It gives shape and order to the year and enables it to be one not of fevered campaigning, but of cool and reasoned deliberation."

Hee, hee, sure does: for Tony Abbott and his band of merry men (and a few women).

Even without the events of the first 48 hours of the world's longest election campaigns (ever!) - and hey, another senator lost! - this was merely another mind-numbingly piece of data in the large collection of "Julia has no judgement, doesn't follow any process if self interest is at stake, is a bit batso, possibly insane, erratic, doesn't consult her own cabinet ... ".

Who would have thought it would turn out like this!

An observation was made elsewhere (sorry - source amnesia) that if Gillard is re-elected, News Ltd will end up looking mostly powerless within Australian politics.

So some of the furore on the media's side is partly blood-in-the-water and partly desperation. We've had an incredibly effective Parliament for one that is a) hung and b) saddled with some of the scandals it has been. The economy is good and, if you look at the rest of the world, even exceptional. Yet this election campaign won't be about that in the media's eyes; it'll be about much more petty things, like if Gillard's glasses make her look too masculine.

Gillard won't be re-elected, so any thoughts that News Ltd will be a lame duck is nothing more than wishful thinking, also a singular failure to understand why News Ltd exists. Last time I checked, it's a profit making, private sector business.

The myth of Gillard doing a stunning job with a minority government is tired and should be put down. It's not the first, but is the worst, "hung" state or federal government the country has seen - others have managed without the dirty individually self-serving deals.

Michael Danby won"t be campaigning for his own Job because of his religious beliefs.....

Try web elections, I read in an articles that its gonna be more accurate. I still wondering how it goes!

Election in the Philippines
by Inquirer