Australia’s March Inflation – Down Down, Prices are Down…..

The CPI figures for the March quarter were released today by the ABS, showing a next to nothing change of 0.1% in seasonally adjusted terms (0.4% in the original data, if you like that sort of thing). This means in annual terms the rise was 2.5% or smack bang right in the middle of the RBA’s 2-3% band. 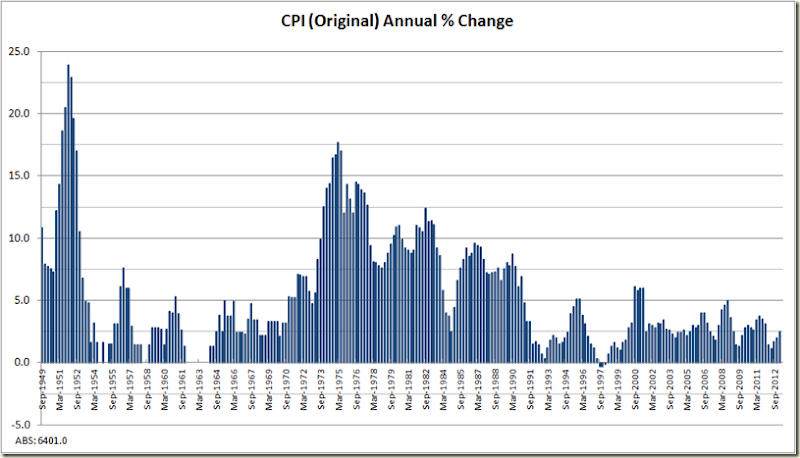 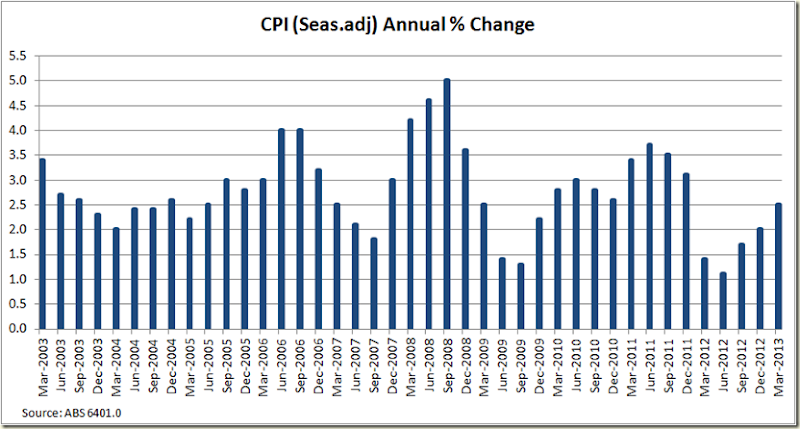 It’s worth noting that the average inflation in that time is 2.8%, and if we go back 20 years it is 2.7%. So prices are increases slower than average. But it’s not surprising that the annual rate increased over the last period because the last period included the March 2012 quarter which actually had negative growth – ie deflation.

Even still, in quarterly changes it is a mere 0.1% which looks like this: 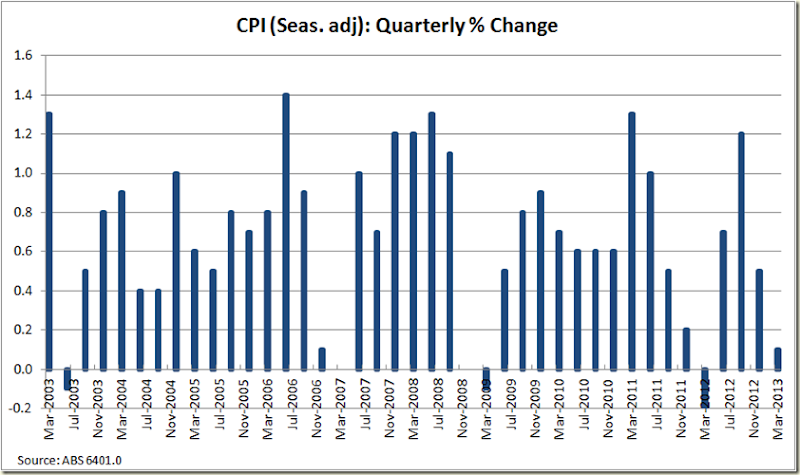 Now we all know the Reserve Bank looks at the Weighted Median and Trimmed Mean versions, so how do they look? 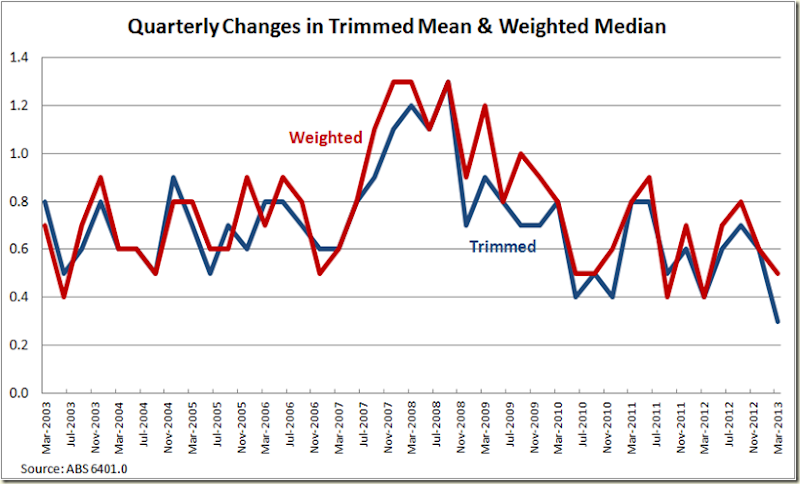 Again even though the quarterly changes are rather sharp and jagged, you can still see how low inflation is running.

The picture becomes even clearer when we go to the annual growth: 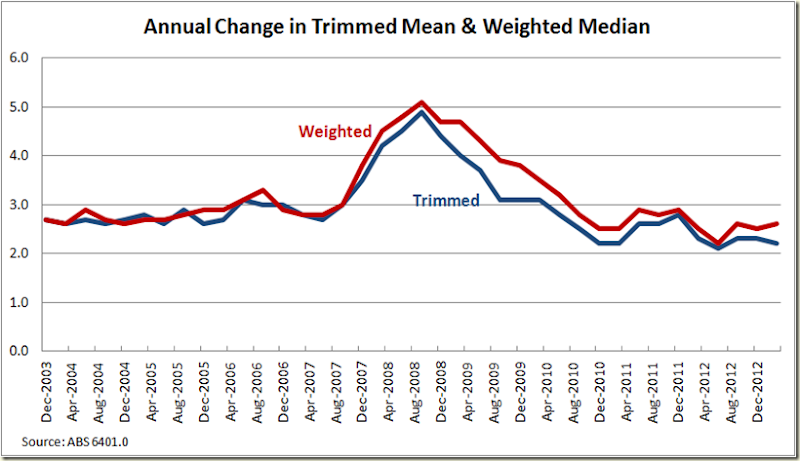 So what does it mean for interest rates? Well the 2.2% trimmed mean and 2.6% weighted median won’t have them worrying about increasing rates to curb inflation, and even if we “annualise” the quarterly increase we’re only looking at 2.0% of a weighted median and 1.2% on the trimmed mean rate. That is seriously low.

In short inflation is not a problem despite suggestions the rate cuts last year would send prices souring given the economy was running at trend. Why didn’t this happen? Mostly because the economy might have been running at trend, but it sure wasn’t when the RBA started cutting rates, and also there is a lot of spare capacity in the market, and also that high Aussie dollar is keeping import prices in check (see below).

Now I know this must be a shock to those who thought the the carbon tax would unleash the hell of inflation upon us. After all someone who has claims on being Prime Minister keeps telling us that the carbon price will cause prices to go up and up (“and that’s just for starters”).

So let’s look at electricity: 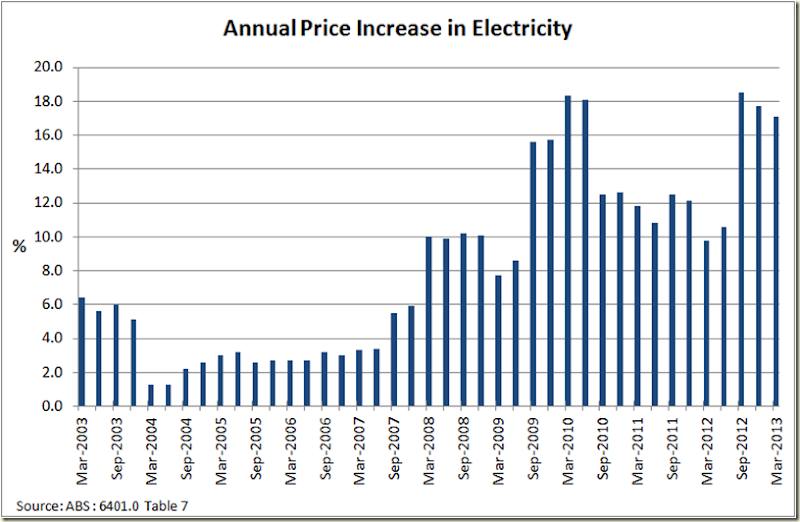 Clearly a big boom occured in the September 2012 quarter. But what’s happened since? Let’s go to the quarterly measures: 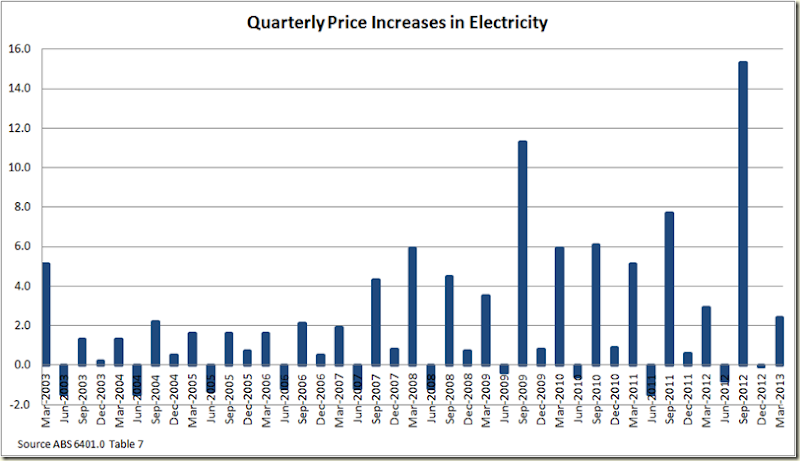 In the March Quarter there was a 2.4% in crease in electricity, well down from the 15.3% one in the September quarter last year which took the brunt of the carbon tax changes.

But is 2.4% a big increase? The problem with the ABS data on individual sectors is that it is not adjusted for seasonal variances, so let’s just look at the March Quarters to see if we can get any sense of whether 2.4% is a big jump for that time of year: 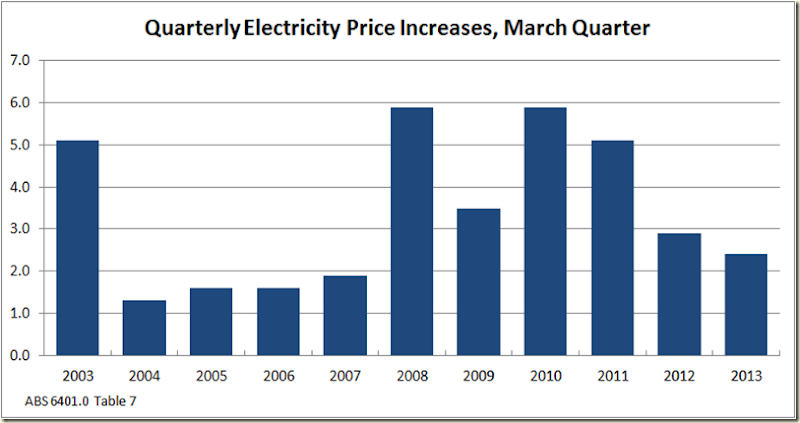 It’s actually the lowest quarterly increase in a March Quarter since 2007.

It’s also worth remembering that electricity prices only account for about 2% of the basket of goods that are used to collate the CPI. For context, Take Way food accounts for 2.62% and Tobacco accounts for 2.32%.

If you exclude alcohol and tobacco from the data, the CPI quarterly increase falls from 0.4% to 0.2%. If you exclude Housing (of which electricity is around 9%) then the CPI would have risen by only 0.1%.

Here is the CPI excluding a few elements (so the lower it is the bigger the rise of that element):

The big impacts were housing, insurance and financial services; and housing in general. Education also saw a big jump (not surprisingly given it’s the start of the school year.

But let’s look at annual price increases and get it down to more detailed categories. Don’t worry about the weightings of each of these, but here are the top 20 and they might be of interest if you think you’re rather different to the “average household” and you consume a lot more poultry than most. Electricity and Gas are not surprisingly right up the top:

And the bottom 20? Not surprisingly lots of stuff that gets imported fell in prices. As did Lamb and goat, which given Barnaby Joyce suggested the carbon tax would lead to $100 lamb roasts seems rather interesting 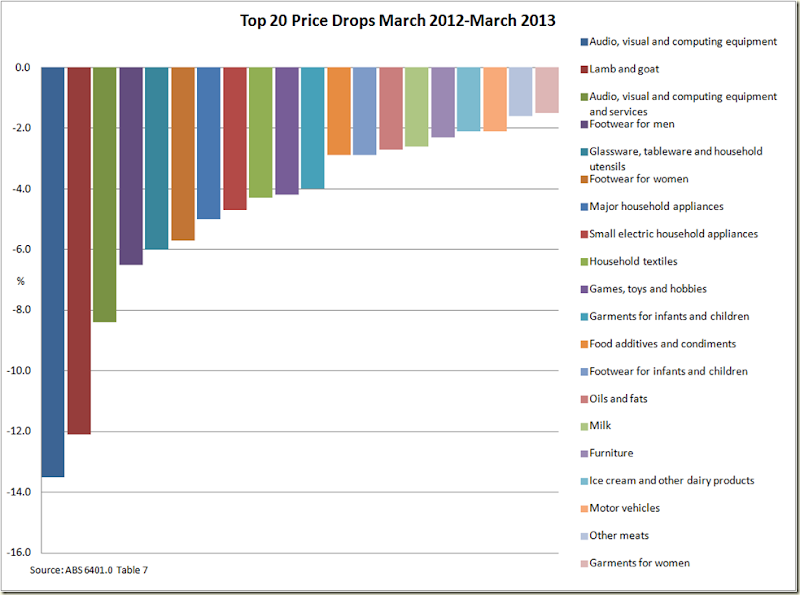 So electricity only increased (yet again) by 2.4%. Fabulous!

That's on top of the more than 30% - or so - increase (in Victoria) during the last two years to three years.

Yeah. I feel so much better now.

Spin? You mean like where I note that I am only looking at March qtr increases to get rid of seasonal variances? Or do you mean like where I also point out electricity has increased by around 17% in the past year, and with gas is far and away the biggest increase? Gee, some great spin there.

If I really wanted to spin, I would have noted that electricity prices actually fell 0.1% in the December 2012 quarter - the first time that has happened in a December quarter since they started measuring prices of electricity repeater from other utilities.

Victorian domestic providers bumped their prices up by an average of 16 per cent in January 2013 - the most recent quarter (some rather more, some a fraction less). Tariff increases are advertised in public notices of newspapers.

That's on top of the continual increases in Victoria over the last couple of years for smart metres and routine price hikes.

Must be that other states have seen a mighty drop in what people are paying for electricity.

In any case, the electricity companies here would be pleased to see domestic power price hikes presented in such a positive light. Not so much the consumer opening their latest startling bill.

That's always been the problem with CPI: the disconnect between the wallet and the national data.