Things were much better then: Soft Drinks

This afternoon was a lovely spring day that has one thinking of days past and glorious times spent as a youth playing cricket in the backyard, running through a sprinkler as no one you knew owned a pool, or joining up with your mates with some wooden guns to go off and play war.

What it also had me thinking of was the sheer joy of soft drink back then. Nowadays the myriads of soft drinks filling the aisles of Woolies and Coles are such that you can pretty much drink whatever flavour you’re after – and judging by the sales of Coke etc, everyone is drinking them. I must admit I drink a lot of soft drink – mostly the 99c Pine Crush and Pub Squash stuff. Admittedly as well I don’t drink a lot of alcohol. Maybe it’s because of the young kids, ‘but I find when I get home from work I’m not all that eager to crack open a beer and while we’ll very occasionally have a glass of wine for dinner (most likely if I have been cooking with the wine) mostly my drinking consists of coffee and soft drink (though only water at work).

This as you might be not too shocked to discover has not been the greatest decision on the part of my teeth, and it has ensured my dentist this year will be able to holiday on Hayman Island at my expense….

But while I do drink a lot of the bubbly sugar liquid, it doesn’t hold the sense of joy that it did when I was young. Most likely because back then access to the soft drink came first through my Mum or Dad, and it was not a certain thing that access would be granted.

But what I think mostly brought the sense of joy was the actual soft drinks themselves.

For you see, where I grew up, in country South Australia, we drank a brand of soft drink made locally, and by locally I don’t mean Woodies Lemonade, which is a South Australian product I have never liked, no I mean Chandler’s soft drinks, owned and distilled in the main street of Mannum by John Chandler.

Now Johnnie Chandler was an enterprising sort of chap, and he operated in a time more forgiving of things… things like bottling the soft drink in recycled beer bottles, or letting some young kids spend the day working for him despite the fact it was a school day. Now sure were he to be doing it today occupational health and safety would no doubt have shut him down and A Current Affair would probably be doing an expose on his business, but I say pah! He made great soft drink, and I won’t hear a bad word said.

I remember distinctly my class going down the main street on an excursion to see the drink being bottled. He had the bottles all going around on conveyer belts, getting washed, filled, capped all automatically. It looked very impressive to my young eyes.

He had the most amazing flavours – Ruby Cola, which tasted like well like ruby cola would be expected to taste, and it had a lovely ruby colour as well (I guess is was the Shiraz of his output); Fruit Cola, which was a more normal cola, but had a certain… well a certain fruitiness to it; Snowee Cola, which was my favourite as it had a lovely cola taste, but it looked like beer (which given it came out of an old beer bottle, who’s to say…). He also did a Sarsaparilla, a Lemonade and (I think) a Raspberry flavoured one – which I only recall because my Dad for some reason called it “Red Raaz” (which incidentally is what he still does call any raspberry soft drink).

Chandler’s operation closed in the early 80s due to his age, and most likely inquiries from the Health department, and when his doors shut, so too did a part of my youth, for the flavours were never carried on. I know there is some soft drink called “Snow Top”, but it’s not Snowee Cola, and nowhere have I come across anything to match the magical Ruby or Fruit Colas.

The thing is Chandler’s soft drinks weren’t the only drinks of my youth to be gone. Two others were there, that no longer are found on the shelves. I speak of Leeds Lemonade and Mello Yellow.

Now I loved Leeds. It was my favourite lemonade, and I don’t care what anyone says Sprite is and has never been up to it (and I will continue to say this even if you tell me that Sprite is just Leeds, renamed). Perhaps I had a soft spot for it because in Year 6 I had a Leeds Yo-Yo. It was a great Yo-Yo – nice and thick and in the hands of a skilled artisan of the Yo-Yo art, one was able to do all the tricks – especially the elusive rock the cradle.

I was not skilled in the arts of the Yo-Yo, if for no other reason than the first day I took my Leeds Yo-Yo to school it got flogged from my bag at lunch time. My Dad, when I told him of the crime, took it as a sign that he should not buy me another one, and thus my opportunity at wealth and fame through the Yo-Yo was lost.

Alas, but at least through the wonders of Youtube we can relive the glories of Leeds Lemonade through this wonderfully dated advert from 1979: 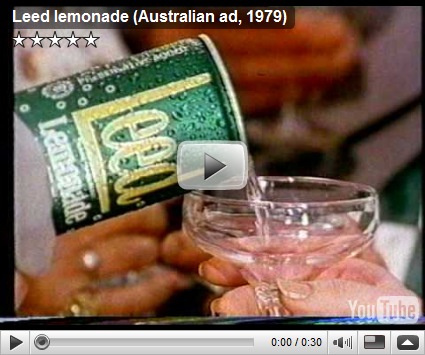 Mello Yellow came a bit later, and it only really has an imprint in my mind due to its advert. It was the ad that tried to persuade you that Mello Yellow could be drunk all in one go. This of course was a virtual dare to a 10 year old kid such as myself, and I would not be dissuaded even if actually drinking the whole bottle in one go actually made you feel like you needed to throw the whole lot back up, I was determined to be able to do it – and no amount of laughing while my sister sang the jingle as I drank and thus causing me to laugh and bring the Mello Yellow up through my nose was going to stop me.

Alas it too died out, no doubt replaced by “Lift”, and it is only now looking back at the advert do I think. Oh. My. God. Perhaps there has been an ad more filled with sexual innuendo. But I doubt it. (see I told you soft drink was better back then) 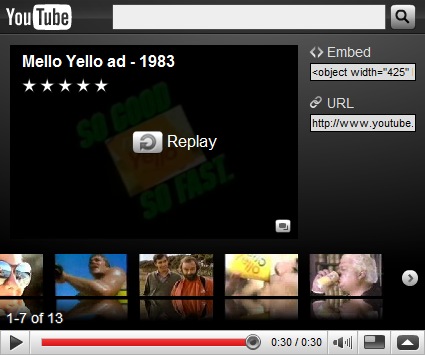 ah the independent soft drink producer. they were exciting times as a kid when the deliver truck was coming up the driveway. Damn gobalisation. I remember as a kid at the tennis club they had an ancient drink machine although at times to get the drink out of the machine after you had paid for it you needed rubik cube type solvng skills. Shame you couldn't fit the TAB adert in

Snowclad was the local fizzy drink maker where I grew up. Sadly it was bought and then shut down by Coca Cola in the 80s. I was devastated by the loss of 'Cherry Cheer' and what had to be the nicest lemonade you could imagine.

Sounds like Chandler's was before my time (and I used to go to Mannum all the time to play soccer), but I find you can recreate some of the excitement of the pre-consolidation era of the soft drink industry by going to an Asian grocery and choosing something at random out of the fridge. I recommend 'Qloo', but avoid anything that looks like it might be chrysanthemum tea.

That's what I like about new and independently-made sodas: they can be made to remind you of the culture in a place or your childhood memories. With that edge, they can compete with mainstream global brands, even without the TV commercials.