Flick of the Week: “You know, Jill, you remind me of my mother. She was the biggest whore in Alameda and the finest woman that ever lived”.

This week’s flick of the week takes us with the great Henry Fonda from Mister Roberts to the supreme spaghetti western by Sergio Leone, Once Upon a Time in the West.

The great thing about films is that you don’t need to see them when you’re young for them to make an impression. Whereas you’ll always have a soft spot for music heard in your youth, and it’s hard for you to ever think a recent song is as good as one you loved when you were 20, with film the best film you’ve ever seen may be the next one you see. While some films will have a special place in your heart because of when you saw them first, and who you saw them with, quite often as you age your tastes change and you find yourself wondering how you ever thought Top Gun was the greatest film ever made, or why you once believed that there would never be a film as deep as The Breakfast Club.

I have long been a fan of Sergio Leone – his “Dollars trilogy” of films have been favourites of mine since I was about 16. The Good, the Bad and the Ugly also sits high up on my favourite films list. But despite having read much about the brilliance of his final western, I had not seen Once Upon a Time in the West until a few weeks ago. I had actually resisted reading as much about the plot as I could, because I knew I would one day get around to watching it, and so when I saw it for $6.99 at JB Hi Fi, I snapped it up, figuring even if it was only as good as say For a Few Dollars More I’d be out in front.

I did not think I was about to watch one of the greatest films of all time.

It was amazing; just a fantastic cinema experience (and I was actually watching it on a little portable TV in a cabin in a caravan park!).

The film is in many ways a companion piece to The Good the Bad and the Ugly, as once again three protagonists are involved who could easily fit the three adjectives. Charles Bronson plays the usual Clint Eastwood “man with no name” role, except here his name is “Harmonica” – so called because he plays a harmonica more than he speaks (of course). Jason Robards plays the “ugly” role of “Cheyenne” – a killer, but one seemingly with at least some sense of right and wrong. And Henry Fonda – yes the good, the nice, the honest Henry Fonda – plays Frank, the baddest killer ever seen in just about any western. 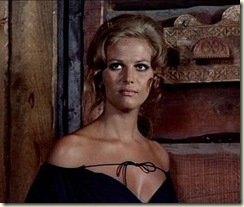 The plot involves the three men, a woman (Jill) – the utterly ravishing Claudia Cardinale – and a piece of property owned by her late husband, which is wanted by Morton, a railroad baron and boss of Frank. Harmonica and Cheyenne have their own reasons for being interested in Jill, Frank and the land. The story does not take as many left turns as does The Good the Bad and the Ugly, but it still involves enough twists to keep you wondering where it is headed.

There are so many wonderful things about the film, but first and foremost is the score by the great Ennio Morricone.  It’s almost inconceivable that Morricone has never won an Oscar for best score – after all this is the guy who wrote the music for The Good the Bad and the Ugly, The Untouchables, Once Upon a Time in America, The Mission, and Cinema Paradisio. But his best work I think is in this film, if for no other reason than it was written before filming, and Leone used the score to help pace and shoot the film.

And the pace of the film is crucial. From the incredibly drawn out build up of tension in the opening scene as three gunmen wait for a train to arrive, through to the final shot, this is a film that is paced for full impact. Many viewers may find it too slow, but for me it was a delight to watch the events unfold in such a measured, beautifully languid manner.

The use of music, the pace, the framing of shots all should be required studying by any wannabe director. In fact you just know Quentin Tarantino has watched this film about a thousand times – the use of music and sound especially will strike one as being Tarantinoesque (though of course Tarantino is being Leoneesque!). 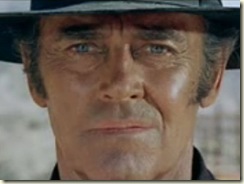 Leone is a director who loves faces, and he’ll often shown them in extreme close up, but the many long sweeping shots in this film are also jaw dropping in their construction. My favourites are the scene of Jill entering the town from the station house – which shows her moving through the station then sweeps up over the building, revealing the town for the first time – and the chilling shot of Frank’s gang as they come out of the bush and close in on a young boy  whose family has just been killed. Leone delays the revealing of Fonda until the point when it makes most impact – and he closes in on that famous face which is now smiling at the thought of killing the boy. It is a great moment in film.

The film – as is often the case in Leone film – make sparing use of dialogue. The people in this film observe and speak only when required – you can always spot the bit-player or fool in a Leone film, because he’ll talk too much and too quickly (and usually in a very badly dubbed voice). Because Leone was able to use Hollywood money for this film there are less badly dubbed voices then in his earlier films.

As is often the case with brilliant films, it flopped in America – due mostly to it being savagely edited down from its 160 odd minutes to something closer to 2 hours. It was a travesty, because this film is a masterpiece and certainly should have won Best Picture that year (beating out Midnight Cowboy). It is now considered among the greats of cinema (for what it’s worth it is ranked number 23 all time on imdb.com). It is the western for film buffs as it references many westerns that had come before it – in many ways this is Leone’s attempt at making the western to end all westerns.

I couldn’t find a decent clip of the film on YouTube, and the trailer was God awful, so below is the haunting main theme set to a series of stills from the film. Given the lack of dialogue and the accent on the faces of the actors, it is actually a good way to appreciate the film. 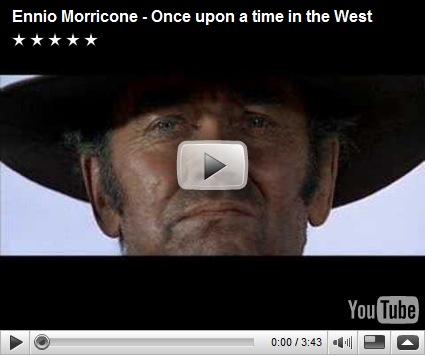 There men stand across from Harmonica at the train station
Harmonica: And Frank?
Snaky: Frank sent us.
Harmonica: [seeing only 3 horses] Did you bring a horse for me?
Snaky: Well... looks like we're...
[snickers]
Snaky: ...looks like we're shy one horse.
Harmonica: You brought two too many.