The Yankees Win the Series!

Today the New York Yankees won the World Series, beating the Philadelphia Phillies 4-2. It was the Yankees 27th Championship. 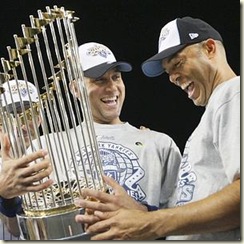 They won their first in 1923, meaning they have averaged a championship once every 3.2 years since. The next most winningest team is the St Louis Cardinals who have ten.

I have never been to New York, I’m not even sure if I’ve met anyone from New York, and yet for the last couple weeks during the post season I have been as nervous watching the games on foxtel (or on the mlb.com website) as I am while watching the Crows during the footy season.

I have never played baseball (I played a bit of softball in Primary school), and when I grew up my entire life each summer seemed to revolve around cricket. I lived and breathed the game, and from the age of 5 to 11, I think I would have given anything to have been able to play for Australia. With my best friend I played hundreds of back yard tests, and each Christmas my cousins and I would play all day – impervious to the 40 degree heat. Cricket was the greatest game ever.

And yet if you asked me know whether I would rather watch the Australians play a cricket match or the Yankees play a baseball game, I’d choose the Yanks every day of the week, and twice on weekends if they’re playing a double header. 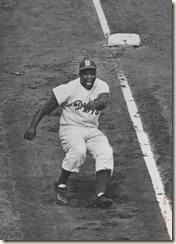 I absolutely love baseball, and I don’t really know why. When I was young I was aware of the game only peripherally. I read some stories about Mickey Mantle, Lou Gherig. I knew who Babe Ruth was; I had heard of Jackie Robinson. I saw some parts of game on Wide World of Sports. But for the most part it was just some thing that was played on the the side of the world. And yet I almost knew I would love the game.

In 1989 I spent a year in Japan as an exchange student, and Japan loves the game almost (and probably more) than Americans, and I quickly became a fan of the Yomiyuri Giants. I watched games avidly, loved playing games of “stickball” at the school I attended, and also playing games of baseball at the video game centre in my town. I knew then that had I grown up in America I would have been a baseball nut. I would look for anything I could to read about the sport - and followed the mlb scores in The Japan Times. While there I met an American who was going back to the US for a couple of weeks. He asked me if I wanted him to get me anything. I immediately asked him to buy me a Yankees cap. This was back when you could only buy them in America – now of course you can get them at any sports store. It was a special thing at the time – a piece of America, and I still have it (though if I’m honest it has never really fit me that well!)

When I came back to Australia, the game faded somewhat from my life – only really supported by my playing it on my cousin’s Sega Mega Drive, or at the local hamburger joint. I never thought of actually playing the game for real – I knew my arm was not strong enough to be a pitcher, and as a left handed thrower, I knew I could never player infield (especially short stop, which I would have loved to have been able to play). It was stupid really. I should have joined the baseball club at uni. Oh well.

At the boarding college I attended, we had a portable TV that we could book (yeah this was back in the dark ages), and each year during the World Series I would book the TV and stay up late and watch the replays. Foolish me I used to think they were live! During the early 90s the Yankees were in a pretty low patch (there second longest span without winning a World Series – 15 years from 1981 to 1996, and so I would be reduced to picking a team to support – usually I went for the Atlanta Braves because I liked their ace pitcher, Greg Maddox.

By 1996 when the Yankees started winning again, I wasn’t able to do much more than watch the replays of the World Series (which I did), but by then I knew it wasn’t live, and I was itching to have the real thing. By 2000 I had access to broadband at work and was able to “watch” the scoreboard on espn or mlb, it wasn’t perfect, but at least it was live. The internet had also allowed me to access espn and I was able to follow the Yankees throughout the whole season, reading the reports of each game, allowing me to feel like I was a real fan.

In 2001 my wife and I went back to Japan for a holiday, and in a second-hand clothes store in Shibuya that we had read about in our Lonely Planet Guide, I found an old 1923 style Yankees uniform. After much umming and ahing (and my wife telling me to just hurry up and buy the bloody thing) I bought it, and it's just about my favourite article of clothing. 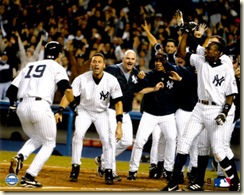 Since then the Yankees have only grown more and more important in my life – most likely because they haven’t won. In 2003, at work I was glued to mlb.com (instead of marking 1st year essays) and was madly hitting refresh in Game 7 of the American League Championship Series, wondering what had happened in the 11th innings when Aaron Boone was at the plate... only to see it finally register that he had hit the winning HR.  Alas the Yanks lost the World Series.

In 2004, I was on an espn blog when in Game 4 of the American League series against Boston, the Yankees led the series 3-0 and were up 4-3 in bottom of the 9th innings of this game with the master closer Mariano Rivera on the mound. Someone on the blog jokingly wrote “here begins the greatest comeback in history!!!”. And then it happened, Mariano allowed a run, the Red Sox won in the 12th innings, and then won the next 3 games. And I felt lousy as hell during each of them. Still do when I think about it.

Then last year a glorious thing happened. We got foxtel and suddenly I was able to watch games live – not many mind, but enough so it was more than just an odd occurrence. Suddenly, instead of watching highlights on mlb .com I was seeing it all happen, hearing the call; watching the replays; taking it all in. Ah bliss.

Except last year for the first time since 1993 that the Yankees didn’t make the playoffs. So much for foxtel.

But this year they were back, stronger, better, and richer (they are the Yankees afterall) than ever. And since May, when Alex Rodriguez came back from hip surgery, they just looked like they were going to win it all. And today they did. Did I watch it? Nope – of course I was at work, so I was reduced to viewing the scoreboard on mlb.com again. Did I tape it? Nope. Because in Game 4 of this year’s American League Championship I forgot to tape the game and they won; the next game I did tape it and they lost. Well you just can’t mess with that sign, and so if I haven’t been able to watch it live, I have not taped any game since for fear that it would just ne putting a jinx on the whole thing.

And so today is a good day, but it got me thinking about why I now love baseball and find cricket… well… not as vital as it was when I was a kid (or even when I was 20). Tomorrow I’ll write a blog comparing baseball to cricket (it was meant to this blog, but the prologue just kept going!) and see if I can get it down to some key points.

Awesome, just awesome. I had been wondering where your interest came from.

And yeah, glorious stuff. I've watched the end twice now on ONE HD. I just wish that, when i found out via the internet on my phone that they had won, i had had Frank Sinatra singing New York New York to play on my ipod. Got to get to Yankee stadium one day.

And of course it's always great to have someone else to share the experience with. We must do it again.