So the Newspoll (and the Nielson poll) came out today, showing the ALP getting a slight movement up from the last one of 56-44 to the pretty mundane  level for the Rudd Government of 57-43. All week members of the Liberal Party have been banging on about the Libs ignoring their base. Well in this poll the Liberal Party primary vote was 30%, the ALP’s primary was 43%. That figure alone might be something for Liberal Party strategists to ponder, especially when the National Party (whom some fool MPs were worried would get the base’s support) was good for only 5%.

You don’t need to be a genius to work out that the Liberals will not win Government by trying to appeal to the 5% of the population who are National Party supporters.

Turnbull got a little bump in his satisfaction rating (up 2% to 36%) , but got slammed as preferred PM. Rudd now leads him on that measure 65-14.

The most interesting question asked was if Turnbull was right to support the passing of the ETS: 53% supported it and a miniscule 26% believe he should have blocked it (that 26% by the way is known as the Liberal base).

So there we have it, Turnbull is in danger of being dumped as leader because he is supporting a policy that a majority of the Australian support. And don’t for a minute believe the bull that the Minchin-Abbott Co just want to delay the ETS. You don’t virtually split the party over the timing of passing a piece of legislation; you only go to the point they have if you are out and out against the policy. Let’s say they delay the vote and pass it in March, do you really think anyone will really understand why the hell hey did?  Turnbull knows this is the case, which is why he never talks about delay as being acceptable, he (rather echoing the ALP’s line) has made the game into pass or be a climate change denier.

So what will happen tomorrow? First there will be a vote on whether there should be a spill. If this doesn’t pass then Turnbull wins, and God knows what happens to the party. Firstly a few people like Greg Hunt should ante up and tell the Abbott side to piss off to the back bench and keep quiet. Turnbull likes to say the Liberal Party needs to be a progressive party, well the progressives in the party need to start showing some mettle.

If the spill motion carries, then Turnbull will stand and who else? Most likely Joe Hockey. Abbott is seems will stay out of the way. Who will win? Does it matter at this point? If Turnbull were to win, Hockey is untenable as shadow Treasurer. Now ok, he has been woeful in the position, but it means as well that Turnbull has lost a key progressive from his front bench. Also if Turnbull wins, it won’t be by much and unless someone tells Abbott and Minchin to either shut up or quit the party then this will just be a slow death for all involved. 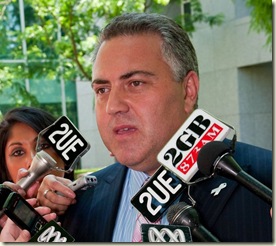 If Hockey wins, well then it is worse. For a start Turnbull will be off the front bench. Now look, I have not been a big Turnbull fan, but does anyone seriously think there is someone on the Liberal’s backbench who could replace him? Who do you want to pick from, Kevin Andrews? Alex Hawke, Patrick Secker?? Presumably he is getting backing from Abbott and Minchin on the proviso he delays the ETS Bill. Well then immediately he becomes a puppet leader. Rudd and the ALP will absolutely kill him. It will be ugly to watch. Every Question Time will be a free-fire zone. If Hockey asks a question, Rudd will no doubt wonder out loud whether Abbott gave him permission to ask it etc etc. The phrases “sold his soul”, “spineless” and “right wing puppet” will get a solid work out. And as his demeanour in Question Time in the last 2 years has shown, when things don’t go his way in Parliament, Hockey switches into a being a bit of a grump (oh Mister Speaker!!), the ALP knows this and will taunt him and taunt him.

If Hockey wins and the right agrees to pass the ETS, well then the Liberal Party has gotten nowhere except they’ve replaced Turnbull with Joe Hockey for no good reason. The right wing will think it can do anything it wants and will keep pushing the Party to the right, Hockey will be slaughtered at the next election, and the party will be stuffed.

So well done Tony Abbott, Nick Minchin and all the other dolts. You’re on track to get a maximum 30% of the vote at the next election (and you know what, I’m betting the ALP will let you have it).

Tony Abbott has just held a press conference saying he couldn’t accept the deal with Hockey to have a conscience vote on the ETS – and too right, if you have a conscience vote on this major bit of policy are you even a political party? Abbott has said he will run against Turnbull. So tomorrow it will be either Turnbull v Abbott or Turnbull v Abbott v Hockey (though I doubt he’ll run now). Either way, my money is on Turnbull, I wouldn’t be surprised if the spill motion doesn’t even get up. What an utter rabble. Two weeks of stupidity for nothing.

As soon as I wrote that Turnbull would win I remembered that last week 35 people voted for Kevin Andrews… only 7 people need to switch their vote. I still think Turnbull will win, but I’m a bit less sure now.

Ok all the press gallery journos think Abbott would beat Turnbull. I’m not sure Hockey will run, and I just can’t believe a party would elect Tony Abbott as leader. Part of me hopes they do, because I would love to see if the ALP can get 65% in a newspoll. So I am still putting my money on Turnbull; but if Hockey does put his hand up… well I’m guessing he’ll win for no other reason than enough MPs will think after all this fuss they might as well elect someone new.