Yet another boring day in politics

For those who wonder why I am a political tragic, today is one of those days that just makes it all clear.

From about midday till 3pm, the internet at my work was down and so I was somewhat annoyed because not only were a stack of work emails not getting though, it also meant I was missing the last Question Time of the year. But when the net came back I quickly worked out that Question Time was going to be very irrelevant.

While Julia Gillard was having great fun making jokes about Kevin Andrews, the twitter feeds of the Canberra press gallery journos starting coming out in floods about rumours that Tony Abbott was going to resign from the front bench, and possibly challenge. Then as soon as Question Time finished things got progressively more mad as word came that Senators Minchin and Abetz were also going, so too Sophie Mirrabella, and Tony Smith and more and more. 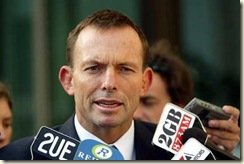 They were all resigning over the ETS. But really they were resigning over climate change and the future of the Liberal Party. Turnbull acknowledged this in his press conference at 7pm where he came out defiant and talked straight away about climate change – not the ETS. Forget whatever Abbott, Abetz and Minchin and Co say, they’re not voting against the TES because they think it’s “flawed” – “flawed” policies are amended (as this one has been) and then passed – no they are voting against it because they don’t actually believe climate change is real. You only had to listen to Eric Abetz yesterday in the Senate to understand this.

And what we have here is not an issue of leadership – this is an issue of the Liberal Party.

It is also evidence that being in Government hides all sorts of divisions. Under Howard, everyone toed the party-line (as indeed everyone in the ALP is under Rudd), but when you are in opposition the reason for keeping quiet about disagreements starts to fade, especially when after 2 years of opposition and supposedly keeping it all together you find you’re still only getting around 45% of the vote in every poll.

Turnbull has remained as leader despite his horrible poll numbers ironically because of Rudd. Rudd and the ALP are so far in front that no one thus far has been bothered challenging Turnbull because… well why bother? What reason would anyone want to lead the party to an inevitable defeat?

But now things have changed. My view is that the conservative rump of the party, led by Abbott and Minchin have decided that having a moderate leader is pointless if all you can get is 45% of the vote, and that by running an anti-ETS line they will appeal to their base (they may even think they will increase their vote – possibly they are that delusional). The problem is of course, the base was already going to vote for them. The logic that because people hate the ETS they would switch their vote to the ALP is ludicrous. And as for worrying about the National Party winning votes? Please. Such concerns make one suspect some people in the Liberal Party don’t know anything of the history of Australian politics. 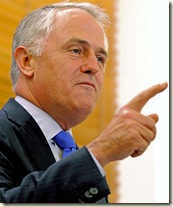 So where to from here? Turnbull is defiant as ever – great courage as ever, but also as ever zero acknowledgment of the political realities surrounding him. He is the captain of the Titanic acting like he can still get the ship to New York.

But let’s look at the options – Turnbull survives as leader… what the hell do Abbott and Co do? What the hell do the Nationals do? You have to ask yourself at this point in what sense is the LNP a coalition? With Turnbull as leader we have a split in the ranks with at least around 40% against him. If Abbott wins, well then you have Greg Hunt, Joe Hockey, George Brandis and Co suddenly having to stand up with a guy who thinks climate change is a joke, and who will campaign on getting rid of the ETS? In what sense is that stable?

Some pundits have suggested Joe Hockey could be the peacemaker. But he is essentially in line with Turnbull on every issue, and he certainly isn’t about to start saying climate change is bunkum; so the Abbott and co division remains.

It says something of the state of the Liberal Party that talk of a split is not totally beyond reason. I don’t really see it happening, but then they way things are moving in the Liberal Party who knows. This is a party with two largely opposed camps. One is the “liberal” camp, one is “conservative”, both see themselves as the true branch of the party. Under Howard the conservatives reigned supreme. Since then, the liberal side has gained the upper hand, and the conservatives are not happy – especially when the polls are so bad.

And what about the actual ETS Bill? Anthony Albanese came out saying the vote will be held at 3:45pm on Friday, and absurdly it seems like Minchin and Abetz are staying on as members of the front bench until the Bill is voted on. Just madness all round. Perhaps Abbott will call for a spill, and if he wins they’ll try and vote against it, but it’s likely at least 7 Liberal Party Senators will vote for it anyway, so where does that leave the Liberal Party?

This is bizarre stuff, and not likely to be resolved anytime soon. 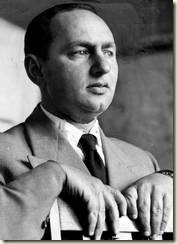 In the 1950s, the DLP split was urged on through Bob Santamaria and his anti-Communist line , now it seems the conservative side of the Liberal Party are being urged on by media types such as Andrew Bolt, Miranda Devine and Janet Albrechtsen and their anti-climate change line. Whether they will be foolhardy enough to actually split from the Liberal Party, I can’t say – it seems just too big a step to make. And in some ways it doesn’t matter, because the Liberal Party at the moment, like the ALP during the DLP years, is completely unelectable.

Rudd, when he devised his ETS strategy, did it knowing full well this was an issue that would wedge the Liberal Party; but not even he could have seen the wedge working so well. It all makes it clear that Rudd is easily the best politician of his generation. Here’s what has happened in the last 2 years: Howard lost the election and his seat; Costello saw the numbers and knew he couldn’t win the next election and left; Nelson didn’t last a year; Turnbull has been mired in a preferred PM number of around 20%, and is now terminal as leader; and the Liberal Party seems to be attempting to commit suicide. These things didn’t all happen by accident. Rudd has played Turnbull and the Liberal Party like a cheap piano, and if there is one thing you know about Rudd is that when he has an opponent down, he goes in for the kill, so expect Rudd to say or do anything he can to increase the breech in the Liberal Party.

An amazing end (almost) to the political year. And a great week for political tragics.

Good for the country? Well not if you believe a democracy needs a strong opposition…

Thankyou for your excellent column and please keep on writing.
You have expressed in writing exactly my opinion

This is the best piece I have read all day.

Today and this week has been so exciting, as exciting as utegate and fake email, that even got thrown in the mix. The Liberals have sure blown themselves up this time.

I will tell you I have read and watched plenty today.