Today the Newspoll was released in The Australian, showing the ALP’s two party preferred was at 56% – up from the rogue poll of two week’s ago, but still down on the 59% of a month ago. 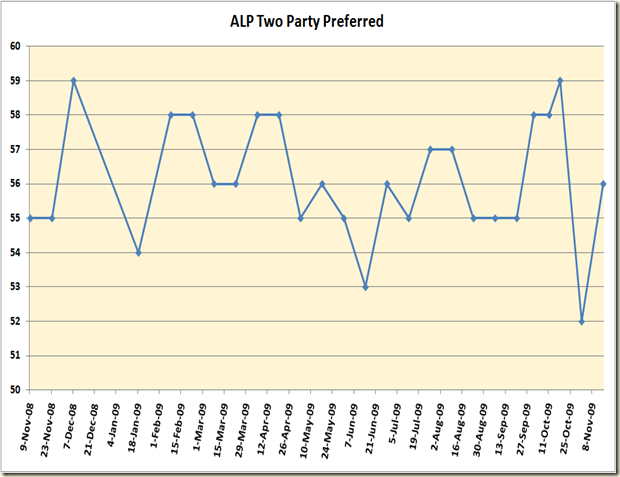 In reality all that has happened is normality has resumed. Below is the ALP’s two party preferred vote from Newspoll over the last 12 months.

It doesn’t make for fun reading for the Liberal Party. Given the ALP’s vote at the 2007 election was 52.7%, all but one poll (last fortnight’s) has shown the ALP increasing its vote.

Of more concern for the Liberal Party is that as of today, Morgan, Neilson and Newspoll all have the two party preferred at 56-44. It will be interesting to see how these polls diverge from here.

But here’s a list of the number of polls and the ALP’s result:

Which means at best they’ve had one poll which would have them in a position better than the last election, but still not good enough to actually win the election, and unfortunately as well, everyone associated with that one poll has written it off as a statistical quirk, that didn’t actually reflect reality. 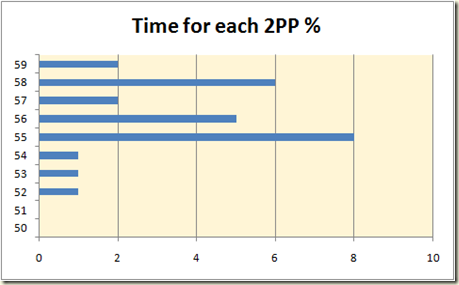 As I say, not fun reading.

Still you have to feel a tiny bit sorry for Turnbull when just before Question Time, the news breaks that 6 members of the Liberal Party and 4 of the National Party have said they will vote against the ETS come what may.

It made for a very easy QT for the ALP, as all and sundry lined up to bag the climate change rabble on the opposition benches.

It was actually a schizophrenic question time – the ALP asking about the ETS and the Liberals (and pretty much only Turnbull) asking Rudd about the Oceanic Viking – essentially trying to get Rudd to admit a special deal had been done. And of course one has been done, but there’s no way in hell Rudd is going to admit that. And his ability to answer questions was made all the more easy because yesterday afternoon Turnbull had held a press conference straight after question time and said Rudd had misled parliament over whether or not Rudd knew about the decision to offer the asylum seekers the deal they have now got.

It is a pathetically trivial inside Canberra type debating point – especially as Rudd is saying he is in full agreement with the decision taken. And also Rudd is not so dumb as to unequivocally lie in parliament. You would think Turnbull had learned this by now, but no, he just can’t resist being a lawyer and thinking tripping Rudd up over some wordage will win him the next election (if not have Rudd resign). All his assertion did was allow Rudd in every answer to Turnbull taunt him to put up or shut up, and to recall the Godwin Grech Affair.

An interesting decision came today when the Liberals with nutty Senator Fielding voted to delay debating of the ETS in the Senate. Debate was meant to being today, instead it will now being… well sometime. The fact is the Opposition doesn’t want to debate the issue because there is absolutely no unity on this issue. However on this issue, Turnbull can run, but he can’t hide. Sooner or later there will be a vote…

Coates forgets there’s been a change of Government

The other major news to occur today was Sports Minister Kate Ellis releasing the long awaited Crawford Report on Sports funding. It recommended against increasing sports funding to elite sports and also suggested the target of Australia coming in the top 5 at the Olympic Games should be revised to Top 8. In essence the report states that too much funding goes to niche Olympic Sports which no bugger actually competes in regularly, and which few care about other than during the two weeks of the Olympic Games. As one of the journalists nicely put it, we’ve been doing better and better at the Olympics since 1976, and yet the rates of obesity are increasing every year, so the link between elite sport and a healthy public is somewhat weak.

Now look, I love the Olympics. Love them. I love elite sport. But the AOC asking for an EXTRA $100 million a year just so we can beat the United Kingdom at the Olympic Games is an absolute outrage. Say it again slowly – one hundred million dollars a year extra. John Coates, the head of the AIOC came out in response to the release of the report in quite possibly the dumbest rant ever by someone trying to lobby the Government to fund his organisations:

“In your words, I’m pissed off… this is a nonsense … this funding is vitally important to the entire nation… The report is disrespectful of all the work that has been done, particularly since the 1980s, in getting us to where we are… This is an insult to some of our great Olympic champions…. Is Mr Crawford suggesting the gold medals won in Beijing by Matthew Mitcham, Steve Hooker and Ken Wallace meant nothing to the Australian people? Is he telling us the gold medals won by our rowers and sailors count for nothing?…

I will leave it to you to tell (archer) Simon Fairweather and (weightlifter) Dean Lukin he's no longer a hero…. They are the ones who are entitled to feel that what they have done for their country doesn't count.''

Coates said Australia's slide down the Olympic table was  "already happening''. "We think we are headed at best for eight in London,'' he said, after a sixth place in Beijing.

Then he came out with this corker:

"Now he (the report's author, businessman David Crawford) is telling us eighth is good enough, or maybe 10th is good enough for Mr Crawford. I just don't think he gets it. It seems un-Australian to me to settle for something second best.''

Well now. “Un-Australian”? Does he think Jon Howard is still in charge? Coates needs to take a good long hard look in the hall of mirrors, because he is living in fantasy land. To say this report is disrespectful of Dean Lukin (err Gold medallist way back in 1984!) is just stupid. It’s beyond dumb. And Ken Wallace? Sorry John, as I say, I love the Olympics, but I had to look him up on Wikipedia to remember who he was.

Does Coates think this is the way to win friends and influence people? His rant has forced the Government's hand. There is no way they will agree to him now, otherwise it’ll look like backing down. And I have to say – a quick squiz a the comments on the news.com.au story on the topic suggests the hoi polloi are not all that eager for Oates and his athletes to get an extra $100 million….

Coates needs to calm down. This report doesn’t recommend cutting funding. He is perhaps finally realising that unlike when Howard was in office he can’t just pick up the phone and talk to the PM. He also should calm down about this whole Top 5 bullshit. It is an arbitrary number that is absolutely meaningless. Swimming and athletic finals both often involve the top 8 competitors, so finishing in the Top 8 overall seems to me like a damn fine aim.

Look back to Atlanta in 1996 – Australia came 7th, and I thought that was fantastic. Every gold medal was a thrill. Australian need to realise just how amazing a feat it is to win one, and dopey comments by John Coates only serve to make people think they come up with the rations.  Look who “beat” us in 1996 – the USA, Russia, Germany, France, China and Italy. In 2008 the top 10 consisted of China, United States, Russia, Great Britain, Germany, South Korea, Japan, Italy, France and us (we came 6th). Now I have to say all of those countries have bigger populations and all except South Korea have a bigger GDP (Korea comes 15th to our 14th on the GDP table). So to me, I think we’re doing damn well to be in that group. Canada, India, Mexico and Brazil all have bigger GDPs than us, yet we’re “beating” them.

So if we “fall down” the list a bit, does that really matter? I love sport, and think, like the Arts, the Government should fund it, but Coates’s call for an extra $100m a year says more about what a money driven sham the Olympics have become than it does about the importance of sport in this country. An equivalent to his argument would be that we should give $100m to Australian film each year so we can have a film in the Oscar Best Picture nominations. It may be a nice warm and fuzzy goal, but is it why film is important? Just as you shouldn’t make films to win Oscars, you shouldn’t just fund sport to win Gold medals.

Coates got me a bit lathered up today. I was all ready to set my face to 'outraged' but his tirade was so vent-of-spleen hysterical that I was actually chuckling by the end of it. I would suggest that Reality and Coates have never met. Ever.