The Cup analogies floweth over

Kevin Rudd picked the winner of the Melbourne Cup – Shocking – ensuring that any journalists struggling to come up with things to write could at least take heart that their piece will have an appropriately dumb heading – something like “Rudd’s Shocking Interest Rate Rise”.

Incidentally the last time Rudd picked the winner of the cup – 2007 – the Reserve Bank also lifted interest rates. Back then of course it was used by Rudd to skewer Howard; this time as PM, he is the one who has to do the defending. Fortunately the RBA statement did most of the work for him.

Worried about the stimulus not being drawn back? Try this from Glenn Stevens:

Economic conditions in Australia have been stronger than expected and measures of confidence have recovered. Some spending has probably been brought forward by the various policy initiatives. With those effects now diminishing, these areas of demand may soften somewhat.

“those effects now diminishing”; “demand may soften” all point to the RBA not being worried that the fiscal stimulus is overheating the economy.

What about the stimulus putting pressure on inflation?

Inflation has been declining for the past year. In underlying terms, inflation should continue to moderate in the near term, but now will probably not fall as far as earlier thought. Headline CPI inflation on a year-ended basis has been unusually low because of temporary factors, and will probably rise somewhat over the coming year. Both CPI and underlying inflation are expected to be consistent with the target in 2010.

Hmm, not much for Turnbull or Hockey to use there. In fact the entire statement gave them bugger all to work with – especially the last two sentences:

With the risk of serious economic contraction in Australia now having passed, the Board’s view is that it is prudent to lessen gradually the degree of monetary stimulus that was put in place when the outlook appeared to be much weaker. The adjustments at the October and November meetings will work to increase the sustainability of growth in economic activity and keep inflation consistent with the target over the years ahead.

The key phrase is “lesson gradually”, meaning don’t expect sharp and vicious rises in interest rates, and also highlighting that the rate is still at a level which will “work to increase the sustainability of economic growth” – ie it is still stimulating the economy. As Rory Robertson from Macquarie Bank told ABC news:

"At this early stage, the RBA is not trying to slow the economy, not trying to nip Australia's hard-fought economic recovery in the bud," he told ABC News Online. The RBA's objective simply is to edge up its policy rate towards more normal levels, from an emergency 3 per cent rate towards a still very, very low 4 per cent rate, for starters." 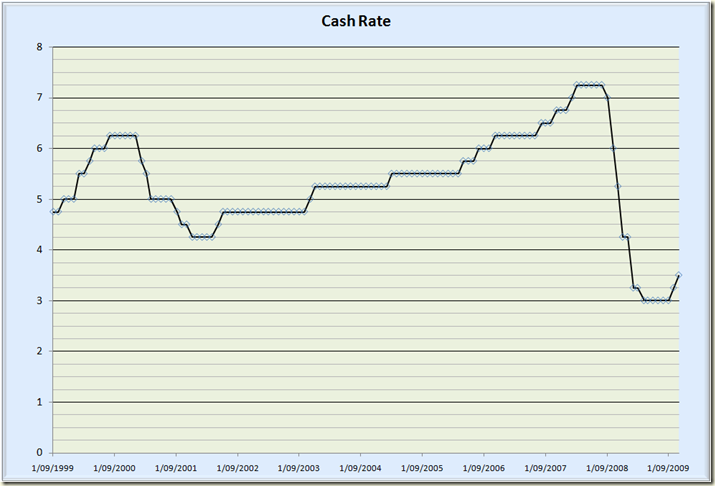 Remember that phrase “very, very low 4 percent” if you should hear a friend whinge about interest rates going up.

The graph on the right shows the RBA cash rate every month since September 1999.

It makes for pretty brutal reading, and shows that we are currently at absurdly low levels (and I haven’t even cropped the graph as Howard and Costello did during the 2007 election campaign to make the peaks look higher).

So given that the economy is not a real winner for the Liberals, expect them to mostly ignore it and keep focussing on asylum seekers.

Tony Abbott certainly was when he came out with this bottom feeding line this morning:

You look at this terrible tragedy that's unfolding in the Indian Ocean at the moment and you've got to say this is a comprehensive failure and it's all the Prime Minister's fault.

It’s the line Andrew Bolt has been running for ages – being “soft” on asylum seekers only encourages them to try to come to Australia by leaky boat and thus if the leaky boat sinks and they drown Rudd is to blame for the deaths. It is utterly beyond the pale. And that Abbott would wheel it out shows that he’s obviously let today’s Newspoll go to his head. He came out later to “clarify” his statement telling The Australian:

“I am not saying Kevin Rudd is responsible for these people drowning. No I am not.”

Annabel Crabb on twitter remarked that Abbott’s outburst had reminded her of 2001 and an exchange between Howard and Beazley. Howard at the time was reacting to what he said was Beazley’s accusation that Howard was responsible for the deaths of some asylum seekers.

JOHN HOWARD: It sank in Indonesian waters, yet Mr Beazley has tried to exploit that human tragedy to score a cheap political point. He implied that that happened because of a failure of policy on our part. I think that is contemptible.

KIM BEAZLEY: It's a major human tragedy if that has occurred and that is a very sad thing indeed. What it points to is the failure of policy. We have not got the agreement we need with Indonesia in order to be able to ensure that those who put themselves in such danger are not encouraged to do so, that they're not encouraged to come to this country, because we've got a right relationship with Indonesia and a right process there.

The interesting thing is, in 2009 Rudd is arguing both Howard and Beazley’s lines – that the opposition is using tragedy to score cheap political points, and that Australia needs to work with Indonesia.

The story in 2001 also ended with this rather similar titbit:

Newspoll says the Government's 11-point lead of last week is down to four points today on a two-party preferred basis with a huge surge in support for Kim Beazley himself.

Of course the difference with this week’s Newspoll, is that there has been zero surge in support for Malcolm Turnbull.

But it all points to a bit of déjà vu all over again.

I’ll end with this one Melbourne Cup link. The horse that came last in the cup was called “Warringah”, which is also the name of Tony Abbott's seat. So we had Rudd tipping with winner, and Abbott coming last.

Yep, déjà vu all over again.