Call them guilty pleasures, call them underrated gems, call them pure shite. For me they are dumb films I can’t resist. They’re films that I have seen far too often because they’re shown far too often on TV. And yet whenever they’re on, I find myself grabbing a packet of chips, sitting on the sofa and loving every minute.

1. A cast or crew full of talent who are all doing it for the money.
2. At least 3 or 4 completely outrageous lines of dialogue that just demand to be said at random times after viewing.
3. If involving a disaster, one person who predicts the whole thing only to be ignored by everyone (especially superiors)
4. Action! I find dumb romantic comedies are generally just dumb (though there are exceptions as you’ll see below). 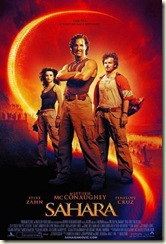 This is the film that inspired this list (mostly because it is on Channel 10 as I write!). Ok, let’s see, are there good actors, doing it for money? Yep – William H Macy, Steve Zahn, Penelope Cruz. Does it have Matthew McConaughy? Oh yes it does.

Is it stupid? Hell yes! Get this, the film is about finding a US Civil War ship in Africa AND about a disease flooding through the country due to toxic waste by an evil corporation! All dumb films I can’t resist must have a requisite amount of sincerity, and this has it in spades. A friend of mine called this The Constant Gardener for dummies and that’s as good as a description as I can come up with. The perfect example of this is that it features a stupid computer graph showing how quickly the toxic waste will spread across the world, complete with a Government official who discounts it straight away.

It also has great dumb moment – McConaughy wind surfing a plane across the desert, and plenty of stupid dialogue:

And it has Matthew McConaughy! Of course it will be dumb. But while I can’t get through Fool’s Gold or Reign of Fire this one gets me suckered in every time. It’s a pity it flopped (and that Clive Cussler went so batshit over the adaptation of his novel) because the studio obviously hoped to make some sequels, and I would’ve been loving all that dumb fun. 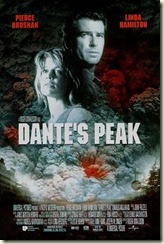 Unlike the other volcanic picture out in 1997, Volcano, which was just dumb, this one is a big favourite of mine.

What’s not to like? Pierce Brosnan plays a vulcanologist who plays by his own rules (there’s always one in every team), who is pretty sure the long dormant volcano above Dante’s Peak is ready to blow. Everyone ignores him of course and then… well you know the rest. But heck it’s fun and dumb.

There’s the nude bathers who die when the water suddenly turns boiling hot, the trip on a dingy through the lake which has turned to acid – and ending with Granny towing the boat the last bit of the way, it has a dog, kids in constant danger, plus a sassy woman who runs the local coffee shop, and (of course) is mayor of the town in her spare time.

Much smarter than Twister and a lot more fun as well (not having Helen Hunt helped in this regard). Dumb dialogue? Try:

Harry Dalton: My 9th grade science teacher always said that if you put a frog in boiling hot water, it would jump out, but put it in cold water, and heat it up gradually, it would slowly boil to death. What is it to you?
Nancy: Your recipe for frog soup?
Harry Dalton: No. It's my recipe for a disaster

It also has this line:

Paul Dreyfus: [during the meeting] Ladies and Gentlemen, I can assure you that there is no immediate danger, I believe that this is not the time to put this town on alert. This type of thing happened with mammoth mountain in 1980. The good thing is, that the mountain didn't go up…

A perfect use of the public official getting it completely wrong (which should be known in screenwriting circles as the “Mayor Vaughn”). 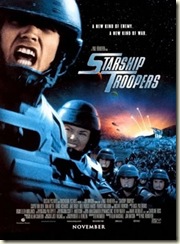 Oh this one is pure gold. I even own the DVD of this. I must admit I’m in the David Stratton camp of thinking this is actually more smarter than it looks. But geez it is dumb as well! Look at that cast – Casper Van Dien and Denise Richards are the leads. Yep Casper Van Dien. It says something I think, that in the time since his work in this film, his best roles have been doing the voice-work for the Starship Troopers computer game, and reprising his character in Starship Troopers 3.

Director, Paul Verhoeven is a talent, but he loves dumb films that are fun – see Basic Instinct, Robocop, and Total Recall – and on this he pulls out all the dumb, fun stops. There’s the requisite amount of nudity, dopey lines, big action, and Michael Ironside. And if Micahel Ironside doesn’t let you know you’re in for a fun dumb action film, then I don’t know who does.

It also features Neil Patrick Harris back when he was trying to escape being forever known as Doogie Howser.

But most of all this film has the bugs – the greatest bugs ever brought to life by CGI. You’ll be holding on tight when the attack bugs come out to play, but when you see the brain bug suck the brains out of Patrick Muldoon, you’ll feel safe knowing that you’re knee deep in fun-dumb. 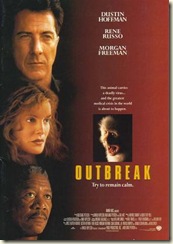 With that cast, this film may quite possibly hold the record for the most number of people walking around a set ringing up their agents just to double check that the money has been placed into their bank accounts.

This film has it all – dumb dialogue (mostly by Sutherland in his full-on arrogant General role), a graph plotting the impact of the virus, a scientist who plays by his own rules, a love interest who is now sort of on the other side, and a monkey.

It has a virus so powerful it will kill everyone in the country within 48 hours, and yet so weak that Renee Russo is able to get better just by having some substance that looks suspiciously like orange cordial put into her system through an IV (and they’re also able to mass produce the antidote without the slightest bit of trouble).

It is also an action film with Dustin Hoffmann as the lead. 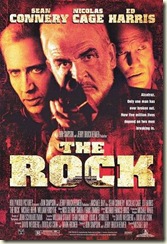 Look at that cast! Sean Connery, Ed Harris, Nicholas Cage – between them 5 Oscar nominations and 2 wins. Throw in the wonderful John Spencer (Leo McGarry from The West Wing), John C McGinley (Dr Cox from Scrubs), the ever dependable David Morse and Michael Bein, and well you got yourself a movie worth watching and I don’t care what the script is like… which is just as well because this script is dumb. A group of disgruntled special services guys take hostages on Alcatraz and threaten to blow up San Francisco with some toxic nerve gas unless some restitution is paid, cue Nic Cage, super chemical weapons expert and Sean Connery as the only person to have ever escaped from Alcatraz…. uhuh…

Look forget the plot; enjoy the car crashes. This is Michael Bay after all. The point is not to think, but to laugh and enjoy. Heck I enjoy this film so much it was one of my Flicks of the week. It also contains the great line of dialogue: “I’m gonna take pleasure in guttin’ you, boy!” There’s something so lovely and poetic that it could fit in just about any play or film. You can’t tell me that line wouldn’t have made it into Macbeth were Shakespeare around now… (and his screenplay was being directed by Michael Bay)… well ok, maybe not, but it sure is a great line to use when playing against someone in sport… though I must admit it does lose some of its comedic effect if the other person hasn’t seen the film…

As I said in my flick of the week review of this film, the sad thing about The Rock, is that now one looks back with a sort of nostalgia at such films.

Sandra Bullock films. Bullock is almost the patron saint of dumb fun chick flicks. Check out Miss Congeniality, Two Weeks Notice, Speed… all so very dumb, and all so easily put into the “Oh what the hell there’s nothing else on I might as well watch it” category.

Keanu Reeves films. I can’t believe I left out Point Break and The Replacements, where he played respectively, Johnny Utah and Shane Falco. How could they not make a dumb but fun list?? The paucity of acting done by Reeves in both of these films is breathtaking. In one he’s an ex-college quarterback who is now a FBI agent going after bank-robbing surfers(!!) and in the other he is an ex-college quarterback brought in to lead an NFL team during a players strike. What a range! Point Break also has Patrick Swayze – a sure guarantee of fun and dumbness, and The Replacements has Rhys Ifans saying some of the dumbest lines in history – such as the fact that he, a Welsh soccer player, apparently lost money in Wales betting on Falco’s side in the Sugar Bowl…. yep all soccer-mad Welshmen love to gamble on American college football… and it also featured Gene Hackman in the Everest of “doing it for the money” roles.

Top Gun. Need I say anymore? (And if I ever were to meet Tim Robbins, I would go up to him and say “I loved you in Top Gun” – yes Mr. Left-wing conscience played Merlin, the navigator for Cougar (and later Maverick)).

Revenge of the Nerds – time has perhaps not been kind to this film, but back when I was a teenager, this film was, dumb and oh so very fun.

True Lies – has been on TV far too many times, but seeing Jamie Lee Curtis destroy her dress and magically come up with a sexy-little black dress, hearing Tom Arnold’s comedy shtick, and the great exchange with Grant Heslov (who was also in Dante’s Peak) as Faisil and Charlton Heston:

Faisil: They call him the Sand Spider.
Spencer Trilby: Why?
Faisil: Probably because it sounds scary.

is just too hard to resist.

There are many others I am sure that I can’t recall at the moment, but they are the backbone of the film industry! Stupid films that make money at the box office and keep getting run on TV because we keep watching them. What’s not to like about that? Bring them on!

Starship Troopers is excellent. But have you managed to sit through the two sequels? They are horrific.

Voyage of the Rock Aliens.