For the first time I want to buy a computer game that has the adjective “controversial” attached to it. Today Activision’s Call of Duty: Modern Warfare 2 (otherwise known as COD4.2 because it is actually the sequel to Call of Duty 4) was released. The game has been described as controversial because appa 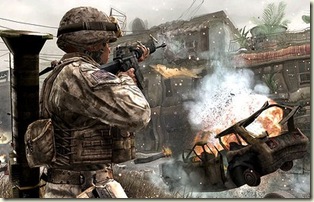 rently at one point in the game, players can infiltrate a terrorist group and in the process can be in a situation where they are able to shoot innocent civilians in a terrorist attack.

Well excuse me for not feeling all that outraged. Killing innocent civilians?? Oh geez, let’s run for the hills! Spare me. I guess when I’m playing Crysis and I go out of my way to shoot a Korean soldier with a shotgun from point blank range that’s ok then because he’s not “innocent”?

Games have been about death and destruction since games began – in fact even before. When I was growing up I would go through periods where every afternoon meant getting together with my friends and playing war. We had wooden guns, and sure when you got shot you had only to count to 20 before you could live again, but there was a reason we played “war” and not “chasey”.  Heck I grew up wanting to join the army and go to war. That is until I realised the chances of my being able to storm the beaches of Normandy or fly a Wildcat in the Battle of Midway were rather limited, at which point I decided instead to fight my wars in video games. 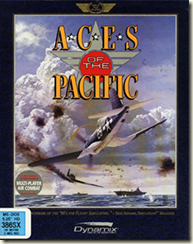 One of the first computer games I owned was a wonderful flight simulator called Aces Over the Pacific. In it you could play as either a Japanese or  an American pilot. Did I feel any guilt playing as a Japanese torpedo plane pilot, coming in to lay waste to Pearl Harbour? Hell no. I felt as much guilt as I did when playing Civilisation I decided the best way to respond to another nation breaking a treaty with me was to nuke every city they had.

Playing as the bad guy is actually a pretty common part of playing computer games. Heck, you only have to have watched War Games growing up, where Mathew Broderick immediately chooses to be the Soviet Union when he plays “Thermonuclear War” to see that being bad in a game can be fun.

Of course the thing is that today’s games are much more realistic, and thus comes the outrage.

In the past, perhaps only one game that has provoked controversy have I wanted to play – Fallout 3. That game is set in a post-apocalyptic world. It was originally denied classification in Australia because:

"The player can also select and use 'Morphine' (a proscribed drug) which has the positive effect of enabling the character to ignore limb pain when the character's extremities are targeted by the enemy. The board made explicit mention that the game's violence "could be accommodated at an MA15+ level of classification", leaving its concerns about the depiction of drug use as the sole reason for refusing classification.

So a game showing morphine being a pain reliever is enough for it not to be classified. Heck, I better close my eyes next time I watch Band of Brothers, because they were shooting up morphine in that show like it was some sort of miracle drug! 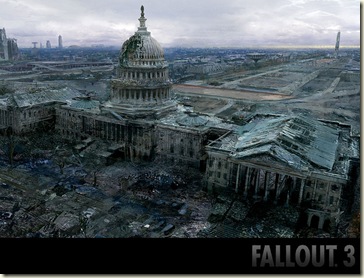 And here we get to the stupidity of it all. The developers of Fallout 3 took out that aspect of the game, and so it got an MA15+ rating, meaning teenagers were now able to play it. Because Australia does not have an R18+ rating for games, the board was not able to keep the game as it stood, only preclude teenagers from playing. So they took out the morphine but kept in the mass killing. Guess that’s a win for the wowsers.

The stupidity of the Australian Classification system is revealed when you read that the board approved COD4.2 as an MA15+ rating. And the makers didn’t have to change a thing – the playing as a terrorist stays and so does kids playing it.

Now I’m not arguing that kids shouldn't play it – after all having played previous versions of Call of Duty I can say quite confidently it is not a game that rewards evil behaviour (and by all reports this version of the game doesn’t either). But if you were someone who wanted to keep “evil games” out of kids’ hands wouldn't you want there to be an R18+ rating so kids couldn’t play them?

At this point we should bring in South Australian Attorney General Michael Atkinson. For an R18+ classification to be introduced in Australia all state and federal attorneys general must agree to it. Atkinson has stated he will never agree to it. Why? Because:

He doubts whether any safeguards could be put in place to deter young people, who after all (are) the most computer literate and savvy in our society, from being able to access material."

You get that? He is against bringing in an R18+ classification on games because he thinks it won’t deter teenagers from accessing it. So instead his policy (or lack thereof) actually results in games being given an MA15+ rating, which not only allows kids to play them, but actually lets parents feel like it is ok for them to play it – in effect encouraging them to buy it for their kids because it has been given the stamp of approval by the Government.

So when COD4.2 came out, what was his reaction? Surely he must be outraged at such a system that allows the game to be played by kids? Nope. Instead  he said,"Expecting game designers to be responsible by not glorifying terrorism will always lead to disappointment."

Huh? So his policy is that gamers should self regulate?? You would think he would be up in arms, saying teenagers shouldn’t be allowed to play such games. But instead he is the one person stopping such a restriction being imposed.

Perhaps there’s logic there, but it’s way beyond me.

Look, most of the games that have been refused classification in Australia are not games I would particular want kids to be playing.  Some of them seem pretty vile. But why is it that a film can depict things that can’t be depicted in a game?

Most gamers are now above the age of 18, and many computer games are decidedly not for kids – and nor are they aimed at them. But currently in Australia, parents are denied making informed choices, because the fact is, games that are on the borderline mostly are approved at MA15+ with little or no changes rather than be denied classification, which means most parents would then buy them without concern.

The truth is Atkinson has ingeniously come up with a policy which is actually achieving the exact opposite of that which he aims.

Mike Rann should slap Atkinson on the back of the head and say to him (as my Dad would) “wake up dopey”. Bring in an R18+ and then let the classification board debate whether or not a game should be MA15+ or R18+, rather than the farcical situation we have now that lacks logic and doesn’t help anyone, except kids who can con their parents into thinking that an MA15+ game is ok to play.

R ratings make baby Jesus cry. And me. Left 4 Dead 2 is the latest to be banned. BOO!

I just re-read that. Let me make myself clear. There should be an R rating for games.

Yep, even Rod Flanders would want R18+ classifications for games!