Today the Reserve Bank to no one’s great surprise kept the cash rate on hold at 3.50% 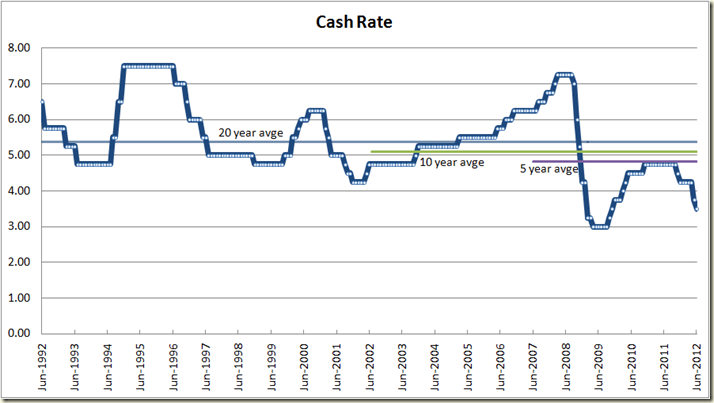 Obviously of course while this is great it doesn't automatically mean everything is better than ever before – as the chart I used a couple weeks ago on the percentage of disposable income spent on interest payments showed: 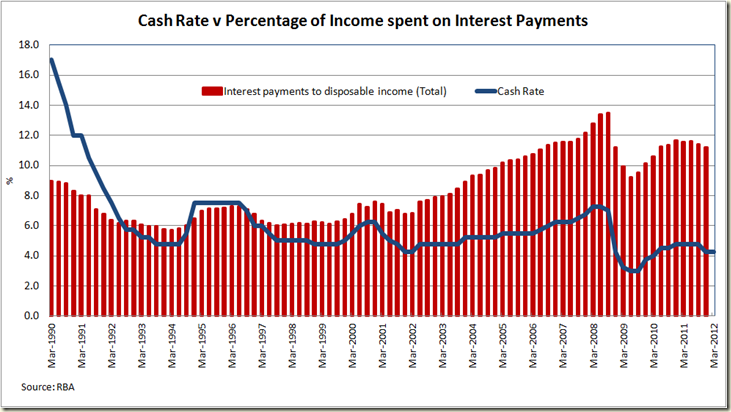 In terms of macroeconomic policy however, I think keeping the rates steady was an excellent move. Much better to try and keep rate at a level that gives room to move later if need be – last thing we want to do is be America, the UK or Canada: 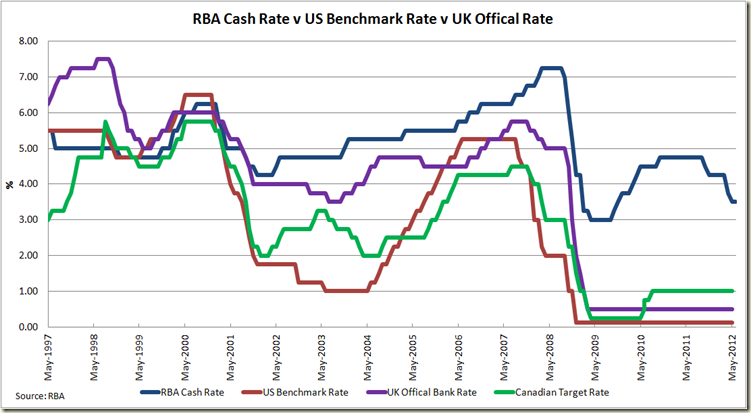 The RBA Governor’s statement suggested overseas was not great, but perhaps not as horrible as it was, however, just for a bit of fun it might soon be just as horrible:

Growth in the world economy picked up in the early months of 2012, having slowed in the second half of 2011. But more recent indicators continue to suggest weakening in Europe and a slower pace of growth in China. Conditions in other parts of Asia have recovered from the effects of last year's natural disasters, but the ongoing trend is unclear and could be dampened by the effects of slower growth outside the region. The United States continues to grow at a modest pace. Commodity prices have declined, which is helping to reduce inflation and providing scope for some countries to ease macroeconomic policies. Australia's terms of trade have peaked, though they remain historically high.

Not a lot of joy to be found there. How about the domestic economy?

In Australia, recent data suggest that the economy continued to grow in the first part of 2012, at a pace somewhat stronger than had been earlier indicated. Labour market conditions also firmed a little, notwithstanding job shedding in some industries; the rate of unemployment remains low.

The first sentence reflects the GDP figures of last month that were certainly above expectations. Inflation?

There have been no changes to the Bank's outlook for inflation. Over the coming one to two years, and abstracting from the effects of the carbon price, inflation is expected to be consistent with the target. Maintaining low inflation over the longer term will, however, require growth in domestic costs to slow as the effects of the earlier exchange rate appreciation wane. 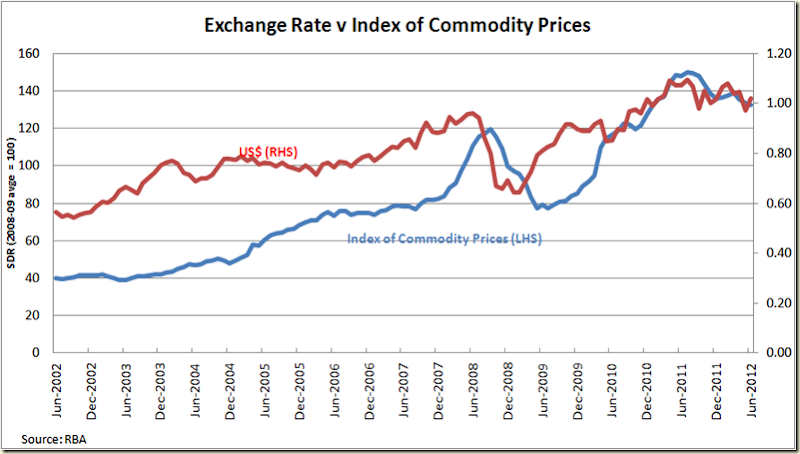 And when the exchange rate declines, that makes imports more expensive and thus inflation goes up.

Interest rates for borrowers have declined, to be a little below their medium-term averages. Business credit has increased more strongly in recent months, though credit growth remains modest overall. The housing market remains subdued. The exchange rate has been volatile recently, but overall remains high.

The exchange rate is still very high historically. After the RBA cut rates in May by 50 basis points and the Federal Budget projected a surplus, the exchange rate declined (as hoped). But in the past 5 weeks it has gone back up: 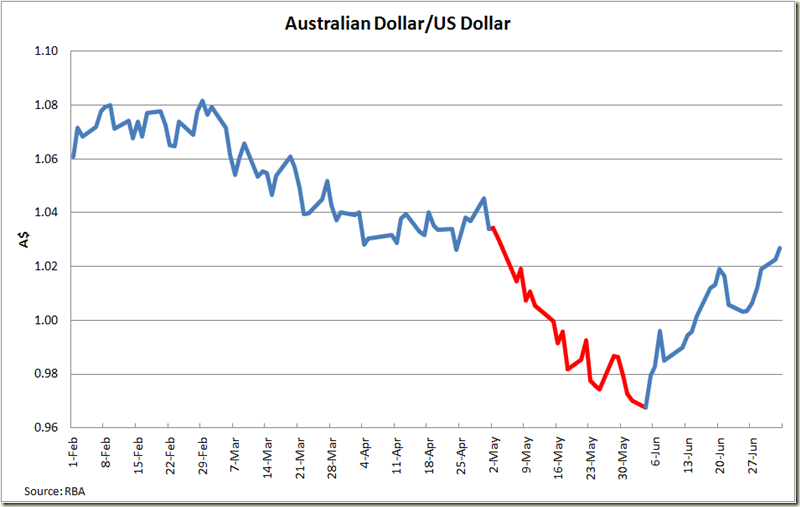 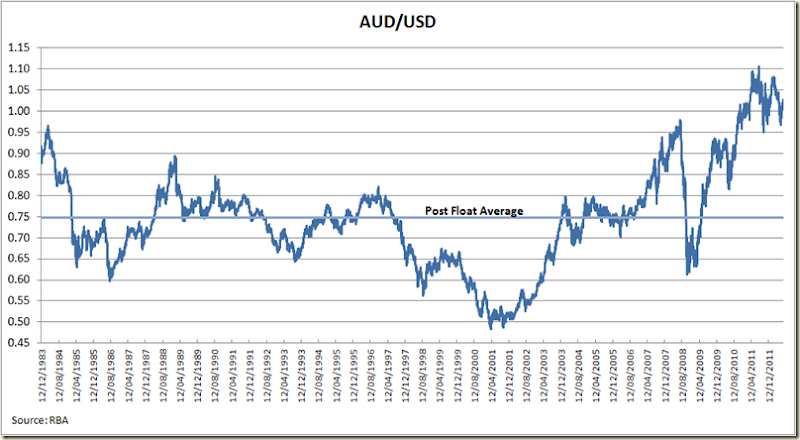 As a result of the sequence of earlier decisions, there has been a material easing in monetary policy over the past six months. At today's meeting, the Board judged that, with inflation expected to be consistent with the target and growth close to trend, but with a more subdued international outlook than was the case a few months ago, the stance of monetary policy remained appropriate.

In other words – things are okish at the moment, and things might get worse later so let;s hold our fire while inflation is not an issue.

The other data release today was the Building Approvals by the ABS. The news was quite good: 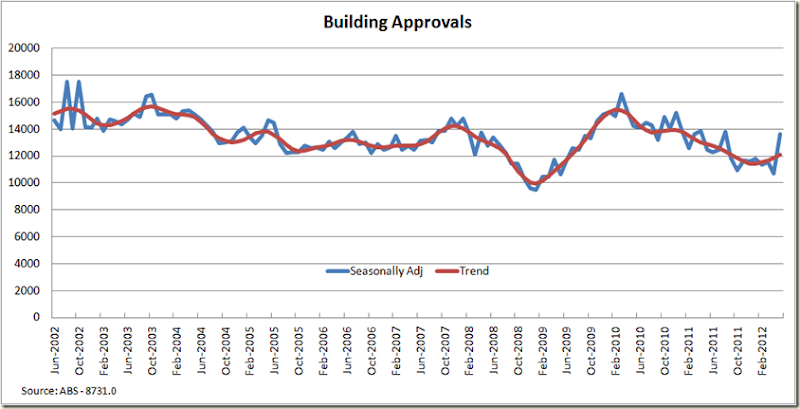 And a look at the 12 monthly growth of total building approvals does show improvement: 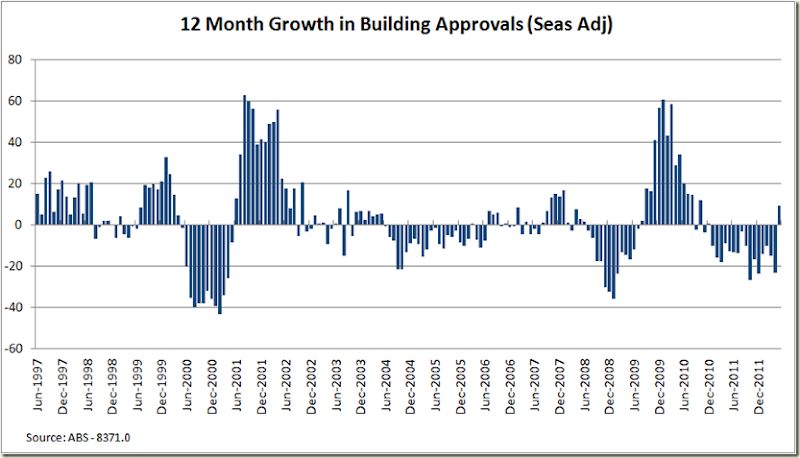 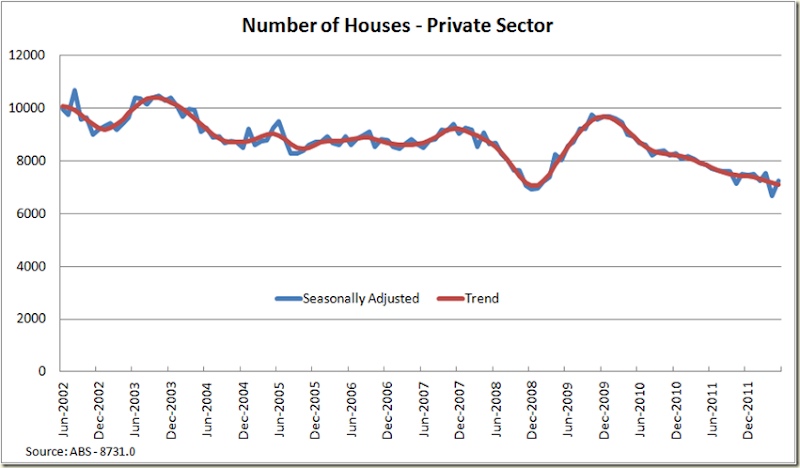 Anyone betting on another housing boom like in 2001, would be better off spending that money on the lottery: 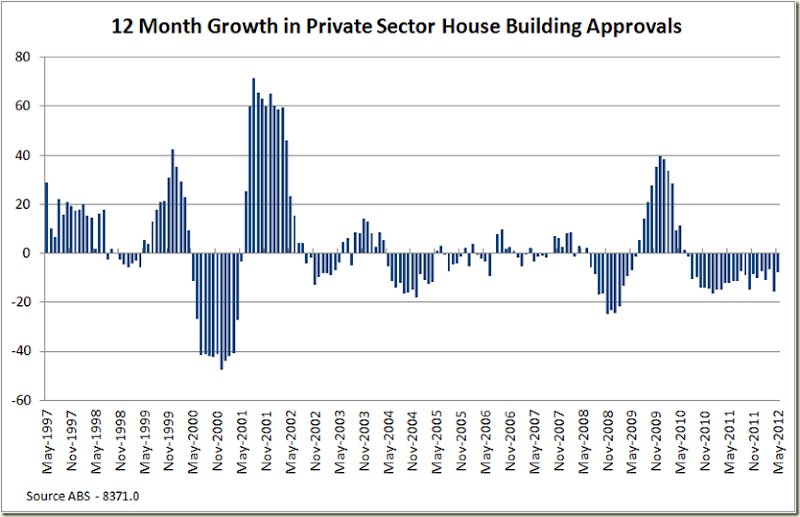 With housing growth like that, don’t expect the RBA to be worrying about increasing interest rates any time soon.