2009 was a very strong year for Aussie films. They took a 5.0% share of the box office (up from the 10 year average of 4.4%), and we had 5 films that earned over $3 million at the local box office (Australia – in 2009 it added another $10.6m to its 2008 total – Mao’s Last Dancer, Knowing, Charlie and Boots and Samson and Delilah). There’s been some rhubarb in the press about the Alex Proyas film, Knowing being called “Australian”, but Proyas revealed today that it was granted the 40% tax rebate known as the Producer Offset (for which a film has to pass a Significant Australian Content test to get), so bugger it, it’s officially Australian, let’s not get too defensive and leave it out of the figures due to some pathetic cultural cringe. 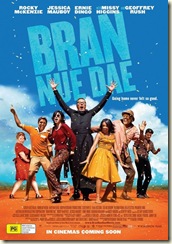 2010 is looking to be just as good. Already Bran Nue Dae has earned $3.7 million in Australia after just 2 weeks.  This little film is proof positive that if you get a good cast and create a film that actually makes people feel good it has a bloody good chance of making some money. After all who would think that an Aboriginal musical would make more than a film starring Clive Owen and directed by Scott Hicks, or more than Jane Campion’s latest?

Make fun films people! (and fun doesn’t have to mean happy – it just means you come out of the cinema thinking, “wow! that was amazing”, not thinking “oh geez… that was very… err thought provoking and sad”).

Over in America the vampire action/horror flick Daybreakers has made US$28.2m – an excellent result given it cost around US$20m to make, hasn’t opened anywhere else yet, and has had to go up against Avatar.

So that’s 2 hits this year for sure.

Also up this year is the big budget animation Guardians of Ga’Hoole, the long awaited movie adaptation of the John Marsden novel Tomorrow When the War Began. This one should be huge given the massive built in audience of the books; if it is any good it should go well past $10m in this country, and more overseas. Others of note is the World War I flick Beneath Hill 60 and the long awaited (ahem) sequel to The Wog Boy, Wog Boy 2 - Kings of Mykonos. Personally I don’t hold out much hopes for the film, but then again I hated the first, so what do I know.

Also worth looking forward to is Philip Noyce’s adaptation of Tim Winton’s Dirt Music – this has been in development for ages (how long? well it originally was going to star Heath Ledger, and it was first talked about in 2002), so if it actually gets on the screens let’s hope it is worth the wait. There’s also Nadia Tass and David Parker’s latest, Matching Jack, but they really haven’t done anything decent since The Big Steal in 1990, so this is a bit of a “we’ll see”. 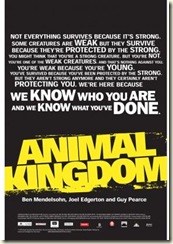 The one film I have real hopes for is the Melbourne crime film Animal Kingdom. Written and directed by David Michod, it’s set within the grimy world of crooked cops and Melbourne’s underworld. Underbelly on the big screen? Perhaps, and if so, about bloody time. It stars Ben Mendelsohn, Guy Pearce, Joel Edgerton, Jacki Weaver and newcomer James Frecheville.

It is currently screening in competition at the Sundance Film Festival, and it has garnered some amazing reviews. From movie website, Dark Horizon comes this:

There’s a touch of a young Scorsese evident in his film, but with a very distinctive Australian, laconic bent, coupled with episodes of uncompromising violence, all of which defines the film’s often narcissistic characters. Visually, the film is striking…

Animal Kingdom" has Shakespearean qualities in its portrait of betrayal and paranoia, yet its very definitive Australian tone sets it apart from its Hollywood counterparts. This is a smart, compelling masterwork, a wonderful feature debut and a film destined for both Australian domestic and international success.

Scorsese and Shakespeare  in the one review? Wow. How about influential film mag Movieline:

This first brush with the law results in a slow and total unraveling of multiple lives, which Michôd depicts with the poise, intellect and a minimum of the too-cool stylistic flourishes usually reserved for Michael Mann…

Add those subtle (and not-so-subtle) shocks to the sublime performances by Michôd’s ensemble and moody, expressive cinematography by Adam Arkapaw, and the reboot of the American crime saga — the birthright of heirs to Mann, Martin Scorsese, Francis Ford Coppola and select others — may actually have its roots Down Under. Who knew? Maybe everyone — and soon if Sundance buyers are smart.

Australian director David Michod makes an exciting and assured feature debut with Animal Kingdom, a wrenching Melbourne-set gangster saga about a teenager coming of age in a crime family.

Michod’s accomplished film should rally critics in the US and other English-speaking territories, pushing it beyond the arthouse public. In the unlikely event that Animal Kingdom fails to crack the US market, Michod (whose short films have played at many festivals) has a persuasive calling card for work in Hollywood. Asian territories should also respond well to this gritty family saga.

Those are some amazing reviews for such a film by a relatively unknown director. It certainly has whet my appetite for the film, as does the brilliant teaser trailer, which despite using no dialogue is utterly gripping: 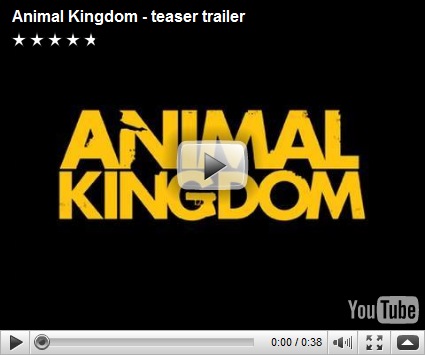 Two good years in a row for Aussie film? Next they’ll be calling it a Golden Age!