Flick of the Week: “I want to say one word to you. Just one word.”

This week’s Flick of the Week, takes us with Dustin Hoffmann from All the President’s Men to his first major film role of Benjamin Braddock in The Graduate.

I first saw this film when I was 17 and living in Japan. It had been recommended to me by a Canadian mate of mine, who was also in Japan on an exchange. We shared a pretty similar taste in movies (and most other things – music, sport, beer) and he told me it was an absolute must see. It was.

I think now, looking back, that it was one of those life changing films. I’m not actually sure just exactly how it changed my life, but I feel in some sense that it coloured a good portion of my life for the following 5-6 years (at least until after I actually graduated from uni). Although the film was made to reflect the generation of baby boomers moving from teenage life to adulthood in the sixties, the film struck an incredible chord with me, a member of Generation X (who like all good Generation X types, hated the term Generation X). There was so much in the film that spoke to me – mostly about the absolute incomprehension I had concerning what I wanted to do with my life. It was probably my A Catcher in the Rye (perhaps because I never read A Catcher in the Rye). 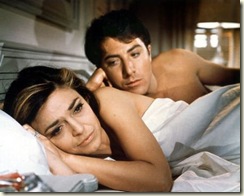 I recall how in Year 12 my friends and I who were planning on going to uni would muse about the subjects we would study, and we would attempt to come up with combinations that we laughingly used to say would enable us “to pick our job”. We would come up with combinations like Japanese and Law, or Economics and Japanese (for some reason Japanese was seen to be the language to learn). And there I was, a year later, in Japan learning Japanese and about to return home to begin an Economics degree.

And I had no idea what the hell I wanted to do with my life.

Like all good teenage angst type films, when you look deeply into it The Graduate is a deeply depressing film – few in the film are happy, few have any hope. Everyone seems stuck in a rut – even Benjamin when he begins his affair with Mrs Robinson (played by Anne Bancroft, in what should have been an Oscar winning role), the affair which was seen to be a break from the norm becomes itself a routine that is played out to the level of monotony. And yet the film is also filled with humour – but often of a very bitter, jaded kind. 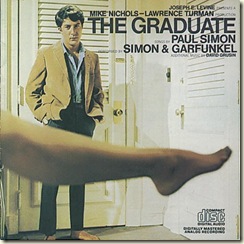 Looking back at the film, critics often refer to the use of the Simon and Garfunkel songs throughout. And indeed that was a beginning of films using popular music on the soundtrack (though I’d argue American Graffiti was the film that really kick-started the concept), however when you watch the film what registers is how the music is mostly used during deeply despondent periods – “April Come She Will” is played while Benjamin goes through the motions of his life with Mrs Robinson in bed to then doing nothing at home with his parents; “Scarborough Fair” plays as we see Benjamin in deep despair over Elaine Robinson (played by Katherine Ross, who was never better).

Famously Dustin Hoffman was sure he would be fired while shooting the role, as he felt nothing like the character – who in the novel on which the film is based, is blonde and typically “Californian”. His awkwardness however works perfectly, especially in opposition to the consummate assuredness of Bancroft’s Mrs Robinson. The film was a hit (according to Box Office Mojo, it is the 17th highest grossing film all-time – accounting for inflation – earning in 1967 the equivalent of $628 million in 2009 terms) and Hoffman was nominated for his first Oscar (he’s been nominated 7 times for 2 wins), and his career never looked back.

There are so many wonderful set pieces in the film that keep me coming back – the opening welcome party with Ben being confronted by Mr Maguire who has just one word to say to him – plastics; the brilliant seduction scene – complete with the immortal line of “Mrs Robinson, you’re trying to seduce me” (a line which has been oft parodied – perhaps best in American Pie, which gave it a nice post modern twist with the elder woman asking the question of the the younger male (it was also parodied by Dustin Hoffman himself when he guest-starred on The Simpsons); Benjamin trying to get a hotel room (“Are you here for an affair, sir?”); Benjamin standing on the bottom of his parent’s pool wearing a scuba diving outfit; and of course the great final scene at Elaine’s wedding.

The film still speaks to me, even though I am now closer to the age of Mr Robinson than I am to Benjamin – perhaps though now it provides a more wistful feeling than it once did – no doubt due to the fact that twenty years after first seeing it, I still don’t know what I want to do with my life!

In 1999, the film was named by the American Film Institute as the seventh greatest American film of all-time – a position I think is a tad high – top twenty maybe – though it would easily be in my top 10 favourite films (actually top 5).

The rather execrable film, Rumor Has It, was a kind of sequel – working on the premise that the story of The Graduate was based on real people. I advise you to avoid seeing it. Instead rent or buy this great movie.

The following is an excellent clip that demonstrates the perfect use of the Simon and Garfunkel music and captures the desolation and despair Benjamin feels. 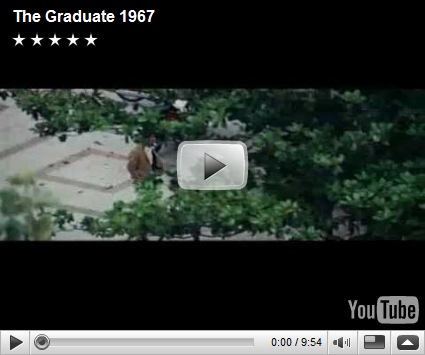