Flick of the Week: “Gene, the Odyssey is dying.”

This week’s Flick of the Week takes us with Ron Howard from American Graffiti to the first directorial “big picture film” about “failed” Apollo moon mission, Apollo 13. 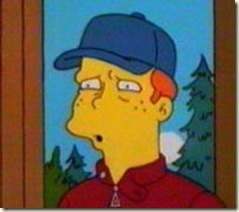 After finishing up Happy Days, Howard turned to directing – most likely because he realised his best acting work would come in The Simpsons . Ron Howard is a director for whom the phrase “workmanlike” is a pretty oft used description. Your pulse doesn’t get racing at the words “a new film by Ron Howard”; he’s no Scorsese, Spielberg or Ridley Scott. He doesn’t go over the top huge like James Cameron, the closest he probably is in spirit to is Clint Eastwood – both do good solid work, but perhaps Clint has the advantage of age and experience that puts him above Howard.

Apollo 13 is a perfect example of Ron Howard’s work. It is a good story, it is told well, but it doesn’t feel too life changing. When it was released it was often compared by critics to Phillip Kauffmann’s The Right Stuff, and mostly poorly, not because Apollo 13 is bad, but because it is just so safe. The script does all the right things, it has all the characters saying the right words to make everyone feel proud to be American etc etc… and it’s a good two hours of entertainment. But it just lacks… something... call it art.

Howard’s resume is full of such films – Working Class Man, Backdraft, The Paper, EdTV, A Beautiful Mind. They’re all good films, but seriously, no one has ever said, sorry I can’t go out tonight, Backdraft is on TV. This century he has improved (though I can’t really comment on the Da Vinci Code films): Cinderella Man was an impressive sports film (put it this way, it is much better than Clint Eastwood’s latest, Invictus) and Frost/Nixon is easily his best film.

Apollo 13 starred Tom Hanks in the middle of his greatest most popular actor in the world period. Check this out for a run of films from 1993 to 2000:
A League of Their Own (“Nobody cries in baseball!!”)
Sleepless in Seattle
Philadelphia (Oscar)
Forrest Gump (Oscar)
Apollo 13
Toy Story
Saving Private Ryan
You’ve Got Mail
The Green Mile
Toy Story 2
Castaway

Look, I hate The Green Mile, and have serious issues with Saving Private Ryan, but geez, what a run. No one has ever had a run like it: 11 films, and all 11 were successful, and pretty much stand up well today – ok You’ve Got Mail is dated, but it’s still good rom-com work. At this point Hanks was called “this generation's James Stewart”, which was disingenuous to both actors – because while Stewart was perhaps the greatest film actor of his time (maybe all-time) even he never had a run like Hanks’s (mostly because he was around in the studio era where you had to appear in some B pictures). Let’s just hope Hanks doesn’t end up appearing in films of the calibre of Airport 77 when he gets old.

Apollo 13 also has a great cast full of what Bill Simmons calls “that guy from” actors. There’s  Clint Howard  (who is the brother of Ron, and consequently is in many of his films), Chris Ellis , Loren Dean, and Joe Spano. It also boasts a great supporting cast of Kevin Bacon, Gary Sinise, Bill Paxton and Ed Harris (who was actually in The Right Stuff).

All in all it’s a good film, that was probably unlucky to lose the Best Picture Oscar to Braveheart (though I wouldn’t have given it to either film). It tells a story that you know the ending of well, keeping up good suspense, and has fine acting. Sure it’s not life changing, but not every film needs to be, and at least this is one film that you might find yourself saying, “hey Apollo 13 is on TV, let’s watch that. ” 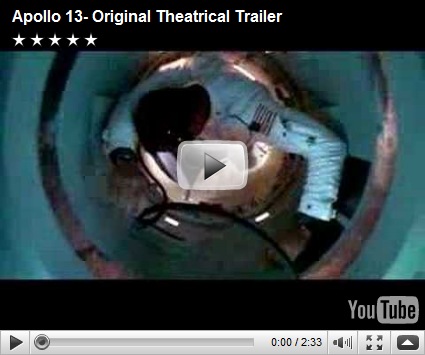