Flick of the Week: “Let me have a Three Musketeers, and a ball point pen, and one of those combs there, a pint of Old Harper, a couple of flash light batteries and some beef jerky.”

This week’s Flick of the Week takes us from The Graduate, to George Lucas’s classic coming of age tale, American Graffiti. 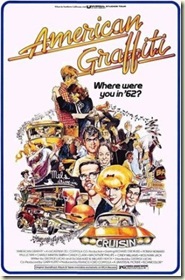 The connection is Richard Dreyfus, who had an uncredited cameo in The Graduate as a guy in Dustin Hoffmann’s boarding house who says, “Do you want me to get the cops? I’ll get the cops.”

Back in 1990 when I noticed it was him, I felt pretty cool that I spotted it. Now of course you can find out about such things on imdb, which kind of takes away the joy of being a film buff. But oh well, on to 1962
American Graffiti could just about be called the most influential film of the 1970s. Just think of how many films were made in the 1970s and 1980s that were set in the 1950-60s in America. Everything from Dirty Dancing to Back to the Future mined that so called innocent period after Elvis Presley but before The Beatles and the JFK assassination. In actual fact such movies more recreate a Hollywood view of history than the reality of the time itself, and pretty much all of them don’t hold a candle to the original.

The film concerns the last night in town before two friends, Curt Henderson (Richard Dreyfus) and Steve Bolander (Ron – or Ronny – Howard), leave for college. They hang out with their nerdy friend Terry ‘the Toad’ Fields (Charles Martin Smith), and hot-rod driver John Milner (Paul le Mat), before all go their separate ways over the course of the night, on various adventures. Curt gets mixed up with a gang of thugs as he tries to find out the identity of a blonde woman he fleetingly saw drive past; Steve tries to breakup with his girlfriend Laurie (Cindy Williams), only to be beaten to the punch; Toad tries in vain all night to score with air-head blonde Debbie Dunham (Candy Clark); and John gets stuck with young Carol (Mackenzie Phillips – who has the line of the film “Your car is uglier than I am. That didn't come out right.”) in his hot rod while he drives around looking for a Bob Falfa (Harrison Ford) who is challenging him to a drag race.

By the time the night has ended, the group have made some decisions about their futures, changed a bit, learned a bit… it is one of those nights that after which no one is the same again… and sure it’s a cliché, but when you’re young there are nights that can feel like that, and this film taps in to the feelings of youth as good as any film does.

George Lucas struggled to get financing for the film – Peter Biskand relates in his seminal work Easy Riders, Raging Bulls: How the Sex-Drugs-and-Rock 'N' Roll Generation Saved HollywoodEasy Riders, Raging Bulls, that Warner Bros turned it down – a move that pretty much cost them any chance of working with Lucas in the future. United Artists had the rights to it and the next film Lucas wanted to do – some dopey space opera – but they passed on both. Universal Pictures finally came up with some money – but few thought it would be anything other than a small film; it ended up being the 3rd highest grossing film for the year, behind The Exorcist and The Sting). Lucas shot it in 28 days, and according to co-producer Francis Ford Coppola he got “lucky”, because Lucas (as you can tell from any of the Star Wars films he has directed) knows bugger all about how to direct actors, and yet everyone turns in a great performance.

Many of the actors in this film pretty much can thank it for starting their careers, and yet if you were to have asked filmgoers at the time who of the cast would be the most likely to become a huge star, few would have picked the bloke playing Bob Falfa (which is not much more than a bit part), and most would have lumped for Paul le Mat. The young Vietnam Veteran however never clicked it for a role in another big film, whereas Ford, after appearing in Coppola’s The Conversation and a couple made-for-TV films, got cast in that dopey sounding space opera as Han Solo, and well you know the rest… 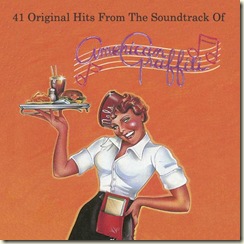 The biggest influence of the film was its soundtrack. Taking a lead somewhat from Easy Rider, it used contemporary music rather than a score. But whereas Easy Rider was set in the present time, this was the first film to use it to convey the sense of a time past. It would of course be used again and again since then (ever heard of the soundtrack for The Big Chill?).  The soundtrack for the film was massively successful, and set a template for film marketing that would dominate the 1980s.

The other frequently copied aspect of the film was the ending which relates what happens to the characters after the film ends. Unfortunately we only find out what happens to the male leads, and have no idea what becomes of Carol or Debbie. The ending – especially given the news on what happens to the characters is rather downbeat. The film is actually a rather honest look at youth – the night is far from a glorious romp – in fact most of the time the characters are frustrated by being unable to do what they want to do. It is a look back that on the surface seems to be of the “oh things were so much better back then” but upon deeper inspection you see that the night was actually bloody long and often boring, and geez, you’d never want to go back.

The film has for me another nice connection – that of one of my favourite episodes of The Simpsons (Summer of 4ft 2) where Homer goes into a store to buy illegal fireworks. His method is brilliant parody of the Toad’s attempt in American Graffiti to get some alcohol (Old Harper). It always gets edited out whenever it is shown on TV (probably due to the “adult” items in Homer’s list of things he wants to buy:

The main problem of the edit is the next scene shows Marge looking at the shopping bags and saying: "I don't know what you have planned tonight, but count me out."

American Graffiti may have led to some pale imitation, and a very long running TV Show (Happy Days – not directly, but without the film’s success, the TV show would never have been made), but the original deserves re-watching. For those who have never seen it, seeing the young stars will surprise (Dreyfus in particular looks like a kid), and at the least you’ll be able to say you’ve seen the best film George Lucas ever made. 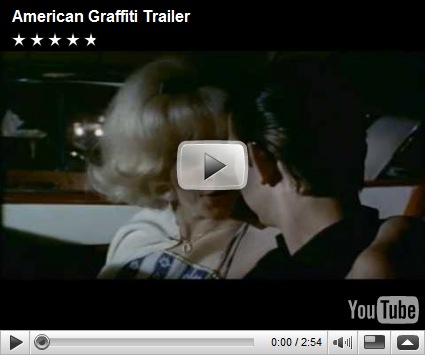