Flick of the Week: “They doubt our ancestry, but they don't say the story isn't accurate”.

This week’s flick of the week takes us with Jason Robards from Once upon a Time in the West to his Academy Award winning role as editor of The Washington Post, Ben Bradlee, in the great All the President’s Men. 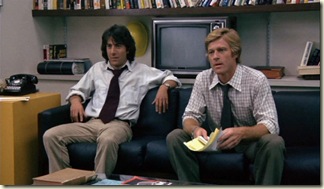 The film of course recounts the work done by journalists Bob Woodward and Carl Bernstein as they unravelled the Watergate Affair that brought down Richard Nixon. Robert Redford (who also produced) stars as Woodward, and Dustin Hoffmann played Bernstein. At the time the two were about as big a stars as there were going around; perhaps only Steve McQueen and Paul Newman were bigger. And the story they were telling was as big as it gets. In fact the story is so big that it almost overshadows the film – to discuss the film is almost to discuss Watergate; and to discuss the impact and quality of the film you have to try and divorce yourself from the impact of the events depicted.

The script, written by William Goldman, is a cracker. There was a lot of angst in the writing of the script – Goldman recounts it all in his absolutely fantastic book, Adventures in the Screentrade (a MUST read if you want to be a screenwriter, or want to know anything about film). The director, Alan J Pakula kept wanting rewrites, and when the final draft was done, suddenly Carl Bernstein and his partner Nora Ephron (she would go on to write When Harry Met Sally and Sleepless in Seattle) turned up with a completely new script. Goldman finally read it (after getting a legal ok to do so) and he thought it absolute garbage. It was full of things that didn’t happen in real life and it also made Bernstein out to be quite a hit with the ladies. Luckily that version of the script was dumped save for one scene of Bernstein lying his way into the office of the Dade Country District Attorney (and that scene was made up).

Goldman’s script is ingenious because it ends with the two reporters stuffing up. They have implicated Nixon’s chief of staff, Hal Halderman, as being involved in the cover up, and it turns out the source they were relying on gave them bum information. A lesser screenwriter would have kept the story going till Nixon resigns. Goldman figured everyone knew that part of the story; he realised once it got to the point of Nixon being involved, the handing over of the tapes, the hearings, him going on TV and saying he is not a crook etc the audience would be able to fill in the gaps themselves, and in fact the journalists become less important. Goldman instead focussed on the events that led up to Nixon being involved – the less well known points, the how-it-happened moments, rather than the what happened as a result of them moments.

Redford and Hoffmann work brilliantly together – they bounce off each other, their dialogue overlapping, and they also convey the reality that Woodward and Bernstein were uneasy collaborators. Bizarrely neither was nominated for Best Actor. 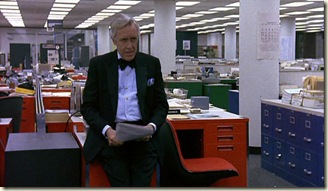 The supporting cast of old character actors playing The Washington Post editorial team are just brilliant – Robards gets all the good lines, and he delivers them with relish; Jack Warden as local news editor Harry Rosenfeld is a pure joy. The scenes of the editors putting the paper together are great to watch and are wonderfully directed by Pakula.  Apparently the first draft of the script had to be reworked because these scenes were too funny and The Washington Post staff were worried they’d look like comedians. In fact Goldman had sat in on a few meetings and used lines verbatim from those meetings.

The other key to the greatness of the film is the cinematography by Gordon Willis. Willis, who shot The Godfather movies, was the supreme artist at shooting in the dark – and his work shooting the scenes of Woodward and Deep Throat in the car park are legendary.

I first saw this film when I was in Year 8 or 9 and I knew I wanted to be a journalist (didn’t happen, but hey I also wanted to be a pilot after seeing Top Gun!). I wanted to be like these guys and bring down a Government. I know I wasn’t the only one who felt that way, and in some ways this film (and Watergate) have been the bane of journalists. There’s a tendency to see Watergates everywhere, to say after any slight revelation that, like Watergate, it’s not the crime but the cover-up that brings you undone. I get the feeling Malcolm Turnbull had watched this film once too often, and thought he could be Woodward and Bernstein and bring down Rudd over the Godwin Grech emails.  He of course forgot the big lesson from the film, that in bringing down a conspiracy you have to build from the outside; if you shoot too high and miss, everyone feels more secure…

The film was nominated for 8 Academy Awards. It won four – Editing, Sound, Supporting Actor (Robards) and Screenplay. It lost Best Picture to Rocky. I doubt that would happen if there were a revote (though it would face stiff competition from Taxi Driver and Network). It is the great journalism film, the one by which all others are judged – its influence is seen in films as light as The Pelican Brief and the more serious State of Play. But perhaps because this depicts real events, this is the one that resonates the most, and is the one which in years to come will still do so.

Below are two scenes that are great for different reasons. The first shows Woodward being a journalist (the good thing about the film, it shows the work being done) and getting a scoop on a cheque found in the Watergate burglars’ bank account. The scene is brilliantly shot by Pakula – focusing on Woodward in a long uncut shot – and has great acting by Redford – not his face when Dahlberg says he really shouldn’t be telling him this. The second scene is the final meeting of Woodward and Deep Throat; it is so iconic it has been parodied by The Simpsons, and for that if no other reason I show it. 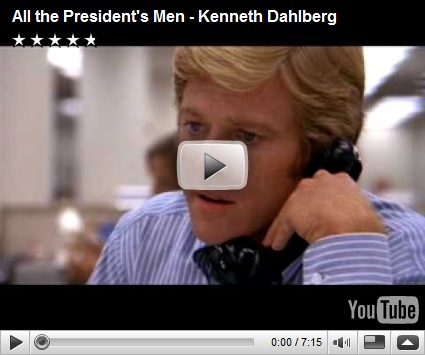 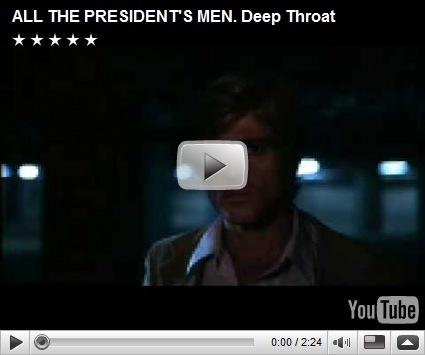 Ben Bradlee:  Once when I was reporting, Lyndon Johnson's top guy gave me the word they were looking for a successor to J. Edgar Hoover. I wrote it and the day it appeared Johnson called a press conference and appointed Hoover head of the FBI for life... And when he was done, he turned to his top guy and the President said, "Call Ben Bradlee and tell him fuck you." I took a lot of static for that--everyone said, "You did it, Bradlee, you screwed up--you stuck us with Hoover forever." They were right – I screwed up but I wasn't wrong. [He gives the pages with the story that John Mitchell knew of the cover-up to Bernstein]. Run that baby.

Great movie, I've probably watched it about a half a dozen times. It really nails the atmospherics of the early seventies politics, the "ratf%$king" of the dirty tricks brigade - the implosion of the Democrats, the paranoia of a nation at war and at war with itself.

Carl Bernstein: Boy, that woman was paranoid! At one point I - I suddenly wondered how high up this thing goes, and her paranoia finally got to me, and I thought what we had was so hot that any minute CBS or NBC were going to come in through the windows and take the story away.
Bob Woodward: You're both paranoid. She's afraid of John Mitchell, and you're afraid of Walter Cronkite.

Also I saw it again around the time of the AWB scandal, and I couldn't help thinking how deep-throat's advice to Woodward could just as easily have been said about most of the staffers working for the previous government.

"Deep Throat: Forget the myths the media's created about the White House. The truth is, these are not very bright guys, and things got out of hand."

Sums up what happened at Watergate perfectly.